US response to protests in Cuba, Colombia and Brazil reveals its self-serving hypocrisy - Canary 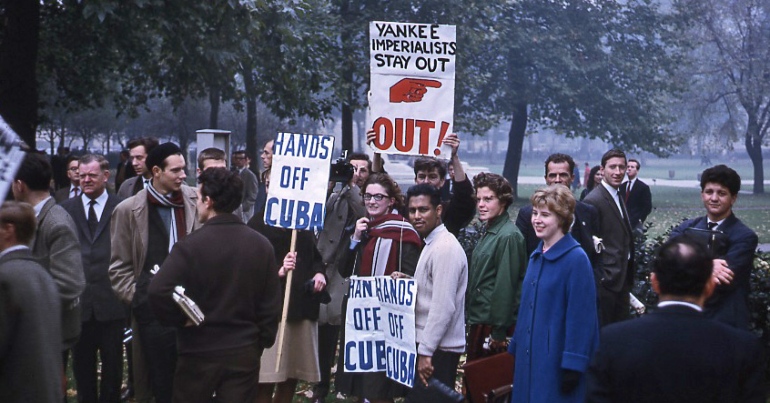 Cuba has recently seen a wave of protests erupt throughout the country. Inevitably, the US is using the protests as fresh justification for heightening its decades-long policies of regime change and coercive sanctions. Some are even calling for direct military intervention into the Caribbean island nation.

On the surface, it might appear perfectly reasonable that the US respond to a wave of protests in a nearby country. But the reality is that the US’s aggressive policies toward Cuba, along with its history of intervention all across Latin America, means that it has zero credibility.

Moreover, a regional comparison with other Latin American countries shows that Washington is highly selective in how it responds to anti-governmental protests. And this ‘selective indignation’ shines a revealing light on the self-serving hypocrisy that lies behind its entire foreign policy stance.

Protests decrying shortages, but the US is the real culprit

On 11 July, demonstrators took to the streets of Cuba. It’s currently unclear what their primary grievance against the government was. Some reports, especially those from right-leaning publications, claim that they were primarily motivated by the ‘authoritarianism’ of the Cuban government and its handling of the coronavirus (Covid-19) pandemic. Others reports, however, present the demonstrators as primarily motivated by shortages, particularly of medicines.

This latter explanation seems to be the more plausible. The reality is that Cuba has suffered from shortages for decades. And far from being largely the fault of the Cuban government, shortages and economic hardship more broadly have overwhelmingly been the result of the so-called ’embargo’. More accurately described as an ‘economic blockade’, the US has unilaterally imposed this crushing set of sanctions for almost 60 years. This is in spite of overwhelming opposition from the majority of the United Nations General Assembly, regional institutions, and mainstream human rights organizations.

Despite this record, members of the Cuban-American exile community, along with some US politicians, are now preposterously claiming that the US is best placed to ‘liberate’ Cuba. The mayor of Miami, the hinterland of the Cuban-American exile community, has even called for a US military intervention. Hopes that US president Joe Biden would return Cuba policy to that of the Obama administration have been dashed by statements made in the wake of the protests. In 2014, former president Barack Obama implemented a normalization of diplomatic relations but kept the blockade in place.

Worse still, the Washington Post and New York Times have both reported that Biden’s Democratic Party is using the protests as a way of pivoting further to the right on Cuba policy. This has an electoral calculation at play given the ‘swing state’ status of Florida, where most Cuban-American exiles live. Evidently proving this supposition, Biden’s public statements seem to now be appropriating the rhetoric of Cuban-American hardliners, such as referring to the Cuban government as the Cuban “regime”.

The need for nuance

To be clear, we shouldn’t reflexively dismiss the grievances of those protesting in Cuba. And nor should we maintain that there are no legitimate criticisms of the Cuban government. But a comparison between the US’s reaction to the protests in Cuba with its reactions to similar protests elsewhere in the region reveals stunning hypocrisy. And this double standard is a result of the way facts are manipulated in order to serve Washington’s interventionist agenda.

As The Canary has reported, 2021 has seen huge protests in two other Latin American countries – Colombia and Brazil. In Colombia, demonstrators took to the streets to protest the government of president Iván Duque. Though sparked initially by Duque’s imposition of a crushing austerity program, the protests morphed into a broader mobilization against his government. Amongst the demonstrators’ major grievances was Duque’s handling of the coronavirus pandemic.

Brazil, meanwhile, has seen mass mobilizations against the far-right government of Jair Bolsonaro. As The Canary reported in January, activists organized protests against his government in over 20 state capitals across the country calling for his impeachment. This call was based primarily on his handling of the pandemic, which has been among the worse in the world. Like other far-right leaders, Bolsonaro has at times engaged in what one Brazilian lawyer described as “denialism towards the Covid pandemic”.

Yet there have been no calls from Washington for the overthrow of the Colombian or Brazilian governments. The reason why is straightforward: Colombia and Brazil are both US allies. Colombia has been a particularly staunch US ally for decades, while Brazil gained this status more recently during the Trump presidency. This was thanks in large part to Trump’s ideological affinity with the fascistic Bolsonaro.

In a cruel irony, both the Colombian and Brazilian governments actually have worse records on pandemic response than Cuba. As The Canary reported in April, Brazil recorded the highest daily coronavirus death count in the world. In June, it became the second country in the world to reach the milestone of 500,000 coronavirus-related deaths. Also in June, the New York Times reported that Colombia became the 10th country to pass the 100,000 Covid-related death mark.

Cuba, on the other hand, has generally dealt with the pandemic better. It recently became the first Latin American country to develop its own vaccine. And it has even sent doctors abroad to help others deal with the pandemic as part of its long-established program of medical solidarity.

But what about democracy?

Supporters of regime change in Cuba might ask: But aren’t Brazil and Colombia democracies which can actually remove their leaders whereas Cuba isn’t?  Well, not quite. Though Cuba’s status as a democracy is contested, there is more nuance to this matter than is usually understood. For example, Cuba actually holds non-partisan elections including those for its legislature, the National Assembly, and neighborhood committees. And even the president is elected, albeit indirectly by the National Assembly.

Moreover, the Cuban revolution aspires to transform the country into a grassroots ‘participatory democracy’ rather than a traditional multi-party ‘liberal democracy’. Reasonable people can disagree about whether or not this is a good thing. But the fact remains that the US, the wealthiest and most powerful country in the world, often shamelessly sides with right-wing parties in elections all over Latin America by providing financial and logistical support. The US has also rigged elections in favor of its preferred side and propped up dictatorships so long as they are obedient to US interests.

Indeed, when you look around the rest of Latin America, it doesn’t seem that ‘liberal democracy’ has served many countries there all that well. And Brazil and Colombia are, in fact, prime examples of this. Because their status as democracies is actually quite dubious.

Colombia is one of the most dangerous countries in the world to be a social activist or trade unionist. So left-wing political organizing literally means risking one’s own life. Meanwhile, Colombia Reports reported in 2020 that the party of the country’s major right-wing figure Álvaro Uribe has “never won a presidential election without the admitted help of drug traffickers”. In other words, violent criminal organizations play a major part in determining the outcome of elections.

Since Bolsonaro’s entrance to the national stage, meanwhile, Brazil’s status as a democracy has also dwindled. As The Canary has reported, in the run-up to the 2018 election in which he came to power, political allies of Bolsonaro in the judiciary engaged in a politically-motivated campaign to derail his main opponent’s campaign. Based on bogus accusations of corruption, the plot was subsequently uncovered by the Intercept, but by then it was too late. This tactic of misusing the judicial system for political ends has been dubbed ‘lawfare’. As The Canary has reported, it has been used as a tool against the left elsewhere in Latin America, including Ecuador. Bolsonaro has also praised Brazil’s brutal military dictatorship and openly spoken of purging the country of political opponents from the rival Workers’ Party.

Clearly, this reality exposes the US’s flagrant lack of evenhandedness in terms of how it treats Latin American countries. Washington’s treatment of its neighbors to the south is determined purely by each country’s obedience to US interests, not concerns over democracy, human rights, or freedom of expression and association. And so its feigned concern for the wellbeing of people in Cuba is simply a ruse to galvanize its self-serving interventionist agenda and appease the Cuban-American exile community. If Washington really cared about the Cuban people, it would lift the blockade and perhaps pay compensation for the billions of dollars in damage it has already caused.