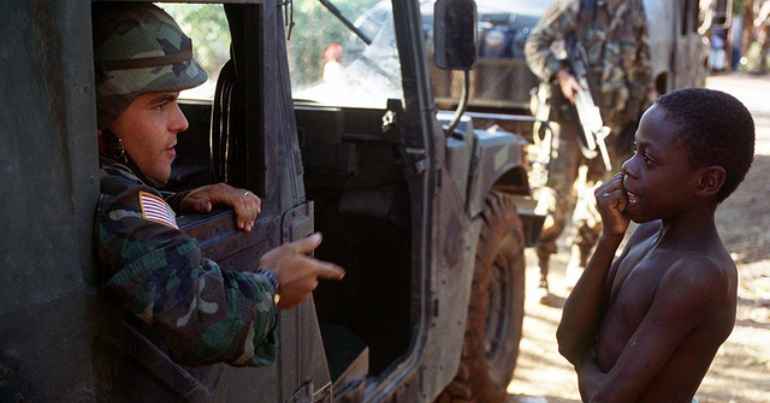 The assassination of Haiti’s president has been dominating international headlines for several days now. Reports have been trying to make sense of this latest development in an already highly complex situation on the ground. Much column space, for example, has been devoted to speculation over the identity of the assassins and their potential motives.

But to focus on this would be to miss a much wider point. Haiti has a long history of suffering under imperial domination. And this latest development may well serve as the next pretext for Western intervention. Already, one of the US’s major corporate-owned media outlets has argued in favour of “international intervention”. And that’s an early indication that the impoverished nation may well be in store for the next round of foreign interference and all of its attendant pathologies.

In the early hours of 7 July, Haitian president Jovenel Moise was assassinated in his house near the country’s capital Port-au-Prince. Leaders across the world have universally condemned his assassination. That includes US president Joe Biden, British prime minister Boris Johnson, and UN secretary-general António Guterres. Even fierce critics of Moise joined in the condemnation.

Moise had been in office since 2017 following a controversial election that brought him to power the previous year. After a presidential election in 2015 was ultimately annulled amid low turnout and mutual accusations of fraud, Moise won with over 50% of the vote, thereby avoiding a run-off election. Since then, he had been engaged in near-constant conflict with political opponents, particularly over the correct length of his term in office.

His presidency had been characterized by heavy-handed rule and growing authoritarianism. Moise also prevented many local and lower-level national elections from going ahead. This led to chronic poor governance throughout the island. Nonetheless, the US, United Nations (UN) and Organization of American States generally backed him. In the weeks leading up to his death, the country was rocked with continuous rounds of civil unrest protesting his rule.

Suspects already under arrest or killed

Reports on the status of suspected perpetrators seem to be ever-changing. Though as this article went to press, The Canary understands that Haitian authorities have arrested as many as 17 suspects while killing another seven. Much speculation has surrounded the identity and motives of the assailants. Some reports have described them as “mercenaries”. Others claimed they were posing as agents of the US Drug Enforcement Agency (DEA).

However, the more interesting question is: What comes next?

A history of both oppression and resistance

Haiti has a long history of both being at the receiving end of foreign interference and aggression, and of resisting it. Imperialist powers have arguably never forgiven the Caribbean island for its slave revolt in the late 18th century. The revolt succeeded in ejecting Haiti’s original colonial overlord, France.

In 1991, the country’s first democratically elected president Jean-Bertrand Aristide was ousted in a US-backed military coup. Following mass mobilizations in his support, then-US president Bill Clinton’s administration returned Aristide to power in 1994. But Washington nonetheless pressured him into upholding many of the right-wing policies that the military junta had implemented after his removal.

After five years in opposition, Aristide was re-elected president in 2000. But it wasn’t long before he again faced removal by the US and its allies. With the assistance of Canada and France, US troops kidnapped Aristide and exiled him to Africa. In the aftermath of this second coup, UN troops acting on behalf of Western powers propped up a brutal dictatorship. The latter then proceeded to murder several thousand Aristide supporters. Ever since, Haiti – the poorest country in the Western Hemisphere – has suffered under successive right-wing governments that have imposed crushing neoliberal measures.

Now, history appears to be on the verge of repeating itself. Just days after Moises’ death, the Washington Post – one of the major organs of US interventionism – published an article titled Haiti needs swift and muscular international intervention. Written by its editorial board, the article states:

To prevent a meltdown that could have dire consequences, the United States and other influential parties — including France, Canada and the Organization of American States — should push for an international peacekeeping force, probably organized by the United Nations, that could provide the security necessary for presidential and parliamentary elections to go forward this year, as planned.

Note that these are some of the exact same actors that were instrumental in previous coups against Aristide, and propped up the dictatorships that replaced him. So this is exactly what Haiti doesn’t need right now. And as The Canary has previously argued, the US has meddled in over 80 elections in 47 different countries since the end of World War II. The idea that it’s best placed to preside over clean elections is, therefore, utterly laughable.

A return of Aristide?

What Haiti really needs is to be left alone. It needs to be allowed to organize elections and elect a new government free from Western interference. Neutral, non-imperialist countries would be better placed to provide any assistance and oversight should the Haitian people request it. Sadly, Aristide’s party has been banned from every election held since 2006. But perhaps this might present an opportunity for him to re-enter the political arena and lead the country once again.

Featured image via US National Archives