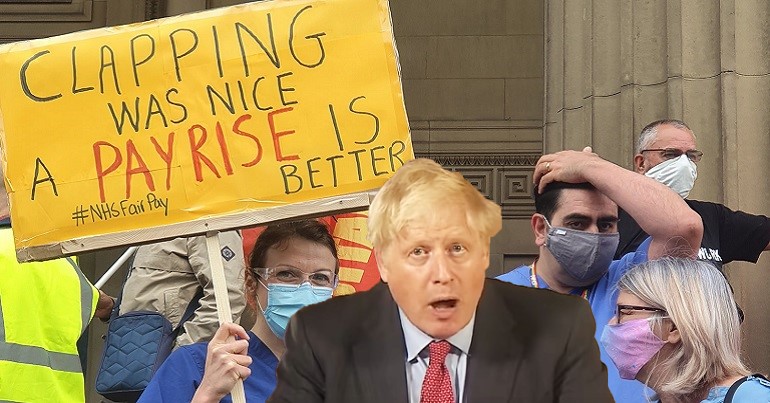 NHS workers are about to take the fight for a decent and fair pay rise right to Boris Johnson’s door. Here’s how you can get involved.

This year, the Tory government is only giving NHS staff a 1% pay rise. And people aren’t happy. Not least because of the coronavirus (Covid-19) pandemic. Moreover, people are upset because in the past decade, many public sector workers had a real terms pay cut. So, NHS organisations have spoken out and trade unions are incensed.

But one group is taking the action two steps further. Because not only has it launched a massive petition, but it will also be taking a demo to the entrance of Downing Street.

The campaign group NHS Workers Say NO! said on its Facebook page:

Our pay award continues to be delayed, and we know that this Government have only recommended an insulting 1%!

Health Care Workers, now is the time to unite and send a clear message to this Government, PAY US WHAT WE ARE OWED!

It’s also been running a petition. It calls on the Tories to give NHS staff a 15% or £3,000 pay rise – whichever is the greater. As the petition states:

This pay rise is needed. It’s more important than ever as we are now overwhelmed in a second wave of Covid-19 and, with morale at an all time low amongst staff. A recent survey showed that 36% of nurses were thinking of leaving the profession.

As of 3pm on Friday 16 July, a whopping three quarters of a million people had signed the petition. You can add your name here.

So, NHS Workers Say NO! has now organised a demo along with the delivery of the petition to Johnson’s front door:

It tweeted the details:

NHS nurse and member of the group Holly Turner told The Canary:

The fact that over three quarters of a million people have signed the NHSPay15 petition is really heartening. We know from polling that the majority of the population do support a significant, restorative pay increase for NHS Workers as opposed to claps, badges and gestures which this Government favour.

It’s clear that NHS Workers have proved their worth over the past year, but this isn’t just about that. This is about clawing back a decade of real terms cuts to our pay which has left us and our patients increasingly vulnerable and at risk.

By going to Downing Street we hope to both draw attention to our campaign and also set the tone to the government, we’re fighting for what we are owed and we’re not stepping back till we achieve what we’ve set out to do.

The Canary will be covering the march and petition drop on 20 July. If the Tories don’t listen to over 750,000 people and NHS staff, then they truly are the ‘nasty party’.