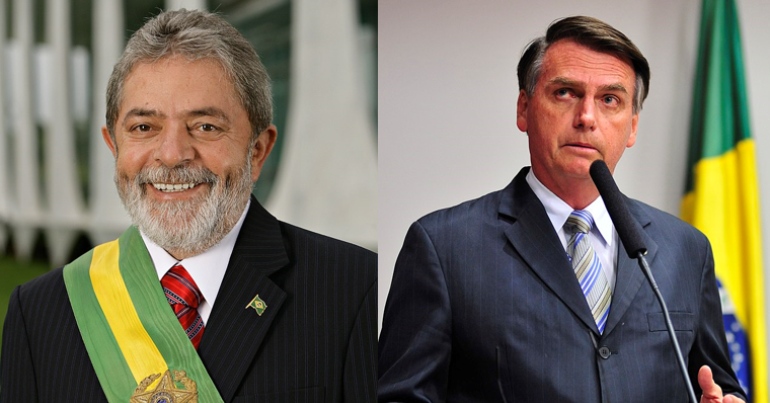 As The Canary has extensively reported, the presidency of current Brazilian premier Jair Bolsonaro has been a complete horror show. But there’s light at the end of the tunnel. Luiz Inácio da Silva, known colloquially as ‘Lula’, is one of Brazil’s most widely popular ex-presidents. And he’s indicated that he’s willing to run against Bolsonaro in the next election.

However, in the past powerful forces successfully conspired against Lula to keep him off the ballot. They’ll surely try to do so again, so he will have a hill to climb. But if he prevails, his victory would open an exciting new chapter in Latin America’s largest country.

Conviction annulled, opening the way for a third Lula run

On 15 April, Lula reaffirmed his intent to stand for the presidency in the upcoming 2022 presidential elections. That same day, Brazil’s Supreme Federal Court annulled a conviction that had prevented him from running in the 2018 election. This is the election which Bolsonaro ended up winning.

Lula tempered expectations by pointing to his age (75). And he indicated that younger candidates from his party should be given the chance to run. But opinion polls on a potential Lula/Bolsonaro face-off in 2022 put Lula in the lead. Moreover, no one else from the country’s political left has his level of name recognition and experience.

An iconic figure in Brazilian politics

Lula previously served as the South American nation’s leader between 2003 and 2011. He represented the social democratic Workers’ Party (PT in its Portuguese initials). And his election was of huge symbolic importance for many Brazilians. As a former metallurgy worker and trade unionist, he became the first working class person to reach Brazil’s presidency.

His progressive policies lifted millions out of poverty. And following decades of instability and dictatorship, he turned Brazil into an emerging economic and diplomatic powerhouse. As a result, he left office with an 80% approval rating. Former US president Barack Obama described him as “the most popular politician on earth”.

His successor to the presidency Dilma Rousseff was elected as the PT candidate in 2010 and then again in 2014. She continued to build on Lula’s legacy by investing in housing schemes and improving access to education. Her election was also symbolically important given her status as Brazil’s first female president and her background as a guerrilla resistance fighter during Brazil’s brutal military dictatorship.

In another politically-motivated farce, Rousseff was deposed via a constitutional coup in 2016. The coup was predicated on highly suspect allegations of budgetary irregularities. In a cruel irony, Michel Temer – the man who replaced her – was himself implicated in the infamous ‘Operation Car Wash’ scandal. The scandal roiled the nation for months and spilled over into neighboring countries. He ended up leaving office with approval ratings in the single digits.

The dirty tricks behind Bolsonaro’s rise

It was in the aftermath of this coup that Bolsonaro’s political rise began. As the 2018 presidential election neared, the PT chose Lula as its candidate. According to Brazilian electoral law, presidents are term limited, but only to two consecutive terms. This made Lula eligible to stand for a third time. Polls taken at the time showed him in a comfortable lead against Bolsonaro, who was initially viewed as a buffoonish outsider with a checkered and unremarkable political career in Brazil’s legislature.

As The Canary has reported, with a Lula victory looking likely, right-wing forces then conspired to sabotage his campaign. They did this by embroiling Lula in a criminal trail based on bogus corruption charges. Leaked files revealed that the main judge in the case, Sergio Moro, had been in cahoots with prosecutors as part of a politically motivated campaign to help their favored candidate, Bolsonaro. Lula’s subsequent conviction made him ineligible to stand as a candidate. This left Bolsonaro with the much lesser-known Fernando Haddad, PT’s replacement for Lula, as his main opponent in the race.

Bolsonaro ultimately won the election in a run-off against Haddad. But France 24 (the French equivalent of the BBC) reported that his campaign faced accusations of fraud as well as “spreading fake news on social media and violating campaign finance laws”. During the campaign, a group of public intellectuals and activists including Noam Chomsky released an open letter. It described Bolsonaro as a “fascist, racist, chauvinist and homophobic candidate, one who calls for violence and armed repression”. Before getting elected, he praised Brazil’s military dictatorship. And he’s openly spoken of imprisoning or driving political opponents out of the country. While a member of Brazil’s parliament, he told a female colleague that she was “not worthy” of being raped.

As president, some of Bolsonaro’s worst policies include opening up protected areas of the Brazil’s Amazon rainforest to development and reneging on land protections for indigenous Brazilians. He even invented the nickname “captain chainsaw” for himself and lamented that European settlers in South America weren’t as “competent” at massacring the indigenous population as their North American counterparts. In March 2019, In These Times reported that he has “unleashed an assault on workers and unions” and “has lowered the minimum wage, dismantled labor law enforcement and is threatening pension cuts”.

The Canary reported earlier in 2021 on mass protests against Bolsonaro’s handling of the pandemic. Discontent with his presidency now appears to span the political spectrum, with some figures from the country’s political right joining protests as well as those from the left. As a result, some public figures predicted earlier this year that he would eventually face impeachment. On 13 April, the Brazilian Senate launched an investigation into Bolsonaro’s mishandling of the pandemic.

Clearly, Brazil desperately needs change. And with Bolsonaro’s presidency on the ropes, there’s hope that Lula might deliver a decisive defeat to his fascist agenda next year.