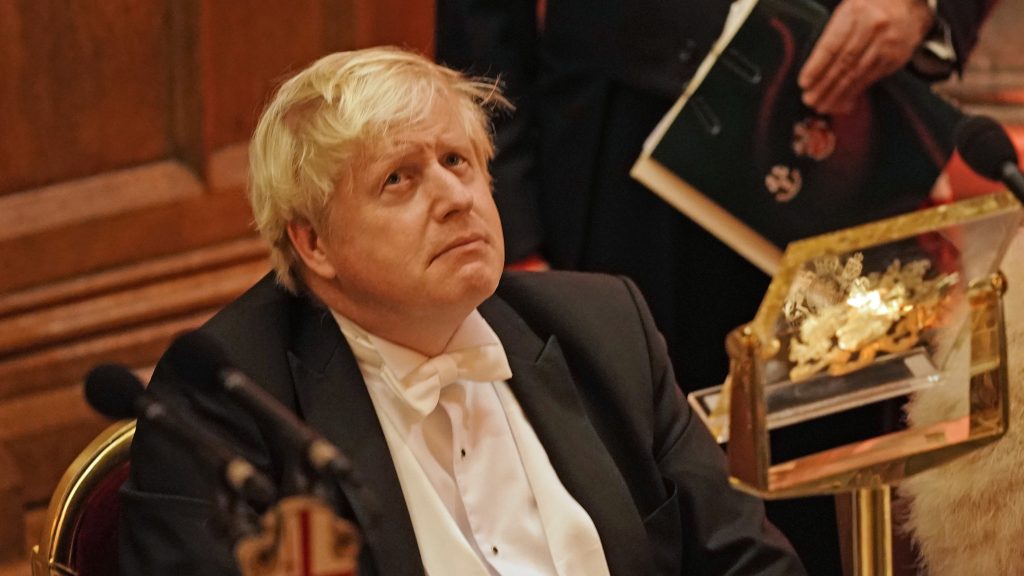 Boris Johnson has refused to apologise for his handling of the Westminster sleaze row amid continued frustration and anger among Tory MPs. The prime minister reportedly admitted he “crashed the car into a ditch” in the row over standards at Westminster in the wake of the Owen Paterson row.

After Boris Johnson admits he ‘crashed the car’ in his handling of the Owen Paterson scandal, aides quietly take it to the scrap yard to add to the others: pic.twitter.com/soFtvi1PUS

“Not really been thought through”

Deputy prime minister Dominic Raab insisted the government is committed to “fixing the problem” but Chris Bryant, the chair of the cross-party committee tasked with detailing the plans to tackle MPs’ second jobs, said the prime minister’s proposals had “not really been thought through very properly”.

At a private meeting of the Conservative backbench 1922 Committee on 17 November, Johnson took responsibility for the government’s botched attempt to get Owen Paterson off the hook after he was found to have broken the rules on paid lobbying. Johnson reportedly told the gathering:

On a clear day, I crashed the car into a ditch. I will get the car out of the ditch

On 18 November, however, he appeared to distance himself from the comments. On ITV News, it was put to Johnson that “you have told colleagues you crashed the car, you’ve even said you had regrets”. He replied:

I don’t think I actually used those words.

Following Boris Johnson’s admission that he “crashed the car” over the Paterson affair, the question on every media watcher’s lips is whether the PM will abandon his bid to put Paul Dacre into the Ofcom job – another bending of rules and a second car smash in the making

Pressed five times on whether he would say “sorry”, Johnson said:

I’ve said what I have to say.

Raab acknowledged the government has a job of work to do to restore morale within the Conservative ranks after seeing the party engulfed by allegations of Tory “sleaze”. Asked on Sky News about discontent within the party, he said there is always “one or other disgruntled individual” who is prepared to complain anonymously in the media. Pressed on whether that means there is no general unrest, Raab added:

Not sure I’d put it in that idyllic way. There’s always debate amongst MPs, but the most important thing is we’re fixing the problem.

Naga Munchetty – Boris Johnson told Tory MPs that he crashed the car when it came to handling the Owen Paterson case… do you have faith in the PM's judgement?

On 17 November, the Commons backed Johnson’s proposals to ban MPs from taking paid political consultancies and to limit the time they can spend doing second jobs. However, only 297 MPs, fewer than half the total, voted for the motion, with opposition parties abstaining. Four Tory MPs even voted for a rival Labour motion which would have imposed a clear parliamentary timetable for implementing reform.

Raab said the Committee on Standards had been asked to deliver the details of the reforms in January and said MPs’ outside work could either be limited by time or amount earned. But Bryant, the committee’s chair, said he was worried the government was trying “to bounce everybody into a set of proposals which have not really been thought through very properly”.

Downing Street said that Johnson hoped that there could still be an agreement to take forward the proposals on a cross-party basis. Labour leader Keir Starmer told the PA news agency:

At the moment we are in a situation where he (Mr Johnson) ripped the rules up, he’s now desperately trying to back-pedal. We are always up for a conversation about how standards can be improved.

We put a very strong plan of action before the House of Commons yesterday, that would take place immediately, particularly in relation to second jobs, and the Prime Minister whipped his MPs to vote it down.

He pretends he’s had a conversion to standards for the first time in his life – that lasted about 24 hours until he then whipped his MPs to vote down a plan that would actually make a significant change. What we’ve now got is a weak proposal to have some further discussions. Discussions have been going on forever about standards – we don’t need more discussion, we need some action.

The Conservatives didn't change the rules last night and even if their proposals were implemented, it would affect fewer than 10 MPs.

The Conservatives just want to keep lining their own pockets.

Meanwhile, Labour stepped up pressure on Johnson to declare further details of what his free holiday in Spain in a villa owned by the family of minister lord Goldsmith cost. The PM declared the use of a VIP lounge at Heathrow, donated by the airport, worth the equivalent of £1,800, but has not published details of how much the villa would have cost. Johnson said:

I always declare everything in the normal way

🚨 Boris Johnson has declared part of the cost of his Marbella trip – an £1,800 stay in Heathrow's VIP Windsor suite before he set off. But still nothing on his use of the Goldsmiths' reportedly £25k-a-week villa.

Former Cabinet minister Robert Jenrick said the prime minister had been poorly advised when it came to reforming the standards system. He told ITV’s Peston:

Johnson’s appearance before the 1922 Committee was the culmination of weeks of pressure following the fiasco over the attempt to save Paterson from suspension. Former Cabinet minister Paterson had been found to have breached lobbying rules by the Parliamentary Commissioner for Standards but a government-backed amendment attempted to save him from suspension and overhaul the whole standards process.

The government U-turned on the idea after a backlash and Paterson resigned as an MP, but the saga kicked off a deep dive into standards in public life, with a focus on second jobs.