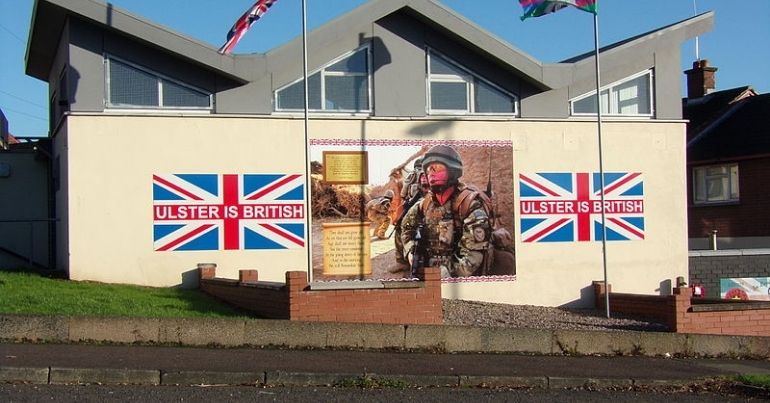 Senior Tories want to create an “official history” of the military occupation of Ireland.

The plans were first reported in the Telegraph on 13 November. Whitehall officials told the paper that the:

official history would be independent of ministers and would involve historians being appointed to produce a balanced historical record.

But critics say it will airbrush out British atrocities. Former Sinn Féin president Gerry Adams spoke out about the proposals. He stated:

This group of historians, appointed by the government, will they claim, be independent of the government. Mar dhea! Censorship and bias in the reporting of events and the interpretation and analyses of those events is a powerful weapon in any government’s arsenal.

Ex-Sinn Féin publicity director Danny Morrison told Irish News the move was a response to recent revelations. In particular, he said a rule change on suppressing particular groups being on television in the Republic of Ireland had rattled the British. The now removed Section 31 was a rule that effectively denied hardline Republican voices a platform on some Irish media. According to Morrison:

This is a reaction to the fact that certainly across Ireland, now that Section 31 is gone, that suppressed news in the 26 counties, they are now following the situation much more closely.

Morrison also said that the Tory plan is linked to documentaries like Unquiet Graves. The film looks at British collusion with murderous Loyalist gangs:

For example RTÉ put that film on by Sean Murray (Unquiet Graves) – documentaries like this and exposure of collusion upended the narrative that the IRA was the driving force behind the conflict.

Adams also argued that this “official history” is in response to the increased exposure of Britain’s actions in the north of Ireland:

They are also worried that the historic narrative is increasingly exposing Britain’s illegal and violent actions during those years.

Morrison said the history of collusion had already been buried, including in the Stevens Report into collaboration between Loyalist groups, British state forces and the police:

We have had the Stevens report into collusion suppressed, we were told it would be public and he was only allowed to publish 17 pages out of 3,000 pages in his report.

He said recent reporting showed a different story to the official narratives:

If you were to look at the killings by the loyalists, the RUC, the UDR and the British army under the rubric of killings on behalf of the state, in support of the state and the status quo, the statistics of the conflict then look a lot different.

But as Adams pointed out:

However hard the British government seeks to do this; however many revisionist historians they employ to bolster Britain’s view of history, the case of Pat Finucane; the importation by British intelligence of South African sourced weapons for Loyalist groups; the three reports by John Stevens; the role of state agents like Brian Nelson, and of the Glenanne Gang; the deaths of hundreds of victims; and the countless official reports by the Ombudsman and others into state collusion, will continue to haunt the British government. No amount of historical revisionism will change this.

The British state’s urge to rewrite it own history is hardly new. The underhandedness of the Tory plan will compound the sense of unfairness and trauma for those in Republican communities. And without justice, no meaningful peace is likely.