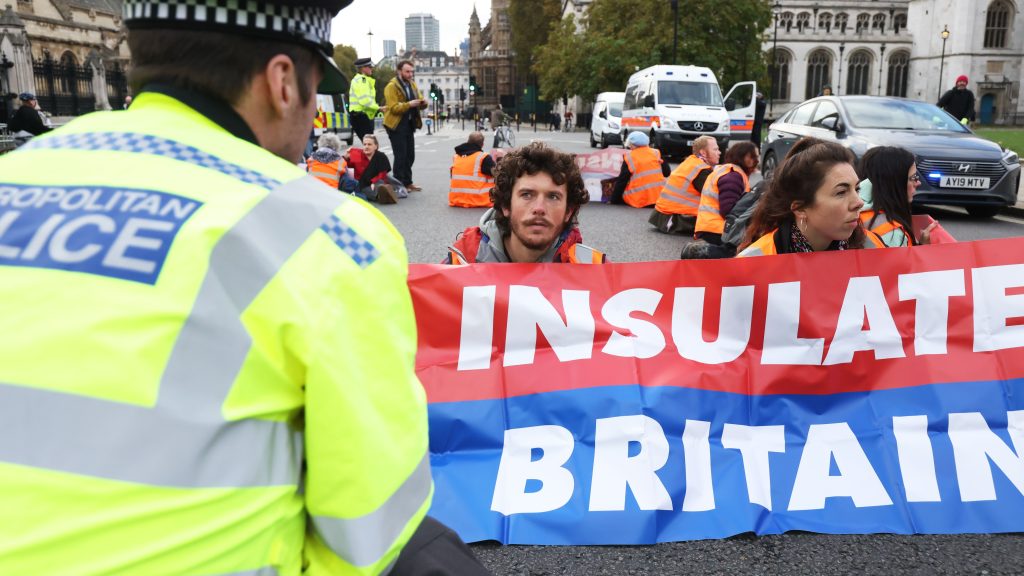 Nine activists from Insulate Britain were jailed for breaching High Court injunctions. They must now pay £5k each for National Highways’ claim for legal costs, judges have ruled. This amounts to a total of £45k to go towards the “excessive” legal bill.

The protesters were sentenced on Wednesday 17 November. It came after they admitted to breaching an injunction by taking part in a blockade, during morning rush hour on 8 October, at M25’s junction 25.

Smart is currently on hunger strike whilst in prison:

⚠️ Emma is now on #hungerstrike whilst in prison.

‼️Emma has chosen to not standby and be complicit in genocide as the government betrays us.

⏳Where do YOU stand?

Ben Taylor was given a longer sentence of six months “to deter (him) from committing further breaches”. It came after justice Victoria Sharp described his submissions to the court on Tuesday as “inflammatory” and a “call to arms”.

The judge, sitting with justice Martin Chamberlain, said there was no alternative to custodial sentences given that the group’s actions were so serious and they had made it clear they intended to further flout court orders.

Myriam Stacey QC, representing National Highways, previously said the legal costs of the proceedings were just over £91k. And she had asked the court to order the protesters to pay.

But in a written judgment after the hearing, the two judges ruled while it was fair to get the jailed activists to pay some legal fees, National Highways’ claimed costs were “excessive”.

The two judges also said it was not “reasonable” for three solicitors to attend the High Court hearing.

Sharp and Chamberlain ordered each of the activists to pay £5k towards National Highways’ costs, making a total of £45k. The judges concluded:

Insulate Britain has said it intends to continue the protests, which have sparked anger among motorists and others affected by the blockades, until the government agrees to insulate homes.

The High Court has so far issued five injunctions to prevent protesters from blocking roads.

They include one injunction granted to Transport for London (TfL) and four to National Highways, banning demonstrations on the M25, around the Port of Dover and on major roads around London.

The High Court granted TfL a civil banning order aimed at preventing protesters from obstructing traffic on some of the London’s busiest roads.

Those who breach the injunctions could face a maximum penalty of two years in prison or an unlimited fine.

Further committal proceedings are expected to be issued against other Insulate Britain protesters relating to protests on 27 October.

A protest is planned at noon on Saturday 20 November to show solidarity with the activists in prison:

🦺 9 in prison for standing up to the “systematic project of mass genocide, occurring in Britain”.

🇬🇧 📢 This injustice will not be forgotten.

🤔 Will you stand with us in solidarity with the #Highway9?