We must mobilise to save our NHS and #ScrapNHSBill - The Canary 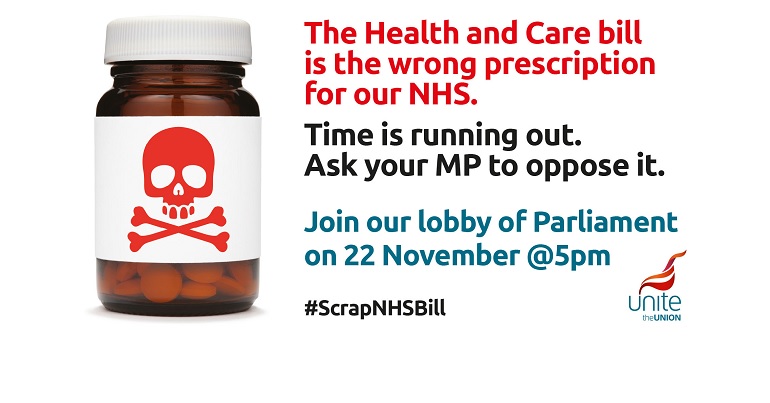 On 22 and 23 November, parliament will debate a bill that threatens the very future of our NHS. Our health service needs our support against the bill. So, a campaign group has organised a major protest with a clear goal: to #SaveOurNHS and #ScrapNHSBill.

The health and care bill

The Health and Care Bill is a piece of Tory legislation. It’s changing the way the NHS is organised. At the minute, Clinical Commissioning Groups (CCGs) are tasked with control of healthcare in different areas of England. But the bill will scrap these and replace them with Integrated Care Systems (ICSs). This is where the NHS and providers of its services will come together to deliver health care. The bill will make ICSs look at health and social care needs at a local level. It also aims to integrate health and social care fully. The bill further puts power with the health secretary to make decisions about local NHS services.

But of course, this is a Tory piece of legislation. So what it says on paper won’t necessarily be the reality – as one doctor previously wrote for The Canary.

will ensure that NHS England will share the responsibility of health service provision with councils and, most worryingly, private companies. The legislation will also further dilute our legal right to healthcare. It will do this by removing the NHS’s “statutory duty” to arrange hospital medical services.

He also said the changes will:

level down our NHS so that it comes to resemble the disastrous social care model that’s presently failing our most vulnerable populations.

And as Bevin noted in his article, overall the bill is effectively the ‘self-privatisation’ of the NHS – with, as Gill said, ICS boards “dominated by corporate interests”. This all means the Tories are making privatisation of the NHS even easier.

So what can we do about it? The first thing is to protest.

Keep Our NHS Public and #ScrapNHSBill

Campaign group Keep Our NHS Public and Unite the Union have organised a demo. It will take place 5pm Monday 22 November at Parliament:

Together we can send a message to the government that the Health and Care Bill is the wrong Bill at the wrong time.

Will you join us on the 22nd of November at 5pm??#SaveOurNHS #NHS pic.twitter.com/E7VHEQD4Do

Speakers include MPs such as Labour’s Richard Burgon, the currently independent MP Jeremy Corbyn, trade union reps, and campaigning frontline NHS staff such as Bob Gill and NHS Workers Say No’s co-founder Holly Turner. You can get involved online on the day using the hashtags #ScrapNHSBill and #SaveOurNHS. Along with the protest, Keep Our NHS Public was running a petition calling on the government to scrap the bill. It got over 112,000 signatures.

Also on 22 November, writer Dominic Minghella has organised #BooTheBill. Much like the coronavirus (Covid-19) pandemic ‘clap for carers’, he wants people to go out on to their doorsteps at 7pm. But instead of clapping, you need to boo the Tories and their bill:

The shocking NHS "Privatisation" Bill is in Parliament Monday and Tuesday.

It makes healthcare a privilege, not a right.

Nobody voted for this.
We clapped our NHS.
At 7pm on Monday, we stand again at our doors.
We *slow-clap* this sleazy Bill.
We make some noise.
We #BooTheBill

The Health and Care Bill is a clear and present danger to the NHS as we know it. By its very nature, the health service is something that belongs to all of us. Therefore, it’s up to all of us to protect it.