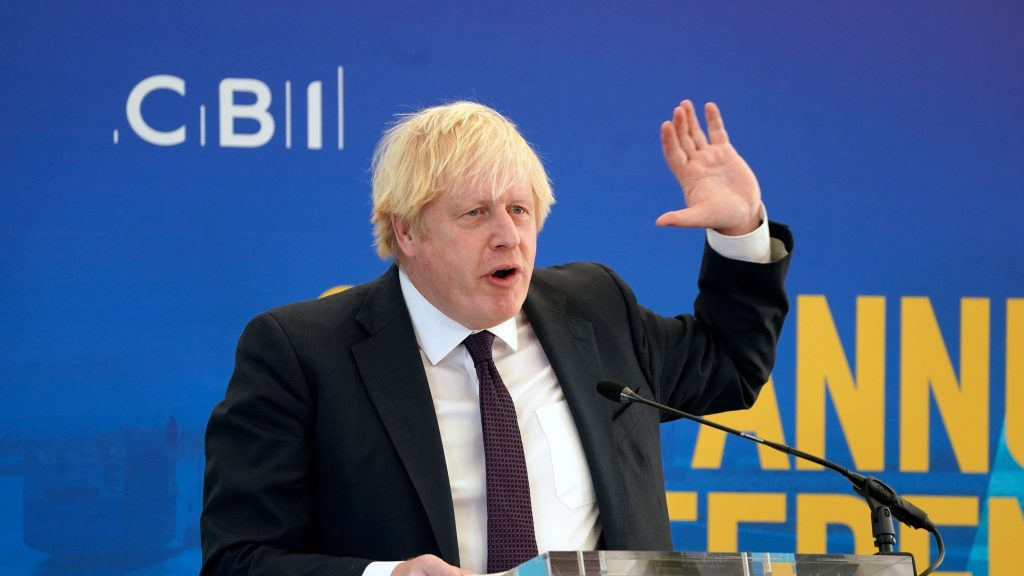 Boris Johnson stumbled through a major speech in which he lost his place in his notes, talked about a day trip to a Peppa Pig theme park and imitated a car, before insisting: “I thought it went over well.”

The prime minister’s keynote address to business leaders saw him struggle with his papers, at one point muttering “blast it” before shuffling sheets and begging the audience to “forgive me” as he tried to find the right point to resume.

The speech to the Confederation of British Industry was an attempt to set out how pursuing green policies could help in the “moral mission” to “level up” the UK. It will likely be remembered more for Johnson’s reflections on his trip to Peppa Pig World, comparisons with Moses, a reference to Lenin, and the spectacle of a prime minister of the United Kingdom making car noises.

Following the speech in South Shields, Johnson was asked: “Is everything OK?”

I think that people got the vast majority of the points I wanted to make and I thought it went over well.

Businesses are crying out for clarity. Instead, all they got was Boris Johnson rambling on about Peppa Pig.

It is a perfect metaphor for Johnson’s chaotic, incompetent Government as it trashes our economy, but it is not worthy of a British Prime Minister.

Johnson told the audience how he spent 21 November at Peppa Pig World in Hampshire, describing it as “very much my kind of place” but “they are a bit stereotypical about Daddy Pig”.

Praising the ingenuity of the private sector, Johnson said “no Whitehall civil servant could conceivably have come up with Peppa”, which had become a £6bn global business with theme parks in the US and China. The argument has been criticised online.

Peppa Pig co-creator, writer and director Mark Baker trained at the National Film and Television School whose founding was the direct result of a recommendation from civil servants at the Department for Education and Science for the creation of a national film school for the UK. https://t.co/dED6VGSu3L

Johnson’s admiration of the fictional pig trended on Twitter for a large part of the afternoon:

Has anyone noticed that while Johnson has been bigging up the creative industries (with his Peppa Pig talk) that the arts are being cut in schools and universities?

I wasn’t at Peppa Pig world yesterday Boris Johnson. I was strategising about how to #ScrapNHSBill. Your dreadful Bill will harm patients 🚨@EveryDoctorUK

Johnson also mimicked the sound of a roaring car as he said electric vehicles, while lacking the characteristic noise of a high-powered petrol engine, “move off the lights faster than a Ferrari”.

He additionally quoted Soviet leader Lenin as he said electrification will be the key to the new “green” industrial revolution:

The prime minister additionally compared his 10-point plan for a green economy with the 10 commandments in the Bible. It was “a new Decalogue that I produced exactly a year ago when I came down from Sinai”, he said.

Moses parted the Red Sea, @BorisJohnson just stayed at a friend's villa there! Suspect the CBI would have learnt considerably more from Peppa Pig. https://t.co/s132MoQrE6

Johnson defended his levelling-up agenda following criticism of scaled-back plans for new railways in the North and Midlands. Ministers announced last week that the eastern leg of HS2 between the Midlands and Leeds would be cut, while a promised Northern Powerhouse Rail link between Leeds and Manchester would run partly on existing tracks.

Tony Danker, director-general of the CBI, said the decision had “upset” businesses in the north of England. Johnson defended the rail proposals, describing the Integrated Rail Plan (IRP) as “transformatory”. He also argued that achieving his goal of addressing imbalances in the UK would help it become a bigger economy than Germany, saying:

It’s a moral thing but it’s also an economic imperative.

The prime minister said there would still be “massive gains” by a mixture of investing in new lines and upgrading existing track. He told the conference:

I must say that I thought, as a lesson in what happens when you tell the British people we’re investing £96 billion in the biggest railway programme for 100 years, some of the coverage was missing the point, let me put it that way.

So, Birmingham to Newcastle is 40 minutes quicker under the IRP; from Newcastle to London will have 20 minutes shaved off because of the upgrades to the East Coast Mainline.

You are mad as a railway enthusiast, which I am, to think that you always have to dig huge new trenches through virgin countryside and villages and housing estates in order to do high-speed rail.

He added that chancellor Rishi Sunak wanted to cut the tax burden for businesses but the government had to be “prudent” following £407bn of pandemic spending that had been “extremely tough for the taxpayer”. The PM also announced in his speech that new laws will see new homes, supermarkets and workplaces compelled to install electric car charging points.

The announcement on charging points is another step towards the banning of the sale of petrol and diesel cars in the UK by 2030.

James Mancey, operations director at Paultons Park, where Peppa Pig World is based, said the attraction was “delighted” Johnson attended on 21 November. He said:

The fact that Mr Johnson has chosen to speak at length about his visit during today’s CBI conference, positively endorsing the creativity and innovation showcased by Peppa Pig World and encouraging others to visit, is testament to the hard work of everyone at Paultons Park who create the wonderful experience our millions of guests enjoy each year.

Others suggested the shambolic speech may have been an attempt to draw attention away from the multiple scandals the PM has embroiled himself in:

Every time I switch on the TV expecting to hear the outcry at the Prime Minister having lied to the electorate about his social care plan all I hear is people talking about Peppa pig. I’m sure this wasn’t intentional..

It would be awful if everyone started talking about Peppa Pig instead our corruption, our plans to privatise the NHS or our bill to make the poorest people pay for the social care of the rich. #ScrapNHSBill pic.twitter.com/GIsd7tAybv