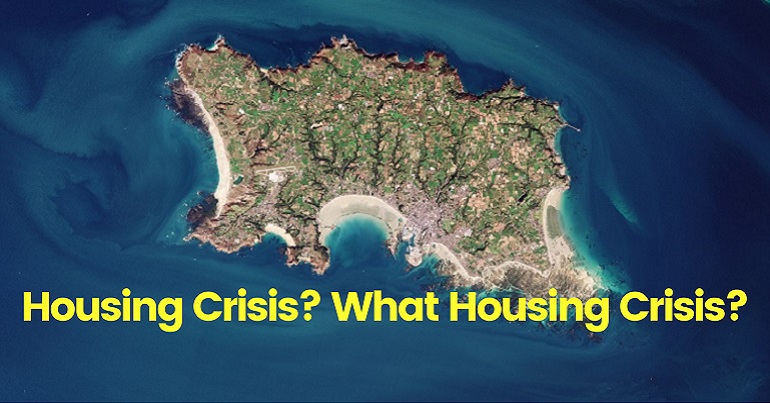 Jersey has a housing crisis. The Channel Island, known for its tax avoidance and wealth, is seeing its politicians presiding over chaos in the housing sector. The story is one of the have’s and have not’s. And so far, politicians have failed to tackle the issue.

Jersey is one of the richest places on the planet. In 2019, its gross domestic product (GDP) per person was £45,320 – that’s how much the countries’ total economic value divides out per person. This is compared to just over £32,500 for the UK.

Currently, the island has major housing problems. The average property price has rocketed by £100,000 in just a year to £634,000. Bear in mind this is far higher than even London (£507,253) and way above the England average of £287,895. Jersey has also had house prices increasing more than earnings for many years. It’s a similar story in the private rental market. In 2019, for example, average rents increased by 9%. This was more than the increase for the whole of the UK between January 2015 and December 2019.

Social housing rents are capped at 90% of the market rate. This is in stark contrast to England, where the figure is around 50%. In Jersey, around 14% of households live in social housing, “housing trusts” or on “parish rents” (2011 figures). This is lower than in England, which is 17% (2016-18) but higher than neighbouring Guernsey, which is under 10%.

The situation has led one politician to deem Jersey’s housing situation a “crisis”.

As ITV News reported, the government says only 15% of the properties on two new developments need to be affordable housing (this is not the same as social housing). On one development this would mean that 23 out of 150 homes will be affordable housing. This led the social democratic Reform Jersey Party leader senator Sam Mézec to say:

Jersey currently has around 2,000 applications on our first-time-buyers waiting list, and a further 1,000 waiting for social rental housing. For the government to propose building just 173 new affordable homes in these massive developments is clearly totally inadequate.

Mézec tabled a motion in Jersey’s parliament in June, calling on it to declare a housing “affordability crisis”. Parliament rejected this. Furthermore, according to some politicians, there is no housing crisis.

As the Jersey Evening Post reported, treasury minister Susie Pinel was at a Chamber of Commerce lunch. She’s part of the right-wing Jersey Alliance Party. When someone questioned her about the housing crisis, Pinel said:

Having travelled quite a bit, you can see in places like Africa and India a crisis and poverty. We do not have that here. We might have a challenge.

The one in four people in poverty on the island might beg to differ. But Pinel is not the only Jersey politician who thinks there’s no crisis. The Jersey Evening Post reported that assistant treasury minister and fellow Jersey Alliance Party politician Lindsay Ash said:

My view is the same. People seem to be using the word ‘’crisis’’ for everything. If England lose the World Cup, they would say that is a crisis. We have a big problem with housing in the Island, I have no doubt about that, but I do not think it is a crisis like in places like Calcutta, where [people are] lying in the street. We have a problem but we are addressing it already by building a substantial number of houses over the next few years

Clearly Ash is unaware of over 100 homeless people in Jersey, including an unclear number of rough sleepers. If she is unaware, it’s of little wonder. Because unlike the rest of the UK, Jersey has no legal definition of homelessness. This means that there’s currently no reliable way to gather statistics on the homeless population.

Not everyone at the Chamber of Commerce lunch failed to recognise the housing crisis. The Jersey Evening Post noted that one anonymous “business leader” said:

It is very sad that there seems to be such a disconnect between politicians and the reality of people’s lives in our Island. There are families in one-room apartments with sinks screwed to the wall in St Helier… but we are not as bad as Africa.

Solutions to the crisis seem few and far between. Even the left-wing Reform Jersey Party doesn’t appear to be going far enough. It recently proposed bringing the rent cap on social housing down to 80% of market rates – which is still way above England. The party also tried to introduce a policy that would ban above-inflation rent increases. But other politicians rejected it.

Jersey’s government is doing little. It plans to build 1,000 affordable homes by 2025. But with 3,000 households either on first-time buyer or social housing waiting lists, the numbers don’t add up.

Meanwhile, an independent panel published a report in January for the government on homelessness. It made eight recommendations:

The government has responded. It appears to have partly listened, and will be implementing some of the report’s recommendations. These include creating a legal definition of homelessness. But this is just one aspect of Jersey’s housing crisis. And the government still appears to be doing little to address the overall situation.

Jersey: a microcosm of society

Jersey’s position is a microcosm of society more broadly. On the one hand, the island has some of the wealthiest people on the planet living there. On the other, there’s homelessness, a lack of social and affordable housing, and one in 14 children sleeping in mouldy bedrooms. And of course, you have politicians pretending there’s no crisis. So, it seems that like with the rest of the capitalist world, very little will be done in the short term to fix Jersey’s housing crisis.