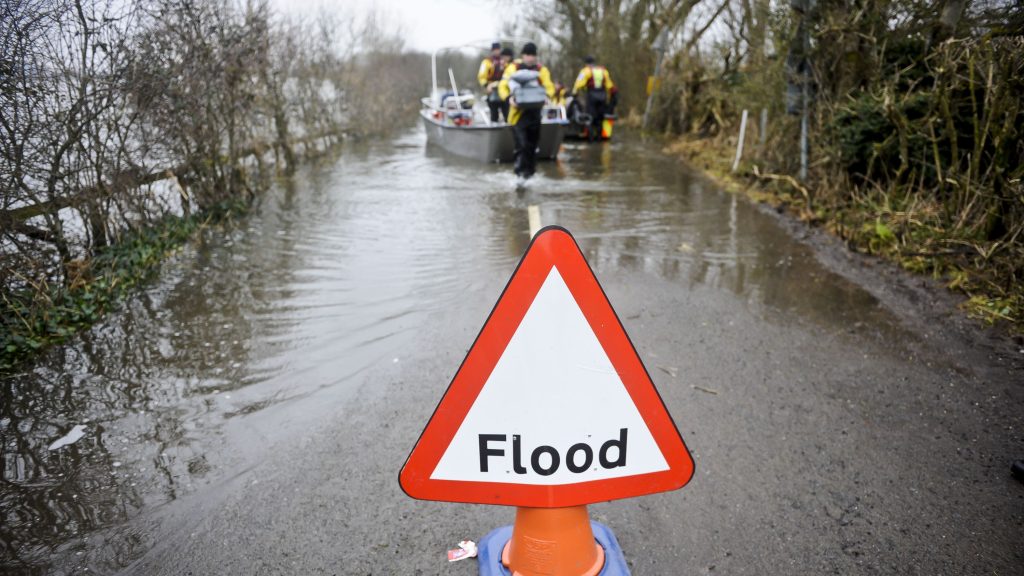 The UK is facing a higher chance of a wetter winter in the next few months, experts said, as households are urged to be prepared for the risk of flooding.

A Met Office outlook shows there is an above-average chance of the winter being wetter than normal over the three months from November to January, with the wetter conditions most likely in January next year and beyond.

With the potential for more wet weather and impacts from rainfall and winds, the Environment Agency is urging people to check their flood risk online, sign up for flood warnings and, if they are at risk, know what to do if flooding hits their home.

The call comes at the start of Flood Action Week, as the agency disclosed findings from a survey which suggested three-fifths (61%) of households in flood-risk areas did not believe their property could be affected.

While 70% of households in at-risk areas had taken some steps to prepare for their home flooding, 30% had done nothing – which if replicated across England could mean as many as 1.5 million homes at risk of flooding are unprepared.

In February, the chief executive of the Environment Agency, James Bevan, issued a stark warning about the impact of the climate crisis:

“We can’t prevent all flooding – climate change is only increasing that risk – and today’s figures show that while some people are prepared, many are not. Much higher sea levels will take out most of the world’s cities, displace millions, and make much of the rest of our land surface uninhabitable or unusable. Much more extreme weather will kill more people through drought, flooding, wildfires and heatwaves than most wars have.

The net effects will collapse ecosystems, slash crop yields, take out the infrastructure that our civilisation depends on, and destroy the basis of the modern economy and modern society.

If [this] sounds like science fiction let me tell you something you need to know. This is that over the last few years the reasonable worst case for several of the flood incidents the EA has responded to has actually happened, and it’s getting larger.

That is why our thinking needs to change faster than the climate. And why our response needs to match the scale of the challenge.

Caroline Douglass, executive director of flooding at the Environment Agency, said that its previous investment programme protected 314,000 properties from flooding, defences helped protect nearly 200,000 properties during floods since 2019 and the organisation was investing millions in building new schemes and making repairs to keep communities safe.

But she warned:  “Now is the time for us all to be vigilant, not complacent, about flooding.”

She further warned that climate change was happening, increasing the frequency and intensity of storms, pointing to Storm Christoph and other recent storms in the past few years which broke records for rainfall or river levels, as well as the deadly flooding in parts of Europe this year:

We can’t prevent all flooding – climate change is only increasing that risk – and today’s figures show that while some people are prepared, many are not.

It’s vitally important for the public to go online and check if they are at risk, sign up for Environment Agency warnings, and know what to do if flooding hits.