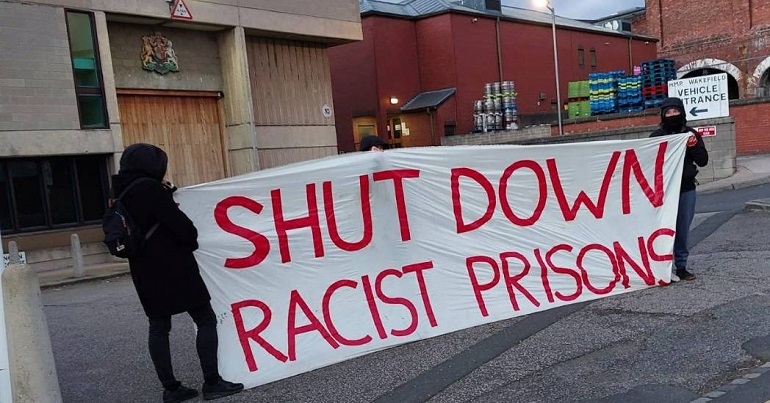 In September and October this year, The Canary published stories of alleged racism and Islamophobia in UK prisons. One of the prisons we mentioned was HMP Wakefield. Now prison solidarity campaigners have made further allegations of racist violence being committed by prison staff.

to demand an end to racist and inhumane treatment of prisoners kept in the segregation unit.

In the last month, prison guards have physically assaulted Black and Jewish prisoners, denied them access to food and letters, and encouraged one prisoner to attempt suicide.

At HMP Wakefield yesterday. Joined our friends in the seg shouting No Justice No Peace 💥💥💥#FuckHMP #FreeThemAll pic.twitter.com/FI1pIlqT6C

Michael Peters, a Black Jewish prisoner at HMP Wakefield, was assaulted by guards at least three times in his cell in segregation in October. As a result of this violent treatment, his mental health deteriorated and he became suicidal, making at attempt on his life on 25 October.

On 29 October, Peters was taken off close medical supervision, though he had told officers that he was still suicidal. Prison guards destroyed Peters’ possessions, including a television and kosher food that he requires as a practising Jew, and denied him access to the canteen, in what friends are calling acts of punishment for his suicide attempt.

ACS report that Gary, a campaigner and friend of Peters, said:

There is a clear pattern of medical neglect and abuse in the segregation unit at HMP Wakefield, targeted at Black and Jewish prisoners. Staff at HMP Wakefield are not only subjecting prisoners to the torture of solitary confinement, but also pushing them to suicide. This racist and inhumane abuse is not only wrong, it’s illegal.

The prison has also denied Peters, Shaqueille Plummer and Dwayne Fulgence – all Black prisoners – access to books and letters sen[t] to them, which campaigners have said [is] an attempt to isolate these men and take away materials vital to survival in the conditions of solitary confinement.

Anthony Snow also made a suicide attempt in the segregation unit at HMP Wakefield in September and too has experienced severe medical neglect from the prison.

This appears to be common

Allegations of such attacks on minorities in UK prisons are not uncommon. On 8 September, The Canary’s Tom Anderson wrote:

Muslim prisoners are subjected to systemic violence within the prison system. Just this year, The Canary has reported several alleged racist attacks on Muslim prisoners – coupled with the mistreatment and abuse of another – at HMP Full Sutton and Long Lartin. CAPE [Community Action on Prison Expansion] allege that one individual prison officer has carried out three attacks on Black prisoners who are practising Muslims at HMP Long Lartin over the past nine months.

last night a prisoner was attacked in @hmpbelmarsh seg: 5th attack this month.

When prisoners have their shirt over their face undressing for the search, Officers attack

The attack gets more aggressive when the prisoner calls for help, they think no-one will hear.

The chief inspector of prisons carried out an unannounced inspection of HMP Wakefield in June 2018. And while It found “HMP Wakefield to be an essentially respectful prison, with many examples of good relationships and interactions between staff and prisoners”, it also found:

In relation to use of force, the inspection found it “had increased” and in one case was “disproportionate”:

Use of force had increased since our previous inspection and was comparatively high, although one prisoner accounted for a disproportionate number of incidents. Over a third of incidents had taken place in the segregation unit. Documentation was reasonably well completed and gave a good account of what had happened, but was not routinely reviewed by senior managers.

That report noted that the segregation unit “was clean and cells contained adequate furniture and little graffiti”. However, it felt some people remained there too long:

Six prisoners had been segregated for more than seven months, with the longest for over 14 months. Exit plans took too long to implement and prisoners’ physical and mental well-being was negatively affected, especially if they had pre-existing mental health problems. Prisoners requiring transfer to hospital under the Mental Health Act also waited too long to be transferred and some very acutely ill prisoners had faced excessive delays.

Additionally, it found the frequency with which people could shower to be “unacceptable”:

While the number of those segregated had reduced, a considerable number of prisoners remained in the unit for too long, for an average of more than five months. While it was positive that an hour of exercise was offered every day, showers were generally provided only every three days, which was unacceptable.

ACS and others help to amplify the voices of those suffering on the inside. This is what one of those voices in the segregation unit wanted to say:

The world needs to hear about what’s happening to us in here.