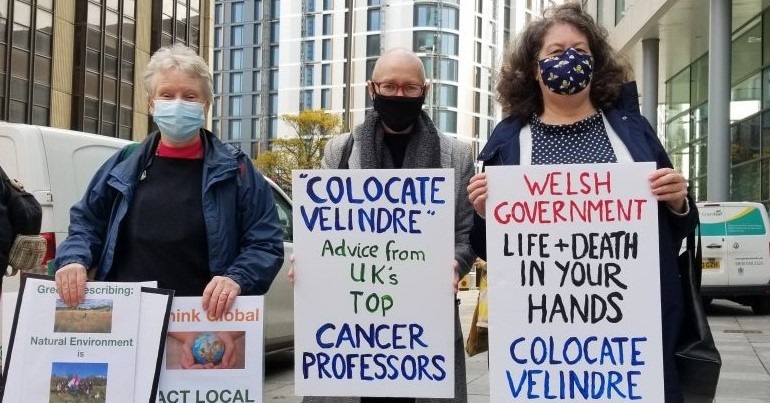 On 26 October, The Canary reported that campaigners had occupied a site at Northern Meadows near Cardiff:

This site is to be developed into a cancer care centre. Local campaigners want better cancer services but say Northern Meadows is the wrong location. Furthermore, they want to shed:

light on the human impact of 10 years of delays and £20 million in spending by Velindre [an NHS Trust].

On 17 November, the High Court upheld the decision to refuse a campaigner’s application for a judicial review into the decision to build the cancer centre. Campaign group Save the Northern Meadows believes:

Velindre have violated the trust of patients – past, present, and future; failing to cooperate with other health boards to create a cancer centre fit for the future, and suitable for patients, staff, and students.

Campaign to save Northern Meadows

The campaign to save this part of Cardiff has the support of environmentalists and people campaigning for better cancer services support. Velindre Cancer Centre plans to build a stand-alone centre on the Northern Meadows site. One campaign group argues it’d be better if they co-located the new cancer centre with the University Hospital of Wales.

Campaigner Tessa Marshall spoke to The Canary on 26 October. Marshall explained this space consists of three large meadows with a wide array of biodiversity. She said there’s also a wood that’s part of a public right of way and it’s a biodiversity site with species such as bats, hedgehogs, grass snakes, door mice, and owls that’s right next to a nature reserve.

I am really scared for my future if the current plan goes ahead as it is just not safe.

I am really lucky to have been able to get a place at The Prince Charles Hospital in Merthyr Tydfil for my chemotherapy, as having no A/E on site at Velindre is and will be terrifying for patients.

I am safer having my chemotherapy in Prince Charles hospital, knowing that if I have a bad reaction to any of my treatments, emergency care is there for me.

I will be needing continuing cancer care from Velindre in the coming years, and I don’t understand why my life and safety is worth less to [the] Welsh Government and Velindre than a vanity project which is not fit for purpose.

Without access to the best current research I and other patients will be excluded from potentially life extending treatments and trials. Research cannot take place without having on site access to A and E at the new Velindre site, so this excludes from opportunities available elsewhere in the UK.

This is such a backward step by all to pursue this outdated and unsafe model for the new Velindre site.

It was local campaigner Cat Lewis who applied for the judicial review. The court denied Lewis’s appeal application on 17 November having rejected the first request in September. Following the court’s decision, Cat Lewis had this to say:

to all of you who gave time , gifts and money,

to all of you who stood strong and said no,

to the wildlife now more in peril,

to the patients present and future who won’t get the best model of treatments,

for the patients who will die,

for the ministers and planners who know this is wrong in their hearts but don’t have the courage to say so.

The judge believes that even if presented with all the additional things we have found out and linked, all that the judicial review would clarify – that the senedd ministers would still have come to the same decision: that they need to build a short term fix to a space issue, as fast as possible.

and fuck the future.

Campaign group Save the Northern Meadows slammed the court’s decision saying it was:

a failure of the legal system to hold the Welsh Labour Government accountable for decisions which are not in the best interest of the public, the climate, or future generations.

The decision made today ensures the people of South East Wales will always receive worse cancer care than what is provided in England, and slapped with a higher economic, clinical, and personal cost for it. As children’s cancer services in London are held responsible for failing to colocate their centres, Wales is pushing forward with what we know is a highly dangerous and backwards model of care, that leaves patients receiving palliative care in the back of ambulances to die. We do not accept this future for us, our families, and our communities.

The decision shows how weak Welsh environmental law really is. It shows that politicians – regardless of the Environment (Wales) Act and the Wellbeing of Future Generations Act – will not be held accountable or responsible for environmental destruction, and do not have to consider sustainable development in all they do. Regardless of what Mark Drakeford told world leaders at COP26, the Welsh Labour Government is not a leader on climate. In fact, their policies amount to greenwashing, and the lacklustre language will spell tragedy for biodiversity across Cardiff and the whole of Wales.

We note that the judicial review has been refused and the previous judgement has been upheld.

We are committed to ensuring people affected by cancer in South East Wales have access to the care they need at a new cancer centre.

Velindre Cancer Centre was established over 65 years ago and all our staff play their part in treating, supporting and caring for over 5,000 new referrals and around 50,000 outpatients each year. Growth in demand for cancer services in Wales is expected to grow at approximately 2% per annum and by 2040 there will be 300,000 people in Wales living with cancer. The need for a new Velindre Cancer Centre to manage this increase and support cancer patients is more urgent than ever.

Alongside our colleagues in the University Health Boards across the region, we are implementing an ambitious programme of work to ensure that the services and care patients, their families and their carers receive across the whole of South East Wales are safe, provide the best possible patient experience and supports them all throughout their cancer treatment.

Co-location is the solution?

is a healthcare professional action-group fighting for the best cancer care in South East Wales. Its members are appalled that a new cancer centre for the region is actually planned to be ‘stand-alone’.

It published a November 2020 letter on its campaign site from the Wales Cancer Research Centre External Advisory Board that said:

Cancer units services which have had general services withdrawn from their campuses have been baldy disadvantaged, both for patient care and research. Although there are specialist cancer centres in England, they are large centres. Crucially, they have substantial medical and surgical support services on site. … In this regard Velindre is very much out of step with the prevailing thinking about patient care

It also coordinated a letter signed by 163 senior clinicians. It states that they:

agree that co-location with an acute hospital would provide safer acute in-patient care, improve support from other specialties, create a better base for research and be in line with best practice elsewhere.

strongly doubt this will deliver the best service for patients, and whether it is the best use of public funds.

The campaign goes on

Campaigners told The Canary they will “hold out” and added:

Patients and clinicians are angry, and are facing significant uncertainty for the future due to the serious, life threatening delays to the delivery of this poorly conceived and dangerous project. …

7 years on from the decision not to pursue the building of the new cancer centre on the grange site at Whitchurch Hospital, Velindre and the Welsh government continue to put the people of South East Wales at risk. As ambulances spend hours waiting outside A&E, we know there’s a human cost to the decade of delay by Velindre.

Featured image via – Save the Northern Meadows