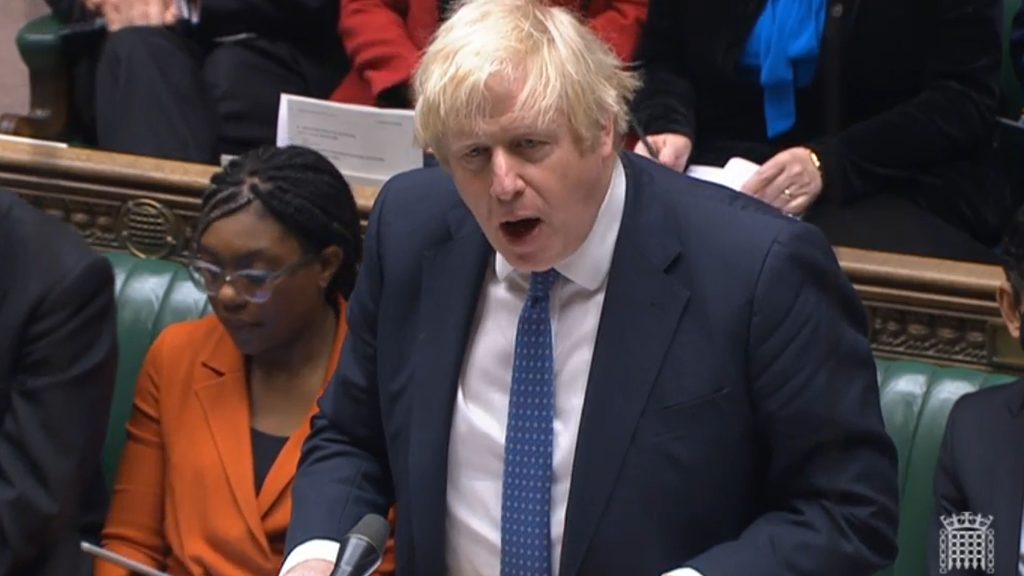 Boris Johnson defended his record in office as he faced questions about his leadership and political future. The Labour Party and others are accusing the prime minister of breaking several promises that he made in his 2019 manifesto. The SNP has described him as “simply unfit for office”.

🤥 HS2 to Leeds
🤥 6,000 more GPs
🤥 40 new hospitals
🤥 Northern Powerhouse Rail
🤥 No National Insurance rise
🤥 No change to the Pensions Triple Lock
🤥 No one will have to sell their home to pay for care

You can't trust a word this PM says.

“Is everything OK, Prime Minister?”

In a rowdy session of Prime Minister’s Questions, Johnson was cheered by Tory MPs as he rejected claims he was not fit for office. It comes in a week when Tory MPs have allegedly been saying that Johnson is no longer fit for his position.

As ever, the louder the cheers, the more trouble the prime minister is in. #pmqs

The PM’s appearance in the Chamber also followed criticism from within his party in a series of hostile briefings since a chaotic speech at the Confederation of British Industry on 22 November. Labour leader Keir Starmer highlighted Tory divisions over Johnson’s style and rumours of a rift with chancellor Rishi Sunak.

Looking at Tory MPs behind Boris Johnson and the Johnson honeymoon is most definitely over 😂. Given the no-confidence letters now flowing into the 1922 Committee – it’s less ‘Get Brexit done’ and more ‘Get Boris gone’ #PMQs

The chancellor sat next to Johnson in the Chamber as Starmer said:

The Prime Minister’s routine is falling flat. His Chancellor is worried that people are getting wise, his backbenchers say it’s embarrassing… and senior people in Downing Street tell the BBC ‘it’s just not working’.

Echoing the question asked by a journalist on 22 November, Starmer said:

Is everything OK, Prime Minister?

I’ll tell you what’s not working, it’s that line of attack.

The Labour leader accused Johnson of breaking a promise that no one would have to sell their home to pay for social care under his reforms for England, on top of a pledge he had already abandoned on not raising taxes. Starmer said:

Who knows if he will make it to the next election. But if he does, how does he expect anyone to take him and his promises seriously?

The Labour leader branded the social care cap a “working class dementia tax” because poorer families face losing proportionally more of their assets than wealthier ones. Johnson defended his record and attacked Labour, saying his social care plan “does more for working people up and down the country than Labour ever did”. He also claimed:

There are now more people in work than there were before the pandemic began, that’s because of the policies this Government has pursued.

There was more support for Johnson at Prime Minister’s Questions than there had been last week, although some gaps were still visible on the Tory benches. At one point, as Conservatives barracked Starmer, the Labour leader said:

I see they have turned up this week, prime minister.

Tory MP tells me the dep chief whip texted Tory MPs at about 12.10pm "pleading" for them to go to the Chamber to support Boris Johnson at PMQs

The SNP’s Westminster leader Ian Blackford said the prime minister “can’t even give a coherent speech to business” adding:

The PM avoided answering the question and instead asked Blackford “what on earth he is doing talking about party political issues” when the people of Scotland wanted to know about the “manifold failures” of the SNP government in Edinburgh.

📢  Boris Johnson is surrounded by a litany of broken promises and failure.

⚠️  And a Tory sleaze and corruption scandal on a scale not seen since the 90s.

🚨 Boris Johnson is simply unfit for office – even his own MPs are losing confidence in him. pic.twitter.com/TrBk1kWBc5

The Commons exchanges came after Cabinet minister Dominic Raab insisted the prime minister “is on great form” and dismissed “Westminster tittle tattle” about his position. Downing Street was forced to insist that the prime minister was physically “well” and “focused on delivering for the public” following questions about the CBI speech on 22 November which saw him lose his place in his notes, impersonate a car, and talk about a visit to Peppa Pig World.

This is bang on. But what does it say about British politics that the most successful Conservative politician in Britain since Thatcher was essentially a media confection? https://t.co/tZGpyjbMLy

Rumours have swirled about strained relations between Johnson’s No 10 and Sunak’s No 11 since a “senior Downing Street source” told the BBC “there is a lot of concern inside the building about the PM” and “it’s just not working”. Allies of Sunak denied the Treasury was involved in the briefing.

The anonymous source of the incendiary briefing to the BBC has been dubbed the “Chatty Pig” in Westminster, as the comments emerged following the prime minister’s CBI speech.

It’s the job of Westminster commentators to pick up on one anonymous source from wherever they found it to criticise the Government of the day, that’s fine.

The British media focusing more on Boris Johnson talking about a cartoon pig in his speech than say… his government voting through more NHS privatisation really says it all.

He said Johnson was “focused on the job at hand”, adding:

The Prime Minister is an ebullient, bouncy, optimistic, Tiggerish character and he livens up his speeches in a way that few politicians past and present have done, but actually there is a steeliness to him as a Prime Minister and indeed his team, and we work as a team.

Priti Patel, Kwasi Kwarteng, Dominic Raab & Liz Truss were co-authors of the “Britannia Unchained” manifesto. In it they attacked British workers as “the worst idlers in the world”. They want it to be easier for employers to sack workers.

Tories have zero respect for workers.

One Tory MP told the PA news agency that Johnson was “losing the confidence” of his backbenchers and should quit in the new year. The MP would not say whether they had submitted a letter to the 1922 Committee of Tory backbenchers calling for Johnson to quit. Meanwhile, the Telegraph quoted a Tory whip as saying it was an “assumption” that some MPs had sent no-confidence letters to the 1922 Committee.

– Broke the Tory manifesto pledge on social care
– Ripped up his promise to keep the pensions triple lock
– Broke his pledge on Northern Powerhouse Rail. #pmqs

If 15% of sitting Conservatives submit letters then there would be a vote on his leadership, although the whip said “it will not get anywhere near the 50 letters you would need, but it does cause angst”. Asked about the suggestion that letters had been sent to the 1922 Committee, Raab told LBC:

There is the usual Westminster tittle tattle and I’m not aware of that.

Bit embarrassing for the deputy PM to have to be trotted out to defend @BorisJohnson's increasingly erratic & chaotic behaviour. There is nothing 'ebullient' or 'Tiggerish' about our car-crash PM, @DominicRaab should stop insulting people's intelligence defending the indefensible