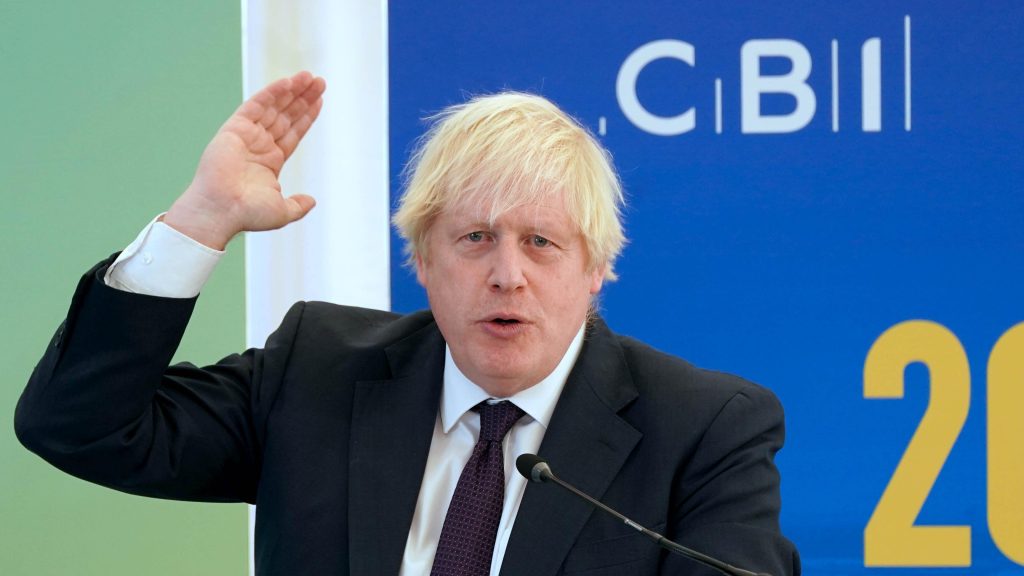 Boris Johnson faces pressure within the Tory party to re-establish his grip following a chaotic speech to business leaders and a revolt over social care.

It may surprise you but for the first time ever a Tory MP I know has told me that they’ve had enough of Boris Johnson & are actively looking to replace him
Of course, they won’t say it “on the record” because they don’t want to be the “first to jump”
But it’s ominous for the PM

Former PM contender Jeremy Hunt said it had “not been a great month” for the government, “not just on trivial issues like speeches going wrong but on much more serious issues like parliamentary standards”.

The prime minister’s address to the Confederation of British Industry (CBI) on 22 November saw him lose his place in his notes, talk about Peppa Pig, and impersonate a car. While the speech was arguably in line with how Johnson has always presented himself, it’s certainly the case that what’s been ‘business as usual’ for the prime minister is being viewed differently by the media.

The government also survived a rebellion over its social care reforms, with 19 Tories opposing the plans and dozens more not voting at all in response to the cap on costs being less generous than expected. Hunt, the Commons Health Committee chair, was one of the Tories who abstained over the social care reforms.

It followed a bruising few weeks which have seen Johnson’s judgment being questioned over his handling of the Owen Paterson row on parliamentary standards and Tory criticism of scaled-back plans for rail upgrades in the North.

How long before Johnson steps down to spend more time with his families?

Former Cabinet minister Hunt, who stood against Johnson for the Tory leadership in 2019, said the CBI speech “wasn’t a great moment and it hasn’t been a great month for the Government”.

In a sign of the questions being asked about Johnson, a senior Downing Street source told the BBC:

there is a lot of concern inside the building about the PM…. It’s just not working.

Cabinet needs to wake up and demand serious changes otherwise it’ll keep getting worse. If they don’t insist, he just won’t do anything about it

Johnson narrowly succeeded in getting MPs to back his new policy to cap care costs in England on the evening of Monday 22 November.

The government won the vote by 26, a major cut to the prime minister’s working majority of around 80 MPs. 19 Conservatives – including former Cabinet minister Esther McVey and ex-chief whip Mark Harper – rebelled to oppose the plans. 68 Tories did not vote for them, either because they abstained or could not attend.

I was conflicted, I actually ended up abstaining because it is a big disappointment that they changed the way the cap is calculated.

Tory majority drops from 80 to 26 on social care vote. Remarkable collapse in Tory vote & also demonstration of collapsing support in Johnson on Tory benches in Commons. Talk starting already of his replacement.

• If my constituents need social care they lose their homes to pay for it.

• If Boris Johnson’s donor pals need social care they keep their homes & we pay for their care.

Not including council support in calculating whether the cap on care costs has been reached means it “won’t protect the assets of as many people as we had hoped for”, he said.

BREAKING: Without sight of even an impact assessment on their constituents Tory MP’s have just voted for Boris Johnson’s Care Con – no one will have to sell their home to pay for social care unless they are poor and live in the north

Remember next time you vote

The scale of the revolt could encourage peers to seek to amend the legislation when it reaches the Lords. Crossbench peer baroness Finlay of Llandaff said an impact assessment of the reforms – which was not available to MPs – will be “very important”.

She told the BBC’s Today programme:

It may be that we will say to the Commons, ‘can you think again?’, it may be that we come up with constructive amendments to improve what is on the table at the moment because, clearly, there’s a lot of disquiet.

Despite the open and not-so-open rebellion in his party, some maintain that the PM is actually being very clever:

Artful bumbling slapdashery as a way of dominating the news and overshadowing the opposition, day by day. Quite an act. pic.twitter.com/uW060O6PJs