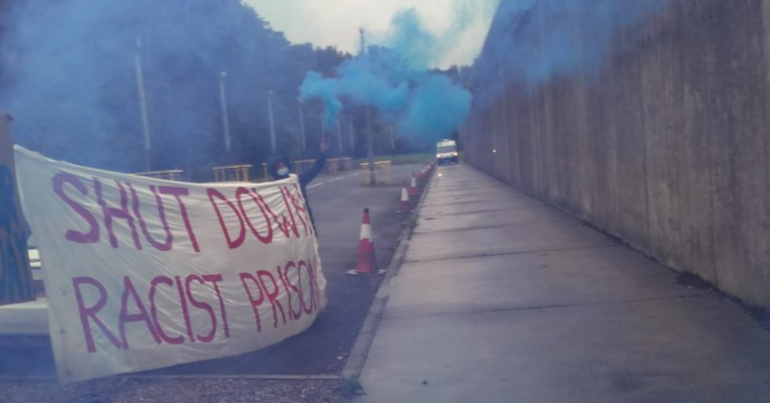 Campaigners have raised concerns about a Muslim prisoner, who they say is being punished for speaking out against racism by prison officers.

In September, The Canary reported that Miran Thakrar was given a “nicking” (a prison disciplinary procedure) at HMP Long Lartin after carrying out the Muslim call to prayer. Community Action on Prison Expansion wrote at the time:

Muslim prisoners were interrupted during the call to prayer by officers banging on the door saying they were enforcing noise pollution rules.

A non-Muslim officer told [a prisoner named] Miran, “you don’t have to do call to prayer, you only do that at the mosque”.

When Miran told the officer not to explain his religion to him, the Officer gave him a nicking [a prison disciplinary procedure] for threatening abusive language/ behaviour.

The Canary has seen several complaints made by Miran accusing officers at Long Lartin of racist behaviour.

‘Retribution’ for speaking out

Miran has since been moved to another prison – HMP Frankland – and placed in its Segregation Unit, which campaigners say is a punishment for speaking out against officers at Long Lartin.

Campaign group Anti-Carceral Solidarity says that Miran is in danger at HMP Frankland, because he has experienced racist abuse at the prison when he was there in the past.

According to Anti-Carceral Solidarity:

As retribution for resisting racism and Islamophobia in HMP Long Lartin, Miran Thakrar has been transferred to the segregation unit in Hmp Frankland.

This has directly put his life in danger.

Threats to Miran and his family have been made by both prisoners and staff at [HMP] Frankland.

When Miran was last located in HMP Frankland in 2010, he was abused in the segregation. Officers destroyed his food, starving him.

Officers not only allow racist abuse to continue on their watch but encourage it.

Campaigners are calling for people to write letters demanding that Miran is moved out of HMP Frankland immediately.

Miran is still being held in indefinite solitary confinement confinement at HMP Frankland.

Miran must be transferred to the wing in HMP Whitemoor immediately.https://t.co/KPXaZKWBQN

Anti-Carceral Solidarity claims that Miran is being held indefinitely in solitary confinement at Frankland, because the prison has assessed that it would not be safe for him to be held in the prison’s wing. According to the group:

Even the prison assessed he would be unsafe on the wing. He is therefore being kept in solitary confinement until he is transferred.

Miran is being tortured indefinitely as a result.

The Canary contacted the Ministry of Justice for comment but had not received a reply at the time of publication.

According to the Campaign to end Solitary Confinement:

Solitary confinement is routinely used in UK prisons to impose discipline across all categories of closed prison (A, B and C). Segregation is often used as a punishment and sometimes justified as a form of protection. Most prisons have a segregation unit. Regimes inside of segregation units are “characterised by social isolation and restricted sensory input”. They are designed to restrict a person’s interpersonal interactions. People imprisoned in a segregation unit occupy a single cell. These units have far fewer people imprisoned in them, and have more staff per person. People in a segregation unit have allocated ‘exercise’ time, if there are the staff available to facilitate this. A segregation unit can only unlock 1-2 people at one time. ‘Exercise’ is facilitated in small cages outside where you can walk around in a confined space on your own.

However, prisoners are routinely held in excess of 14 days. A 2021 Justice Inspectorates report found that “Prisoners were held in segregation for too long” at Long Lartin.

In 2016, an employee of HM Inspectorate of Prisons wrote this about Segregation Units in UK Prisons:

too often we found exercise yards that were cage-like or provided no view of the outside that was not filtered through fences or razor wire. Access to exercise, showers and phones was often inconsistent and in one instance only provided three times a week.

Segregation “used as a weapon against the vulnerable”

According to long term prisoner Kevan Thakrar – who is Miran’s brother:

[segregation] is used as a weapon against the vulnerable, marginalised and all too often the minorities.

Kevan calls for an end to prison segregation units and Close Supervision Centres (CSCs) – CSCs are the most severe form of isolation that exists in the UK prison system. He concluded:

With segregation being almost unheard of in the female prison estate it has been shown to not be required. A total abolition of the CSC solitary confinement and segregation units is the only way to end this insidious destruction of human minds and lives.