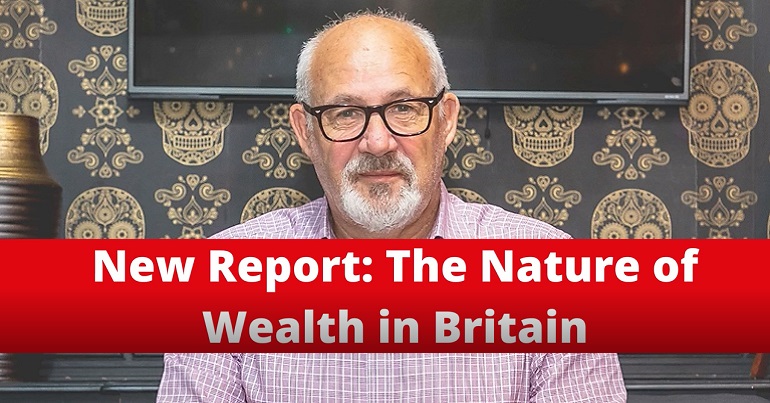 A major report by Labour MP Jon Trickett has called for a wealth tax as part of a major overhaul of the UK’s tax system. It estimates that if the richest paid more in tax, it could raise nearly half a trillion pounds across five years.

The report is called The Nature of Wealth in Britain. It looks at various measures of how wealth is distributed in the UK; how our current tax system affects the richest and poorest, and what could be done to make the system fairer. A press release said that the report’s launch:

comes ahead of the Chancellor’s Autumn Statement that looks set to propose cuts to public services after the Chancellor has asked departments to find “at least 5 percent of savings and efficiencies from their day-to-day budgets.

Trickett launched the report with a video:

As the report lays out, the situation is stark.

There are now more billionaires in the UK than at any other time in the 33-year history of the Times Rich List. And the richest 250 people have seen an increase of £106 billion in their wealth since before the pandemic.

Juxtapose this with the fact that over 11 million people have had their jobs furloughed, 14 million are living in poverty (9 million of whom are actually in work) and there has been a 33% increase in the use of food banks in the last 12 months.

To add to this, the Tory government is cutting Universal Credit, breaking an election promise by hiking up National Insurance and overseeing a huge jump in inflation.

Moreover, it notes that:

The richest people have seen their wealth increase, by £538 billion between the financial crash and just before the start of covid. Even under covid, the richest 250 increased their wealth by another £106.7 billion.

The report also shows just how weighted in favour of the rich the UK tax system is. It details how:

Meanwhile, it outlined how:

The report also detailed that:

The report also proposes a “hybrid wealth tax”. It says that this would include the second tax outlined above, plus a tax on wealth people made after this. It noted that:

Over Covid, the richest 250 people, as listed in the Sunday Times, increased their wealth by £106.7 billion. If we taxed wealth increases at the same base rate of income tax (20%) it would raise £21.3 billion each year.

The report says that:

Overall the report’s proposals could raise £490.9bn in five years.

Public support appears high for some sort of wealth tax. For example, as the report noted:

In May 2020 YouGov produced a poll which showed that 61% support a wealth tax for people with assets worth more than £750,000 (excluding pensions and main homes)… In October 2020 IPSOS MORI also polled people about a wealth tax, with 41% strongly supporting one.

But what could this fairer taxation pay for?

Where could half a trillion go?

The report noted that just under half a trillion in additional tax could pay for:

So, will it happen? Trickett thinks it must.

Trickett: a “cycle of inequality” that needs to be broken

Trickett said in a press release:

It is also necessary to address extreme wealth inequality. Our political system is rigged in favour of global corporations and the super-rich. Wealth is turned into political power through donations and lobbying. Political power is used to advance policies that financially benefit the elite at everyone else’s expense. It is a cycle of inequality that leads towards oligarchy and threatens our democracy.

Bringing taxes on wealth into line with those on income is both morally as well as fiscally correct. But it is also a bold policy which will appeal to both voters and the labour movement precisely because it has one of our core values, fairness, at its centre.

Now, it’s up to the political parties to act. The Labour leadership must read and adopt Trickett’s report. Then, its proposals should be tabled as an opposition day debate. Moreover, it should form the basis for Labour policy at the next election. Anything less is missing a golden opportunity to truly ‘level up’ the UK.

Featured image via the Office of Jon Trickett – screengrab