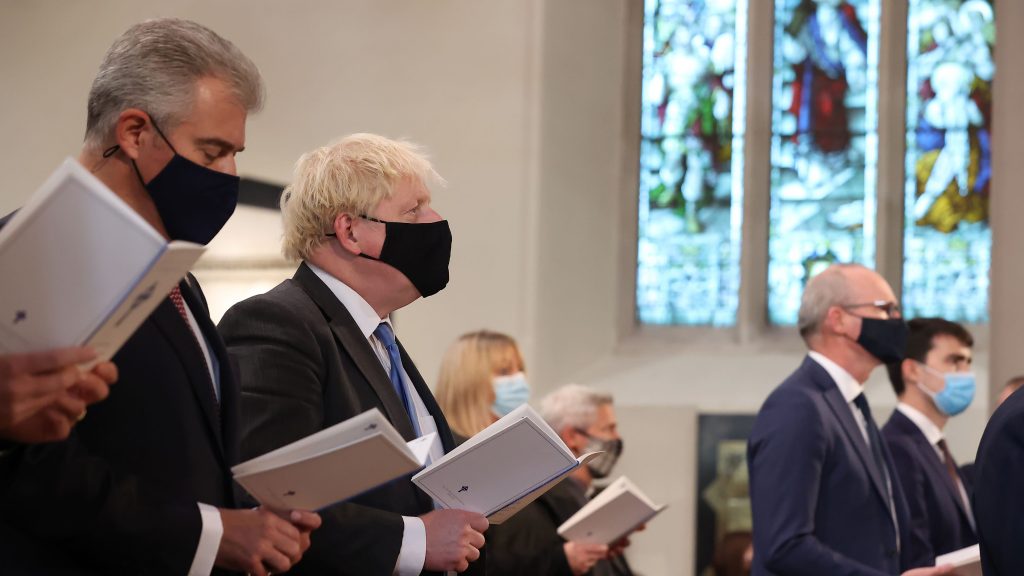 Prime minister Boris Johnson and Irish foreign affairs minister Simon Coveney were among dignitaries who attended a church service to mark the centenary of Northern Ireland’s formation. The prayer service at St Patrick’s church of Ireland Cathedral was organised by the four main churches to mark the formation and the division of Ireland in 1921.

The British state divided Ireland and created ‘Northern Ireland’ as a British colonial enclave after the Irish Republican Army’s guerilla war against British rule enabled the creation of the Irish Free State in the rest of Ireland. The events of 1921 came in the wake of the British state’s brutal suppression of Dublin’s 1916 Easter Rising. The division of Ireland has led to a century of conflict.

The Irish government was represented by Coveney and chief whip, Jack Chambers. Irish republican party Sinn Féin did not send a representative. The queen was also due to attend but it was reported she had to cancel due to ill health.

The service became the centre of a row last month after the president of Ireland, Michael D Higgins, declined an invitation to attend because he believed it was not politically neutral. As The Canary‘s Peadar O’Cearnaigh wrote at that time:

…the Irish president Michael D Higgins declined an invitation to attend a political event in the north of Ireland ‘celebrating’ 100 years of partition on the island. Both historians and constitutional experts found he was correct to have rejected the invitation. Several online polls would appear to show an overwhelming majority of Irish people support his decision not to attend. And from the conversations I’ve had since this controversy broke, absolutely no one seems to be screaming for Higgins to change his mind.