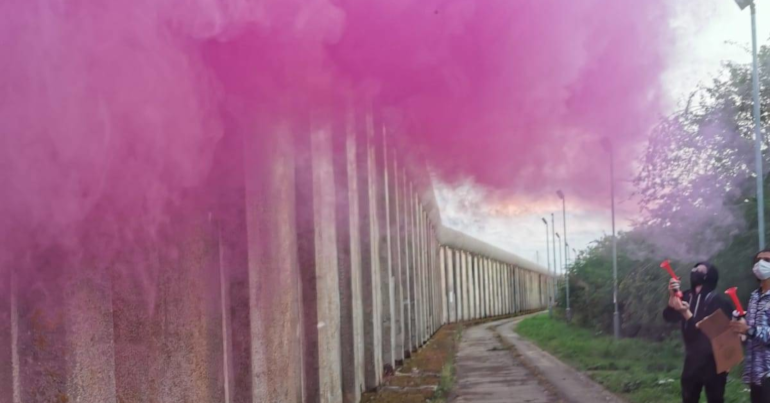 Racist and Islamophobic violence against prisoners is common, but one prisoner at HMP Long Lartin told Community Action on Prison Expansion (CAPE):

the screws [prison officers] have upped their racism towards Muslims because of what is going on in Afghanistan. Some of them served there.

The call to prayer has effectively been banned with officers citing noise pollution as a reason.

Muslims who speak up are being locked in the segregation unit.

Muslim prisoners were interrupted during the call to prayer by officers banging on the door saying they were enforcing noise pollution rules.

A non-Muslim officer told [a prisoner named] Miran, “you don’t have to do call to prayer, you only do that at the mosque”.

When Miran told the officer not to explain his religion to him, the Officer gave him a nicking [a prison disciplinary procedure] for threatening abusive language/ behaviour.

CAPE also said that “officers are using their power to harm prisoners who are practicing Muslims” at another prison, HMP Wakefield. According to a statement by the group:

One man is on 7 man unlock. This means 7 officers with shields enter each time his cell is opened and he is required to stand at the back of his cell in a certain position, or be attacked by 7 armed officers.

Others are being denied the most basic necessities. Someone has been denied hot water and blankets, and hasn’t been allowed to leave his cell to use the shower or exercise. He has not been seen outside his cell for a month.

Someone else was refused his right to a shower and exercise because there was a female officer on the wing. However other prisoners reported there were in fact 6 male officers on the wing

When officers are challenged they retaliate with nickings [allegations of breaking prison rules]. One person’s access to his money has been cut off – the only way he is able to purchase edible food and phone credit to maintain contact with his support network.

All of these prisoners are practicing Muslims.

Prisoner complains of being treated like “a monkey and a slave”

CAPE say that they have received an email from the governor of HMP Wakefied denying the allegations of Islamophobia at the prison and claiming that “the prisoners here are being treated with dignity and respect”.

But CAPE reports that since the governor’s denial of its allegations, a Muslim prisoner named Michael Peters has been “rushed” by a group of officers in the prison after asking “why he was being treated like he was a monkey and a slave”.

Retaliation for those that speak out

The reports from CAPE paint a picture which shows that those who speak out against the racialised violence of the prison system face violent retaliation.

The Canary has previously reported that a Muslim prisoner named Kevan Thakrar was placed in the Segregation Unit at HMP Full Sutton earlier this year after he spoke out against the prison authorities.

Similarly, Kevan’s brother Miran was reportedly placed in HMP Long Lartin’s Segregation Unit as a punishment for protesting against the prison officers allegedly preventing Muslims from conducting a call to prayer.

Earlier this year, The Canary reported that a police complaint had been made after Dwayne Fulgence – another Muslim prisoner – was left bleeding on the floor of his cell after an alleged attack by officers. Since then Dwayne has been moved to HMP Wakefield, but authorities have denied him access to his possessions. According to one campaigner:

Dwayne has been denied his property since he’s been in Wakefield, for at at least 6 weeks. He can’t see because his glasses are broken and the prescription is in his property. His incoming and outgoing mail is being withheld and his apps to get people onto his visitors list are just being ignored. They are really trying to isolate him.

Campaigners claim that the treatment of both Dwayne and Kevan is in retaliation for speaking out against racist attacks on prisoners. CAPE says that Dwayne’s treatment amounts to “psychological torture” after he stood “up to racist physical abuse from officers”.

The Canary asked the Ministry of Justice’s press office for a comment on the allegations referred to in this article. A Prison Service spokesperson said:

“All claims are investigated. We have a zero tolerance for discrimination in our prisons and will not hesitate to take action where necessary.”

A pattern of racism and abuse

However, Muslim prisoners are subjected to systemic violence within the prison system. Just this year, The Canary has reported several alleged racist attacks on Muslim prisoners – coupled with the mistreatment and abuse of another – at HMP Full Sutton and Long Lartin. CAPE allege that one individual prison officer has carried out three attacks on Black prisoners who are practising Muslims at HMP Long Lartin over the past nine months.

“we are watching and we will not remain silent”

Campaigners have pledged not to remain silent against the alleged racist violence taking place behind prison walls. According to CAPE:

Prison Officers think they can get away with this treatment because they are far away from accountability, behind the prison walls.

We must let them know we are watching and we will not remain silent.

They can not continue to torture people with impunity.

We say: No Justice, no peace.

Featured image via CAPE (with permission)