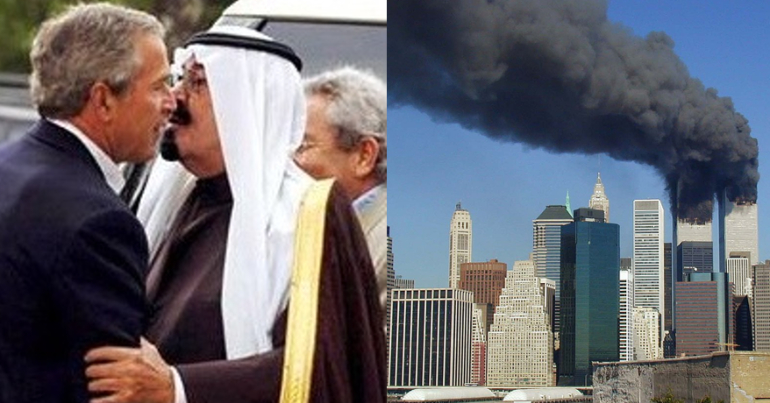 US president Joe Biden recently announced that he will sign an executive order to facilitate the release of classified documents about the 9/11 terrorist attacks. The move is the result of a long-running campaign by victims’ families to determine whether the government of Saudi Arabia played a hand in the atrocities.

Throughout the 20 years since the attacks, it appears that successive US administrations and the US intelligence community alike have gone out of their way to suppress evidence that might implicate one of Washington’s staunchest allies. This refusal to release the documents speaks volumes about the US’s fawning treatment of one of the world’s last remaining absolute monarchies. It also raises big questions about the US’s flagrant double standards in the Middle East during its so-called ‘War on Terror’.

Documents finally declassified after three presidents in a row refuse

On 3 September, Biden ordered the US Justice Department to release documents produced as part of a Federal Bureau of Investigations (FBI) probe into the 9/11 attacks. Groups representing families of 9/11 victims have lobbied hard for years for their release. In response, Biden committed to declassifying the documents during his 2020 presidential campaign.

As the anniversary of the attacks approached, these groups released a statement urging Biden not to attend memorial events unless his administration declassified the documents. The administrations of former presidents George W. Bush, Barack Obama, and Donald Trump all refused to do so.

Many victims’ families have been particularly motivated by a suspicion that the government of Saudi Arabia might have been involved in planning the attacks. On 3 September, Reuters reported:

Family members of victims of the Sept. 11 attacks asked a U.S. government watchdog on Thursday to investigate their suspicions that the FBI lied about or destroyed evidence linking Saudi Arabia to the hijackers.

These suspicions have been heightened by the fact that Saudi Arabia is, after Israel, the US’s second staunchest ally in the Middle East. Throughout the presidencies of Donald Trump, Barack Obama, and George W. Bush, Washington entered into profitable arms deals with the country’s royal family. Successive US administrations, therefore, have had an incentive to suppress information that could reveal Saudi involvement in 9/11. Politico reported in April 2017 that the 9/11 Commission’s “own members protested drastic, last-minute edits that seemed to absolve the Saudi government of any responsibility”.

Bogus justification for meddling in the Middle East

But the reality is that Washington’s deceitfulness runs even deeper. Because the 9/11 attacks were used as a ruse to provide bogus justification for the invasions of Afghanistan and Iraq to topple the Taliban and the Ba’athist government of Saddam Hussein respectively. Yet there is evidently significantly less reason to believe that either of these actors had any connection to 9/11 when compared with Saudi Arabia.

In spite of this rather obvious reality, there were no calls in the aftermath of 9/11 to take any kind of action whatsoever against Saudi Arabia, let alone to invade it and replace its government. Yet despite much thinner evidence linking them to the attacks, the Bush administration instead launched invasions of Afghanistan and Iraq. What could explain this stunning paradox?

The answer lies in examining the criteria on which the US bases its treatment of other countries. As The Canary has extensively argued, US administrations of both parties do not base their treatment of other countries on their publicly-stated criteria of human rights and democracy. (Indeed, if the true motivation behind Washington’s foreign policy was to spread democracy, as George W. Bush claimed, then Saudi Arabia would probably top the list of countries to invade given its status as one of the world’s last remaining absolute monarchies.) Rather, Washington bases its stance towards other nations according to how obedient they are to US geo-strategic and economic interests.

When it comes to Saudi Arabia, the evidence speaks for itself. In the final year of World War II, the US entered into a deal with the Saudi royal family to ensure continued privileged access to the country’s ample oil reserves. Ever since, the Saudi royals have been rewarded for this with the most fawning treatment imaginable. As then-US president Donald Trump put it in a November 2018 statement:

Opening up the region to Western oil companies in Afghanistan…

When it comes to Afghanistan and Iraq, on the other hand, the Taliban and the government of Saddam Hussein had fallen afoul of the US foreign policy establishment due to their growing unwillingness to serve US interests. This was particularly so in terms of providing favorable access to their countries’ oil reserves. And that resulted in a desperate scramble by the Bush administration to somehow tie them to 9/11.

In the case of Afghanistan, Washington attempted to strike a deal with the Taliban in the late-1990s to allow the US-based petroleum giant Unocal to build an oil pipeline through the country to the Caspian Sea. When it became clear that the Taliban was unlikely to accommodate this process, Unocal withdrew from negotiations and the plans were shelved. When 9/11 came along, it gave the Bush administration its perfect ruse to topple the Taliban in order to install a more friendly government that would allow the building of the pipeline. (Though there were considerable delays, probably owing to the chaos caused by the US invasion, construction of the pipeline finally began in February 2018. The New York Times reported at the time: “The United States has supported pipelines to bypass Russia and alleviate former Soviet states’ economic dependence on it.”)

Since this motivation would have surely provoked widespread scorn, Washington weaponized 9/11 by issuing allegations that the Taliban were ‘harboring terrorists’ and had links to al-Qaeda to whip up public and congressional support for invasion. On both counts, these allegations were dubious. A 2011 report by the Center on International Cooperation describes the relationship between al-Qaeda and the Taliban as “complicated and often tense”, adding that they “knew little about each other”. Nonetheless, the ploy seemingly paid off: only one congress member voted against the invasion while public opinion polls at the time put support for it at around 80%.

A similar, and even more duplicitous, dynamic played out with respect to Iraq. Saddam Hussein had been a close US ally, and even received US military funding in the 1980s. But throughout the 1990s, the relationship began to sour over his invasion of Kuwait. In the early 2000s, Hussein’s status as a US enemy was cemented when he fully nationalised Iraq’s oil industry and closed off access to Western petroleum companies. Unfortunately for the Bush administration, however, his connection to 9/11 was simply nonexistent – even Bush himself said after the invasion “I don’t think we ever said — at least I know I didn’t say that there was a direct connection between September the 11th and Saddam Hussein”.

So his administration concocted a narrative, which the media dutifully repeated, that would nonetheless play on public fears that had been ignited by the attacks. It fabricated bogus claims that Hussein’s government had been developing ‘weapons of mass destruction’ to provide a ruse for invading the country. (To demonstrate the absurdity of denouncing Iraq for purportedly having ‘weapons of mass’ destruction, consider that the only nuclear armed state in the entire region is the US’s number one ally, Israel.) As was the case with Afghanistan, the true purpose of the invasion was to create a more favorable environment for US oil companies. Even members of the US’s own military have admitted this reality. Former head of U.S. Central Command and Military Operations in Iraq gen. John Abizaid said in 2007: “Of course it’s about oil; we can’t really deny that”.

Some of the Bush administration’s leading figures, meanwhile, had extensive ties to the very corporations that ultimately benefited from the invasion, such as the former CEO of oil giant Halliburton, Dick Cheney, who served as Bush’s vice president. The wars in Iraq and Afghanistan were highly profitable for such US private contractors, which received billions in contracts for both wars. Halliburton itself ultimately became the largest single US government contractor in Iraq and by 2013 had received over $39bn in contracts.

The final piece of evidence could be coming soon

Clearly, the US foreign policy and intelligence establishment have a vested interest in suppressing evidence of potential Saudi involvement in the 9/11 attacks. After all, this would make even further nonsense of the entire edifice of bogus justification that the Bush administration built in order to manufacture consent for invading Iraq and Afghanistan.

Though his administration is hardly a decisive break from the bipartisan consensus for endless war, Biden’s decision to declassify the documents should nonetheless be welcomed. It might end up providing the final piece of evidence needed to determine whether one of the US’s own allies in the Middle East played a hand in the worst domestic terrorist atrocity in US history.