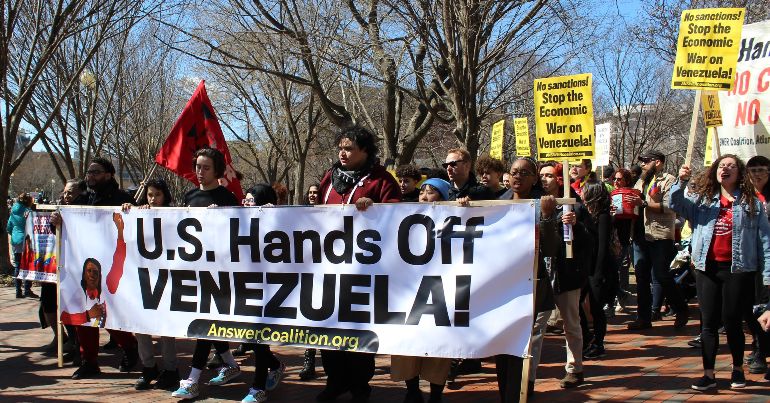 Ever since the Trump administration launched a coup attempt against the democratically-elected government of Venezuela in January 2019, the country’s civilian population has been suffering under a brutal sanctions regime. Amidst the coronavirus outbreak, Venezuelans are now at even greater risk given that the government is hamstrung by what has essentially morphed into a full-blown economic blockade.

But having so far failed in its ‘regime change’ effort, the Trump administration has now stooped to a new low by cynically using the global public health crisis as a weapon to oust president Nicolás Maduro.

An offer signed in the blood of Venezuelan civilians

On 31 March, reports emerged that the US is offering to lift the sanctions against Venezuela if its government agrees to hand over power to a “transitional council” that would govern the country until fresh elections are held. In other words, Washington is signalling that Venezuela can either have the government that it favors or continue to suffer from crippling shortages of food, medicines, and other crucial supplies. These shortages have already proven deadly; according to one 2019 report, US sanctions had led to the deaths of around 40,000 people before the coup attempt even began.

Now it appears that the Trump administration is cynically capitalizing on the further suffering caused by the coronavirus outbreak to intensify its coup attempt. And its key regime change personnel aren’t making any secret of this, either. On 31 March, the Guardian reported that US attorney general William Barr said: “It’s good timing, actually… The people in Venezuela are suffering”.

The administration is taking a kind of ‘kick them while they’re down’ approach, seemingly with the hope that by piling on sanctions and other actions, the administration can capitalize on the virus in Iran and Venezuela to spur greater public opposition to the incumbent governments and perhaps regime change.

A long and familiar history

This kind of brutal coercion is nothing new – in fact, it has a long history as one of Washington’s favorite foreign policy ploys. The economic blockade against Cuba, for instance, has led to over $100bn in lost economic output. Although its proponents publicly claim that the blockade is based on human rights concerns, it is, when the US’ record is examined, a highly dubious assertion. Rather, it’s an attempt by Washington to starve the Cuban population into submission in order to then impose its will on the island once the ‘regime’ has collapsed due to popular discontent.

Of course, this strategy has (so far at least) not succeeded in toppling the Cuban government. But aside from failing even on its own narrow terms, Washington’s coercive ‘regime change’ strategy is completely hypocritical when you consider the treatment it gives to friendly governments throughout the region, which often have much worse records on human rights and democracy.

The Trump administration, for example, bases its hostility toward Venezuela on allegations of a breakdown in democracy and human rights. Yet when the last election in Honduras was declared fraudulent even by the pro-Washington Organization of American States, it accepted the result without question. And in spite of Honduras’s terrible human rights record, Washington has generously funded its state security forces, which routinely commit crimes including extrajudicial killings.

The reason for this flagrant lack of even-handedness is that Washington doesn’t base its stance toward other countries on human rights or democratic credentials. Rather, its stance is predicated on whether or not each country’s current government serves its economic and geostrategic interests. The language of human rights and democracy are then cynically hijacked as post hoc explanations to provide justification for its bellicose stance.

As for countries that do serve its interests, like Honduras, which has kept the US ‘Soto Cano’ military base open, there’s practically nothing that Washington won’t overlook. And as if that weren’t enough to demolish Washington’s credibility, one still has to consider the fact that the US has intervened in scores of elections for decades in order to improve the chances of its favored candidate.

Truly a new low – even by Washington’s own standards

Clearly, Washington has neither scruples nor the remotest sense of even-handedness when it comes to advancing its own self-interest around the globe. But surely this latest move against Venezuela truly represents a new low. Washington is literally exploiting a global pandemic as the latest weapon in its regime change arsenal. And it doesn’t get much lower than that.