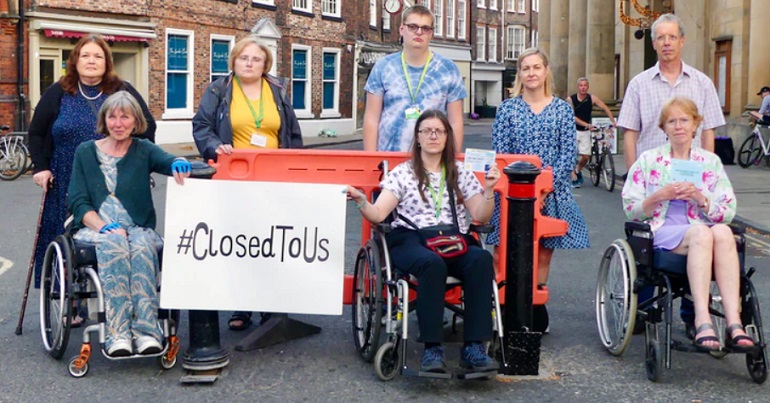 York council has caused anger, upset, and uproar over its decision to ban sick and disabled people from parking in the city centre. The council claims it’s due to anti-terrorism measures. A campaign group, meanwhile, has branded the move a threat to people’s “human rights, independence and dignity”.

During the coronavirus (Covid-19) pandemic in summer 2020, York city council stopped people parking and driving into the area around York Minister. The ban included sick and disabled people with Blue Badges, and it was due to social distancing needs. It was in an area called the “footstreets” – York’s pedestrianised part. Now, the council has voted to make the ban public. This time, the reason is terrorism.

It’s not so much if a terrorist attack happens but when. It is reasonably foreseeable to see someone coming to York, if there wasn’t any hostile vehicle mitigation, at something like the Christmas market and driving that vehicle to kill as many people as possible.

The Lib Dem and Green Party-run council obviously listened to voices such as Khan’s. Because on 18 November, it voted to keep the vehicle ban in place.

Exec voted to make the blue badge exclusion 10.30 to 5 permanent, to extend that till 7pm till September 2022, and in the meantime start consultation around making the 5-7 exclusion permanent as well.

What I take from this is, York is not welcoming for disabled people.

The council’s decision will impact around 7,500 sick and disabled people in York who have Blue Badges. As York Press wrote, the Labour Party objected. Its MP for York Central Rachael Maskell tweeted she was “sickened” by the decision:

I'm honestly sickened that Councillors running @CityofYork voted to exclude Blue Badge holders (disabled residents) from the city centre without first putting in place full mitigation. Well done @YorkLabour for opposing. There is one word for it – discrimination. #NotInMyName

The council, as York Press noted:

voted to put in place a series of mitigation measures, including dropped kerbs, the employment of an access officer and a feasibility study into an accessible shuttle service.

A spokesperson told the Guardian:

The council has a duty to protect the lives of residents and visitors, but we know that doing so as effectively as the police advise will have a significant impact on some blue badge holders.

A disabled Liberal Democrat described themselves as being “distraught”.

Amy Fortnam said on Twitter she had quit the Lib Dems over the move:

Absolutely distraught – emailed every @yorklibdems and @YorkGreens councillor imploring them not to go through with this. Have decided to resign my @LibDems membership. After six years of activism, speeches and campaigning. Disabled people are not collateral damage.

Another user pointed out that York council was effectively stopping sick and disabled people going where non-disabled people can go. And some Green Party members were angry with the decision too.

The council reportedly also ignored a report by a human rights advisor saying that the plan “risked being significantly discriminatory”. So, as York Disability Rights Forum tweeted, it’s not like the council didn’t know the impact its decision would have on sick and disabled people:

Last night, @yorklibdems and @YorkGreens watched me beg, plea and literally cry as I implored them to consider me as human, as someone they want in their city centre.

They voted to keep me, and people like me, out.

Another group, York Accessibility Action, said there’s “no suitable parking” for sick and disabled people within 150 metres of the city centre. So the group is planning legal action against the council.

Its crowdfunder has already raised over £5,000. York Accessibility Action said:

All attempts at communication and constructive consultation with the Council have met with no positive outcome and have failed to provide practical and meaningful alternatives to the ability to park close enough to the city centre.

We believe the City of York Council is disregarding the Equality Act 2010 and the human rights of disabled residents and visitors.

You can get involved online using #ClosedToUs.