Prince Andrew's been stripped of his military titles. But maybe the military is the right place for him. - Canary 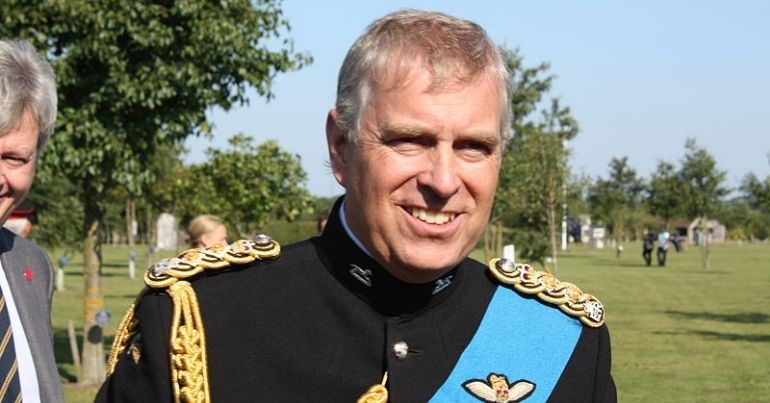 If I was to say prince Andrew Windsor is something of an oddity, you’d probably look at his family and say “so… like the rest of them then?”. And you wouldn’t exactly be wrong. But what I mean specifically is that unlike most of his military-cosplaying family, he actually did serve in a conflict. In his case, it was the Falklands/Malvinas War as a helicopter pilot.

It was there, he told the BBC (during a now infamous interview meant to offset the impact of abuse allegations), that he suffered an overload of adrenalin which left him allegedly unable to sweat. That unusual claim has since been challenged by his accuser, Virginia Giuffre. Giuffre claims to have been sex trafficked by the now-convicted Ghislaine Maxwell at the direction of the late paedophile Jeffrey Epstein. She claims she was subsequently sexually abused by the prince – charges he denies.

The latest turn in Windsor’s ongoing scandal of alleged sexual abuse shows something important. That is, like the monarchy, we place the military on a pedestal it does not deserve. As if it’s an institution which represents the very highest moral standards.

It must have stung the duke to lose his titles by order of the queen this week. The duke’s ‘His Royal Highness’ (HRH) title was also rescinded. As a result, he was told he would have to face the coming civil action as a private citizen.

The move followed an open letter to the queen from a group of 150 ex-military members. It asked that the prince be removed from the various honorary military roles he had occupied. So, no more LARPing as a colonel in the Grenadier Guards for Windsor.

Other roles removed include, according to the Guardian:

150 former military personnel published their open letter on 13 January. The letter was formulated with the anti-monarchist campaign group Republic. In it, the veterans say Windsor’s position was “untenable”:

We are therefore asking that you take immediate steps to strip Prince Andrew of all his military ranks and titles and, if necessary, that he be dishonourably discharged.

It is clear for all to see that Prince Andrew has been proven unfit to wear the uniform of any of Britain’s armed forces. That he is able to continue in numerous roles within the military is a disgrace, and an insult to those who continue to serve with distinction.

But there’s a problem with these claims. And it isn’t just that it shows how limited and centrist republicanism is in this country. More importantly, there’s no basis whatsoever for the suggestion that the military is adverse to a culture of misogyny, rape, or sexual abuse. If current reports are anything to go by, these issues are endemic.

In 2021, a landmark parliamentary report showed that two-thirds of women service personnel had faced sexual harassment or abuse. As the Guardian had reported, it:

…features evidence of gang rape, sex for career advancement and trophies to ‘bag the woman’

This was the real face of military culture around women.

MP, veteran, and subcommittee chair for women in the armed forces Sarah Atherton said at the time:

The stories we heard paint a difficult picture for women. A woman raped in the military often has to live and work with the accused perpetrator, with fears that speaking out would damage her career.

We heard accusations of senior officers sweeping complaints under the rug to protect their own reputations and careers. While many commanding officers want to do the right thing, it is clear that, too often, female service personnel are being let down by the chain of command.

In October 2021, the Child Rights International Network published figures on sexual violence against young women and girls in the military. These showed a spike in such offences in recent years.

Then in December 2021, measures were proposed as amendments to the Armed Forces Bill 2021. The aim was to make the military a safer place for women. But in the end, key proposals were voted down. And Atherton, who rebelled in the final Commons vote, resigned from her government role.

There’s a problem in the way we look at our major institutions in this country. The truth? Well, neither the monarchy nor the military set a moral example for us. And the notion that the military is too upstanding to have an accused abuser associated with it is wrong. Ultimately, this kind of poorly thought out claim does a disservice to us all.