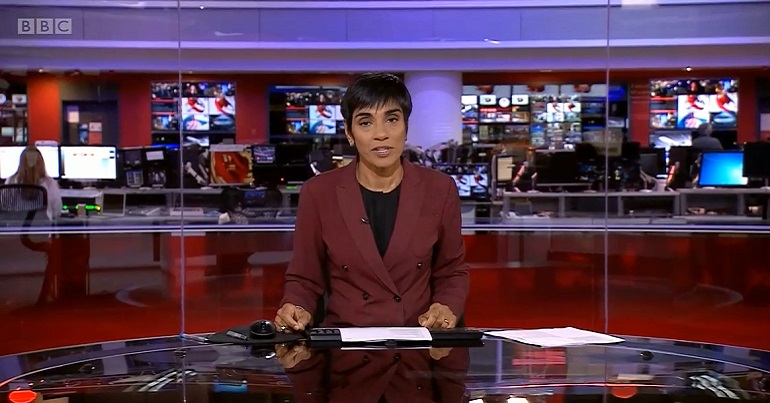 BBC News managed to protect the Tory government, MI5, and the Royal Family on Thursday 13 January. Because it provided cover for them all. And it also showed that it’s as much a threat to our democracy as Boris Johnson is.

Three stories dominated the headlines on 13 January. These were:

The UK is a supposed democracy. So, you’d think the BBC would make the ongoing scandal involving an elected prime minister its most important story; even more so when lawyers have threatened the Met with legal action over its stance. But if you’re News at Ten, then that wasn’t the case.

BBC News: getting its priorities wrong?

Its show on 13 January decided to run the stories in the following order:

What’s the problem with this? Well, it’s a case of a thinly-veiled form of bias:

A useful exercise on @BBCNews #BBCnews tonight for my @TheCanaryUK #CanaryAmplify trainees: media bias by story placement. BBC editors chose to place the #DowningStreetParty story third on the news roster, behind Andrew/MI5 – when it's arguably the most important story of the day pic.twitter.com/Cw4HP0RQ2a

Bias by Placement is the pattern of placing news stories in a way that downplays information supportive of the minority viewpoint. It is the news that editors and producers consider most important… As a general rule, story placement is a measure of how important the editor considers the story. In order to measure bias by placement you can observe where a newspaper places political stories and which political party is placed on the front page, with a big picture, as well as asking yourself who the articles tend to make look bad. Bias by placement can occur with newspapers, television, and radio news.

In the context of BBC News, bias by placement is what its editors choose to feature as the top story, and then in what order to put the others in.

It was a similar story on the BBC News app. As one Twitter user noted:

Currently no. 2 in the BBC news app for top stories. (Don’t know whether that’s on page clicks or their own set “top stories”.) They wrote an analysis piece on Prince Andrew and just a news piece on Johnson. (1) pic.twitter.com/Wn44EYduPj

Moreover, at the start of News at Ten, the BBC did not even include the government parties story in its headlines round-up:

Other forms of BBC bias

Of course, BBC News‘s bias by placement is on top of how it framed the three stories, too. For example, the BBC‘s royal reporter Nick Witchell presented the Windsor story with a large dollop of “flawed logic” bias about the queen. Witchell said of the Windsor situation that:

Considering the accusations against Windsor first came to light in December 2014, the queen taking over seven years to strip him of his titles is hardly ‘acting quickly’.

Then, the MI5/Chinese Communist Party story was equally biased. This time, it was bias by omission. Because BBC News chose not to mention that foreign powers interfering in UK politics is hardly uncommon. As the Morning Star reported, Russia, Israel, Saudi Arabia and the United Arab Emirates have all used various means to do this. This additional context from BBC News would have allowed the viewer to make a balanced judgement on the severity of MI5’s claims.

BBC editorial guidelines state that it:

is committed to achieving due impartiality in all its output. This commitment is fundamental to our reputation, our values and the trust of audiences.

But in reality, any sense of balance or even critique of the government and the establishment is firmly beyond the BBC‘s remit. As The Canary has documented, it’s always served as an arm of the state. As I wrote:

The BBC always has been, and always will be… part of the establishment “ecosystem” in the UK, and globally. This makes it the most noxious of media outlets.

the biggest problem is that the BBC is still the most used news source in the UK. Overall, it has dominance and therefore is actually more dangerous than the Sun and the Daily Mail. People still believe that it’s a bastion of impartiality. They believe what they’re reading and watching is accurate, and a fair reflection of the situation.

13 January’s News at Ten did little to show otherwise. And that’s why the BBC, much like Johnson, is such a threat to democracy in the UK.