While Boris Johnson's under fire, Scottish independence could make headway - The Canary 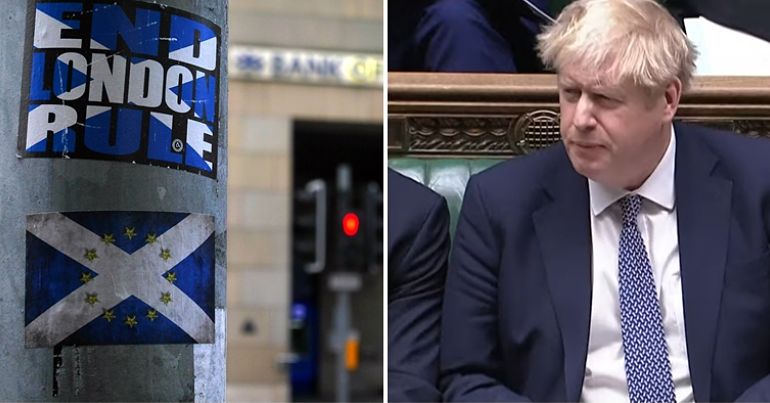 Scandalous as the partygate revelations hitting Boris Johnson’s government are, they shouldn’t distract from the accusations of “dodgy” and “illegal” acts in which it’s up to its neck. Nor should they distract from Tory attacks on our health service and civil liberties.

But more importantly, this scandal shouldn’t hide that the Tories haven’t completed their destruction of all that’s good. And there’s still time to stop them. In fact, these scandals might just have given the fight back the shot in the arm it needed. An opportunity for change, if you will.

ONE WEEK TODAY we march for independence through the streets of Glasgow. Join us! #AUOBGlasgow ✊🏼🏴󠁧󠁢󠁳󠁣󠁴󠁿 pic.twitter.com/mGHD2nY7yu

While the movement for Scottish independence has been growing for some time, recent Tory scandals from partygate to PPE – in addition to Johnson’s disastrous handling of the pandemic – have given it even greater impetus:

This says it all about the @ConserativesUK @BorisJohnson
Partying whilst the bodies were piling high#ScottishIndependence https://t.co/FL76PykthA

Author Edwin Hayward, albeit tongue in cheek, also sees it as an opportunity for Scottish Tories. They could finally use Scottish independence to get rid of Johnson as their leader:

Perhaps the Scottish Tories could rid themselves of Boris Johnson by backing Scottish independence. 😂

Some independence supporters feel the current scandal highlights that it’s more to do with a corrupt system than one man:

Why is everyone wanting @BorisJohnson to resign over Covid parties? This is bigger than 1 man. This culture is apparent throughout Westminster! It’s time for #ScottishIndependence #indyref2 #ToryDictatorship 👇🏻🇪🇺🏴󠁧󠁢󠁳󠁣󠁴󠁿 pic.twitter.com/4oDDFH82sf

And, separate to Scottish independence, actor and writer David Schneider highlight other Tory scandals going on at the same time:

While we were looking at #PartyGate

While there are those who may believe it’s better – for the sake of independence – to leave Johnson in power, AUOB feels that risk is too great:

5/ This emergency march for independence has the slogans 'Sack Johnson, End Tory Rule, Independence Now', because we have a corrupt individual, a corrupt Westminster system and the solution of independence available to us as soon as we exercise the right to self-determination.

This present moment could be a real opportunity

The simple act of removing Johnson won’t deliver Scottish independence. Nor will it, by itself, reverse the damage done to people’s lives or livelihoods by years of Tory policy. In fact, it will only result in Johnson being replaced by “another rotten Tory”. But if the Scottish independence movement sees the culmination of Tory scandals as an opportunity to take to the streets, then surely other movements will too. And they could then build on their existing street campaigns.

The attacks on what we value most are so serious that we could be living with their consequences for some time. But there is real hope. Because, large as the Tory majority is, the Tory leadership didn’t have loyalty in its ranks even before the partygate scandal got as big as it has. So, whoever takes over from Johnson could find themselves in a tricky position if public anger against Tory rule becomes widespread.

It’s no surprise to anyone that the Tories are corrupt. Nor is it any surprise that Starmer’s Labour doesn’t offer a real alternative. The Scottish independence movement sees this, and the time to act is now.