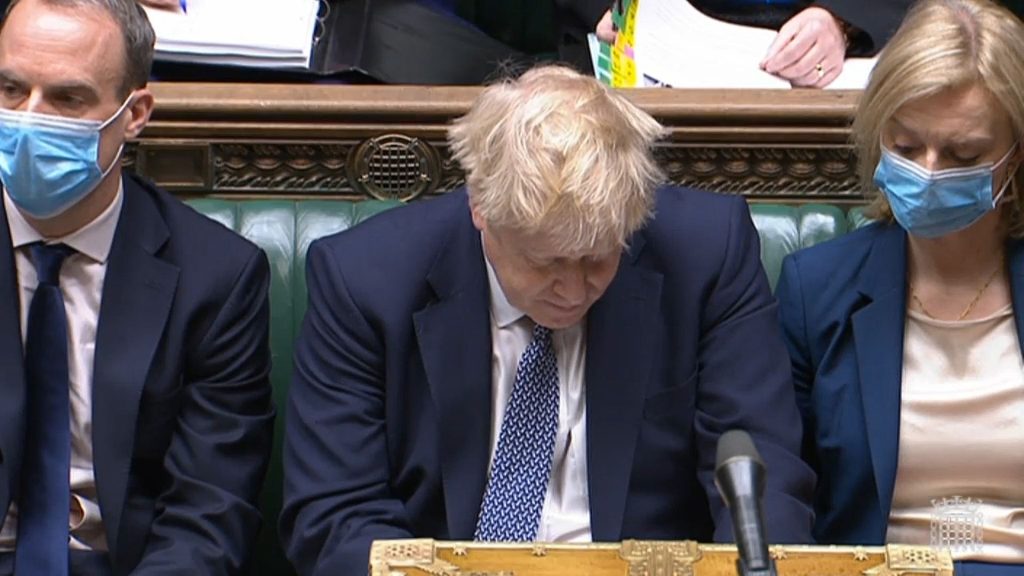 The prime minister is reportedly preparing to oust members of his inner circle over the partygate affair. It comes as another Conservative MP called for him to resign.

As my old pal Dennis Skinner used to say

“WHEN POSH BOYS ARE IN TROUBLE THEY SACK THE SERVANTS”

Boris Johnson is devising a policy announcement blitz and a cull of his top team. It may be in an effort to survive the publication of senior civil servant Sue Gray’s report into lockdown-busting parties in No 10, the Sunday Times reported.

Martin Reynolds, Johnson’s principal private secretary, and his deputy Stuart Glassborow are likely to be forced out of Downing Street, according to the newspaper. It was Reynolds who emailed staff inviting them to “bring your own booze” drinks in the No 10 garden during the first coronavirus (Covid-19) lockdown. No 10 chief of staff Dan Rosenfield’s position could also be at risk. But officials in Downing Street refused to be drawn on the reports of a staff shake-up when asked about them.

Boris Johnson is preparing a plan to stay as PM – with staff sacked instead.

What a coward! For once, he needs to take responsibility. And resign.

The alleged plan comes as a sixth Conservative MP called for Johnson to quit over his handling of the revelations. Former children’s minister Tim Loughton, in a post on Facebook, said Johnson’s position had become “untenable”. And Loughton added that Johnson’s “resignation is the only way to bring this whole unfortunate episode to an end”.

Apologising for the “great hurt” caused to his constituents by the allegations, the East Worthing and Shoreham MP added:

Frankly the issue for me is not how many sausage rolls or glasses of prosecco the Prime Minister actually consumed. The reason for my conclusion in calling for him to stand down is the way that he has handled the mounting revelations in the last few weeks.

Obfuscation, prevarication and evasion have been the order of the day when clarity, honesty and contrition was what was needed and what the British people deserve.

I have regretfully come to the conclusion that Boris Johnson’s position is now untenable, that his resignation is the only way to bring this whole unfortunate episode to an end and I am working with colleagues to impress that view on Number 10.https://t.co/HhjiUHVpPW

Loughton said he knows “what I need to do” if the prime minister doesn’t quit in the “next few days”. It’s an indication that he could be prepared to submit a letter of no confidence in Johnson to Graham Brady, chairman of the 1922 Committee of backbench MPs.

A mounting lack of confidence

Only a handful of Tories have publicly declared that they’ve submitted letters to the 1922 Committee. According to the Telegraph‘s sources, about 20 letters might have been handed in. However that’s still well short of the 54 needed to trigger a leadership vote.

The Sunday Times reported that Johnson will look to get on the front foot and save his position by making a series of what are being referred to as “populist” announcements in the coming weeks. It comes after he admitted last week to attending the No 10 garden party on 20 May 2020.

Johnson will allegedly focus on reducing the NHS backlog and tackling the small boat crossings in the Channel, while freezing the BBC licence fee for two years, it was reported. The Conservative Party leader could also put in place a “booze ban” in No 10 following the series of embarrassing claims of coronavirus rule breaking. In most workplaces, drinking alcohol is prohibited as standard.

Columnist Tim Walker noted that the BBC has not been a big problem for Johnson:

Inconvenient truth: none of the stories that have brought Johnson down were broken by the BBC. pic.twitter.com/GcaIziJ3Y7

The Canary has reported on the numerous times when the BBC actually seemed to provide support to Tory governments.

Apologies (after being exposed)

Downing Street drew the ire of furious Tory MPs as allegations of wrongdoing continued to emerge last week. No 10 was also forced to apologise to Buckingham Palace on 14 January. This was after it emerged that two staff parties were reportedly held on the eve of the duke of Edinburgh’s funeral.

Former minister Andrew Percy, MP for Brigg and Goole, said he was “irritated” staff couldn’t see that such alleged behaviour was “not acceptable”.

Meanwhile, the spotlight intensified on the prime minister’s wife, Carrie Johnson, after she admitted to breaching coronavirus guidelines. The Sunday Telegraph published a photograph of her embracing a friend at a social event in London in September 2020.

At the time, government guidance called for people to “stay two metres apart from people you do not live with where possible”, or one metre if taking the extra precaution of meeting outdoors. The rule of six was in place at the time the photograph was taken, which the paper said was 17 September.

The @metpoliceuk fined Rita Ora £10,000 for hosting a private party just a few months after this, and urged the local council to revoke the venue's licence. I trust they'll be meting out the same treatment to Carrie's pal and this members' club. https://t.co/v0pATSehjH

Mrs Johnson was one of a group of six seated outside celebrating a friend’s engagement. Mrs Johnson regrets the momentary lapse in judgement in briefly hugging her friend for a photograph.

Reports have previously suggested that Carrie Johnson, a former Tory adviser, was present at the 20 May 2020 “bring your own booze” event. A photograph published in the Guardian shows her sat with her husband and Reynolds in the No 10 garden on 15 May, five days earlier.