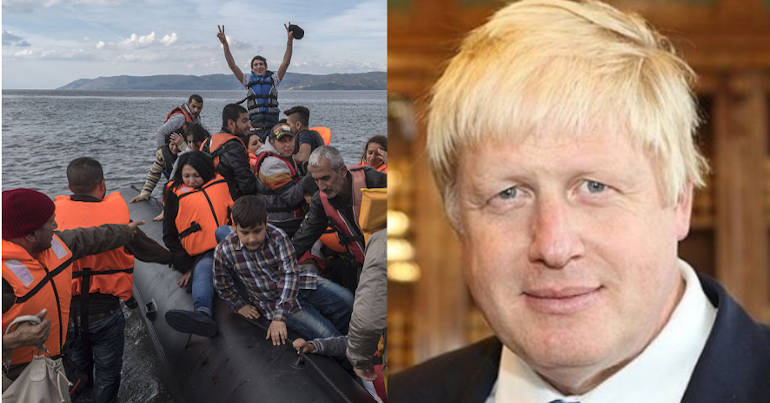 In a desperate bid to cling on to his leadership, Boris Johnson has made devastating announcements that will appeal to his right-wing anti-refugee following. Not only has he stated that he will give the military primary control of the Channel in order to keep migrants out of the country, he has also announced that people reaching the UK are to be processed in either Rwanda or Ghana.

This announcement comes as the racist Nationality and Borders Bill, which has passed its second reading in the House of Lords, is being pushed through parliament. The legislation includes measures such as ‘push-back’ interventions to stop refugees from reaching British waters. It’s part of the government’s inhumane “new plan for immigration” which would rather see people drown than reach safety.

Peace Pledge Union (PPU) argued that the government is trying to distract the public from “partygate” by targeting the world’s most vulnerable people. It said:

It is pure fantasy to suggest that the world’s problems can be solved by armed force. A third of Channel refugees are from countries that have been attacked by UK troops. Now Boris Johnson is deploying those same troops to stop them fleeing to Britain.

Instead of knee-jerk militarism, we need real, grown-up policies that tackle the root causes of global problems. This plan will do nothing to address the threats that we really face, such as price rises, poverty, health crises and the climate emergency.

Even veterans of the navy – whose staff don’t usually have much of a collective conscience when sent in to help with Britain’s war machine – are outraged:

So Priti Patel is planning to use the Royal Navy to turn back refugees in the Channel. As an ex Serviceman I have never been more disgusted in the British Government.
I cannot imagine how the sailors will feel having to obey those orders.

I'm a proud Royal Navy vet and i can tell you now we would never ever leave migrants to drown in the sea, I've been involved in rescuing migrants/refugees all over the world, we get a sense of pride in rescuing people, I'm so fucking offended by this fucking despicable govt…

Yet another person drowns in the Channel

As the government becomes more and more fascistic in keeping people out, Patel has stated that she “won’t be deterred from doing what is right by the British people”.  No-one with an ounce of empathy would agree with Patel and Johnson’s callous policies that leave people to drown. And if they had listened to the thousands on the streets protesting the police bill at the weekend, they would have also  heard across the country that “refugees are welcome here”.

It comes as no surprise that neither Patel or Johnson expressed their sorrow when yet another man drowned in the Channel off Calais on 14 January. He was from Sudan, and fell overboard on a boat containing 32 other people. He was, no doubt, someone who was desperate to find a safer place to live, and he is just one of many who have been failed by our government. Johnson, Patel, and the Tories have his blood on their hands as they continue to block any safe routes across the Channel. And they will be stained with yet more blood when the Nationality and Borders Bill passes.