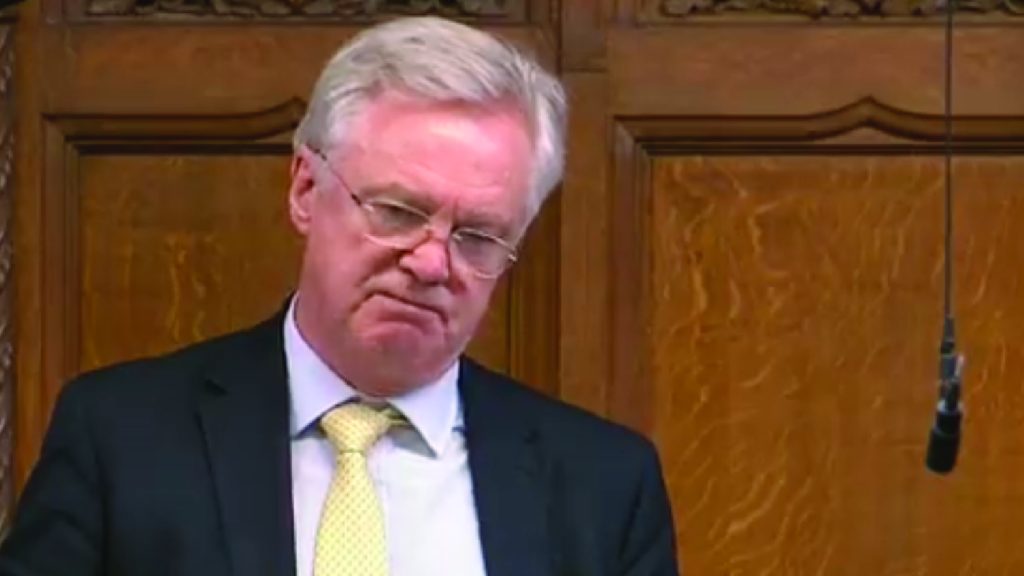 During Prime Minister’s Questions on 19 January, former Brexit minister David Davis used his ‘question’ to urge Boris Johnson to resign. It came not long after Johnson was hit by the defection of a Red Wall MP to Labour.

Impressively, this means the session was somehow even more disastrous for Johnson than last week’s.

Like many on these benches I spent weeks and months defending the prime minister against often angry constituents. ….

I expect my leaders to shoulder the responsibility for the actions they take.

Yesterday, he did the opposite of that. So I will remind him of a quotation, altogether too familiar to him, from Leo Amery to Neville Chamberlain: ‘You have sat there too long for all the good you have done, in the name of God, go.’

Johnson responded by saying “I don’t know what he’s talking about”. His ignorance echoed the moment last week when he claimed he didn’t know that the party he attended was a party.

'You are just taking the mickey out of the British people by suggesting it was a work event'.

'You know how silly that sounds don't you?'

"I repeat my deep apology for mistakes that may've been made on my watch", answers Boris Johnson.https://t.co/iOm40vn1kt pic.twitter.com/naPJvuuRAC

I think I’ve told this house repeatedly throughout this pandemic: I take full responsibility for everything done in this government

It comes as newspapers have been reporting on the so-called ‘Operation Big Dog’. This alleged plan is an attempt from the prime minister to save his job by sacking his staff. Arguably, this would be a case of others taking full responsibility – much like when former aide Allegra Stratton resigned back when Johnson still denied a party had even taken place.

The sight of a Tory calling out the bad behaviour of another Tory has drawn shock from many:

Imagine being so shit you lose the confidence of David Davispic.twitter.com/9itck8sKOL

Davis had more to say too:

‘I voted for him. But I expect leadership. And leadership means shouldering responsibility even when it’s blame. And he didn’t do it.’

‘Yesterday’s interview was an attempt to escape responsibility not shoulder it. And that’s the test of leadership.’

Other Tories, however, seem to have witnessed a different Tory party entirely (lending credence to the idea that Tories can’t recognise certain parties):

Bury South MP Christian Wakeford said the country needs a government that “upholds the highest standards of integrity and probity” but told Johnson “both you and the Conservative Party as a whole have shown themselves incapable of offering the leadership and government this country deserves”. His move to Labour was announced just minutes before Prime Minister’s Questions, which likely would have proven very embarrassing for Johnson if he wasn’t so entirely shameless.

Wakeford won Bury South, which had elected a Labour MP at every election since 1997, in 2019. He announced his decision in the Bury Times and sent a letter to Johnson explaining why he had lost patience with his leadership:

I care passionately about the people of Bury South and I have concluded that the policies of the Conservative government that you lead are doing nothing to help the people of my constituency and indeed are only making the struggles they face on a daily basis worse.

The leader of the Breakthrough Party had this to say on the defection:

What does that say about the Labour Party now?

On the plus side for Johnson, Wakeford’s defection presumably means one less letter of no-confidence:

He acknowledged submitting his letter yesterday and will be on the opposition benches for PMQs https://t.co/gDrU8stcUI