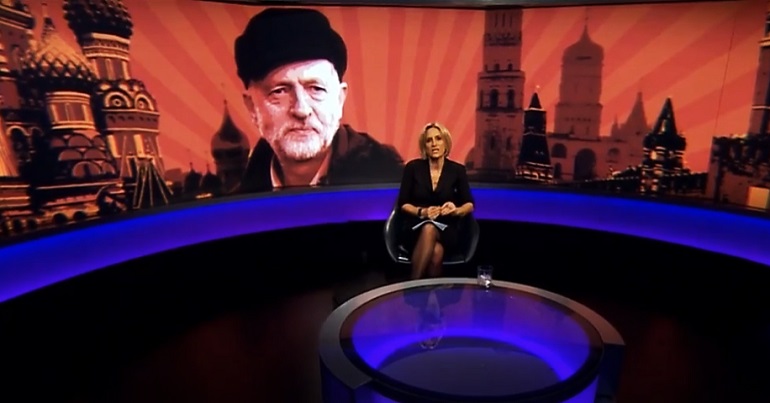 Culture secretary Nadine Dorries has announced a real terms cut for BBC funding, with plans to freeze the license fee for two years. There are several theories on the Tories’ motives. Are they strong-arming the BBC into shape? Reducing funding in retaliation for unfavourable coverage? Or is this a PR manoeuvre intended to appease hard right voters who think the broadcaster is too ‘woke’?

On the face of it, accusing the BBC of having a left-wing slant would suggest a woeful misreading of the political temperature. It’s a talking point that wouldn’t appear out of place on GB News. But while the idea that the institution is biased against Conservatives might be absurd, it would be foolish to dismiss the idea that the BBC has any political leaning in itself – given it has a clear bias against the left.

The view of the right

The persecution complex is a right-winger’s bread and butter. Delusions of maltreatment contribute to a grand victim narrative: mundanities become sinister anti-Conservative plots, evidence of a society that is actively hostile to their beliefs, as opposed to one literally governed by the Conservative Party. The objective of this is to garner sympathy, to convince the wider electorate that if their views are controversial enough to be censored by influential, ‘woke’ progressives, then surely they must be worth listening to.

In 2022, these dishonest tactics manifest in discourse about a culture war. The term of the day is cancel culture, a mostly online phenomenon involving the supposed censorship of Conservatives by the aforementioned ‘powerful’ progressives. This perceived political suppression ranges from online deplatforming, i.e. losing access to a social media account, to being barred from a venue or space such as a university campus.

JK Rowling is perhaps the most high profile, alleged case of cancel culture. The author’s many, many controversial tweets about transgender women may not have hurt her bank account, but did lead to significant online backlash. Perhaps nursing a bruised ego, Rowling characterised this as cancel culture in an open letter, signed by various writers:

The free exchange of information and ideas, the lifeblood of a liberal society, is daily becoming more constricted. While we have come to expect this on the radical right, censoriousness is also spreading more widely in our culture: an intolerance of opposing views, a vogue for public shaming and ostracism, and the tendency to dissolve complex policy issues in a blinding moral certainty.

If the power imbalance inherent in a cisgender celebrity millionaire smearing a historically oppressed community wasn’t damning enough, the fact that said millionaire suffered no professional consequences for her comments should have fatally invalidated Rowling’s notion of cancel culture. It didn’t.

How the BBC fits in

Establishment media is a crucial component in this narrative of persecution, with the BBC – used as both soapbox and scapegoat. Right-wing commentators and MPs alike use the platform of the broadcaster to condemn what they perceive as the left for the cancelling of their politics. Ironically, the BBC itself often becomes a scapegoat for these grievances – a patsy for their image of a left which is somehow institutionally all-powerful and morally craven at the same time.

Even while being interviewed on Newsnight or Politics Live, Conservative figures argue that the broadcaster has a discriminative agenda; that it’s an arm of ‘Big Journalism’ infringing on their freedom of speech, and that diversity quotas are corrupting its audience and programming. This is what informs right-wing support of the licence fee cut-off: as long as the BBC is cancelling Conservatives, it is a moral imperative to defund it.

Of course, this is all total rubbish.

If the media landscape of the past six years has shown anything, it’s that the BBC’s coverage of historically oppressed peoples is far from impartial. Take recent BBC News articles on the transgender community, such as the notorious We’re being pressured into sex by some trans women. When initially published, the piece featured comments by pornographic actress Lily Cade, herself accused of sexual misconduct, who later encouraged the lynching of trans women in a now deleted blog post. Clearly, transgender women aren’t even permitted to date freely without the nation’s most popular, ‘impartial’ news platform associating them with sexual assault. But it’s apparently acceptable for the very same broadcaster to use a cisgender woman accused of sexual assault as a contributor.

BBC News also has a dismal track record when it comes to their coverage, or lack thereof, during protests. Trans right activists were still protesting We’re being pressured into sex by some trans women months after its publication, but the BBC neglected to report on any of such demonstrations, even while protestors rallied outside their London broadcasting house. To acknowledge dissent is to legitimise it.

And who could forget the multiple occasions on which the BBC publicised images of Kill the Bill protestors, after they were circulated by Avon and Somerset Police? A state broadcaster rolling CCTV close-ups of wanted anti-authoritarian protestors – like something out of a dystopian police state. Articles like these have laid bare a reactionary bias that legitimises transphobic tropes, and a contempt for those who reject the Conservative status quo.

Arguably even more pervasive is the BBC’s ideological bias. For some, the broadcaster’s red scare-style vilification of Jeremy Corbyn defined the past two elections. BBC News coverage of Labour’s recent election campaigns continues to be scrutinised, including at an academic level. The former Labour leader and his manifesto were often presented with, at best, an air of exaggerated incredulity, and, at worst, downright cynicism.

The BBC’s complaints division responds to criticism on occasion, but never in good faith. For example, former director-general Tony Hall dismissed allegations of bias as “conspiracy theories” in the aftermath of the 2019 General Election. Also, Newsnight was accused of manipulating a headshot of Corbyn wearing a cap to associate him with communist Russia, by photoshopping a Kremlin backdrop and a shade of Soviet red onto the image. Instead of addressing these complaints, BBC editors only responded to the lesser allegation that they had visually exaggerated the shape of the Labour leader’s hat. Their explanation was a simple technical distortion, a result of “the image [being] projected on to a large curved screen” as reported by the Guardian, though this didn’t explain the colour alteration and background image.

The subtle yet brazen bias of the BBC’s reporting is perhaps not all that surprising given the senior figures at the broadcaster with links to the Conservative Party. But that isn’t changing the minds of anyone on the right. The online behemoth that is cancel culture is a profitable one, generating more political and social capital with every contrived scandal.

A paradox of victimhood

The reality is that the BBC isn’t cancelling right-wingers. They’re providing them with a pulpit; giving commentators access to the most popular news platform in the country, from which they broadcast an incredibly powerful faux victim narrative. Cancel culture isn’t something wielded against the right, certainly not by the BBC – rather, it’s used to undermine and incite violence against the left. Threatening the status quo makes you fair game: transgender people, young protestors, and anyone further left than the most moderate of social democrats are all subject to incendiary smear campaigns.

Conservative diehards who pride themselves on being frank and outspoken have established themselves as puritans of the online realm. They tell themselves that the entire British establishment is out to get them for their traditional right-wing values, but then condemn media for being inclusive or progressive. They are fundamentally the ones addicted to cancel culture. They clutch their pearls at anything which doesn’t fit with their worldview and beliefs, which often includes queerness, Black and Brown people, and sincerity. All the while, they characterise themselves as the only people brave enough to ‘tell it how it is’ amidst a sea of sensitive snowflakes. The outrage surrounding the BBC’s ‘wokeness’ and political correctness before it (a lineage that stretches back to Mary Whitehouse) is simply the cultural indignation of bigots, dressed up as sensible, no-nonsense populism. Prejudice disguised as pragmatism.

Many British political moderates seem to be reluctant to criticise a broadcaster which has essentially become a right-wing propaganda platform. Some feel unwilling to turn on this ‘world-beating’ service, because the alternative is joining a critical voice that is, currently, predominantly right-wing. But it’s important to keep in mind that the Conservatives’ campaign against the BBC, ridiculous as it may be, doesn’t mean that the BBC is in the right. The enemy of my enemy is not necessarily my friend. Hand-wringing about optics is useless: if the BBC is allowed to continue its arbitrary, McCarthyist crusade against the left, then speaking out against biased reporting will always be an uphill battle.

Establishment media will never view even the most moderate of left-wing principles as legitimate, so why worry about the consequences of opposing the establishment? Don’t be tentative to resist an institution that will never approach you with the journalistic impartiality it affords your opponents. Instead, criticise the BBC!

As a progressive, consider that a de facto state broadcaster that has consistently conflated your politics with Stalinism might, in fact, deserve to lose its funding.