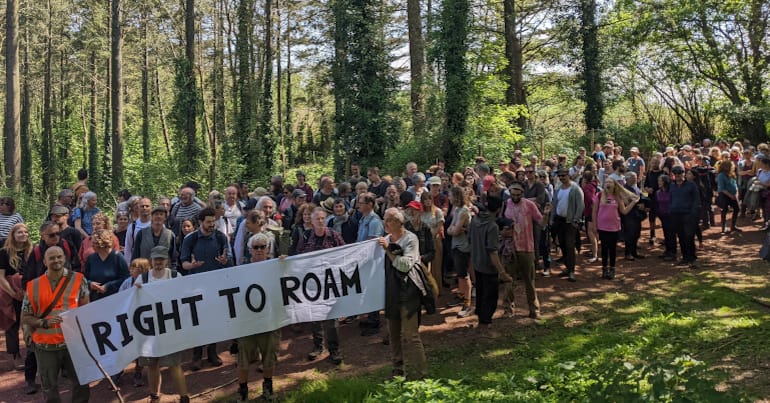 “We’re forced to pick up the crumbs from the table of the landowners,” Guy Shrubsole tells me, as we hike along a forestry track. He continues:

Shrubsole is author of Who Owns England? and is part of the national Right to Roam campaign. We’ve joined hundreds of others to trespass on the Duke of Somerset’s land in Devon. The castle-owning duke sits in the House of Lords. And he’s part of the 1% of the population that owns half of the land in England.

The land we’re trespassing on is off-limits to the public. It’s used as both a forestry plantation and a pheasant shoot. This trespass is part of a wider movement to campaign for our right to roam in England, to claim back our rights to walk, play, sleep and forage on our land.

When campaigning for our right to roam, it’s essential to acknowledge that access to nature is very much a class issue. This is shockingly apparent as we trespass on this particular piece of land, owned by one of the country’s richest men, who’s using it as a playground to shoot game birds.

It is, of course, working class people, as well as Black people and people of colour (BPOC), who have the least access to nature. In 2020, as the pandemic hit the country and international travel was banned, many of us took holidays in beautiful parts of England to give us a break from the cooped-up cities. One of the places that people travelled to was Dartmoor, the only area in England where we’re permitted to camp freely. But we were demonised by both privileged people and the mainstream media.

Of course, with the sudden influx of outsiders, there was outrage about tourists littering and ruining the moorland. News about tents being left on the moor made national headlines. Meanwhile, the Dartmoor National Park Authority (DNPA) put a temporary ban on camping. Instead of appreciating that the pandemic was an exceptional period in history, and instead of posing the obvious question as to why there aren’t more spots where we can freely camp to take pressure off Dartmoor, the DNPA began a consultation on new by-laws that would restrict public camping for good.

This nationwide demonisation of outsiders littering our beautiful moorland does, of course, play right into the land-owning elite’s hands. It suits them to portray us as incapable of looking after nature. If enough people believe that, then they won’t have to truly consider giving us the right to roam our countryside. They can go on as normal, misusing vast swathes of land for their game-bird and stag-shooting bloodsports. And they can continue the disgraceful practice of burning peat moors for grouse shooting, releasing vast amounts of carbon into the atmosphere in the name of tradition.

However, as we trespass the Duke of Somerset’s pheasant-shooting land, it’s crystal clear to all of us that it is the ruling class that’s trashing the land. 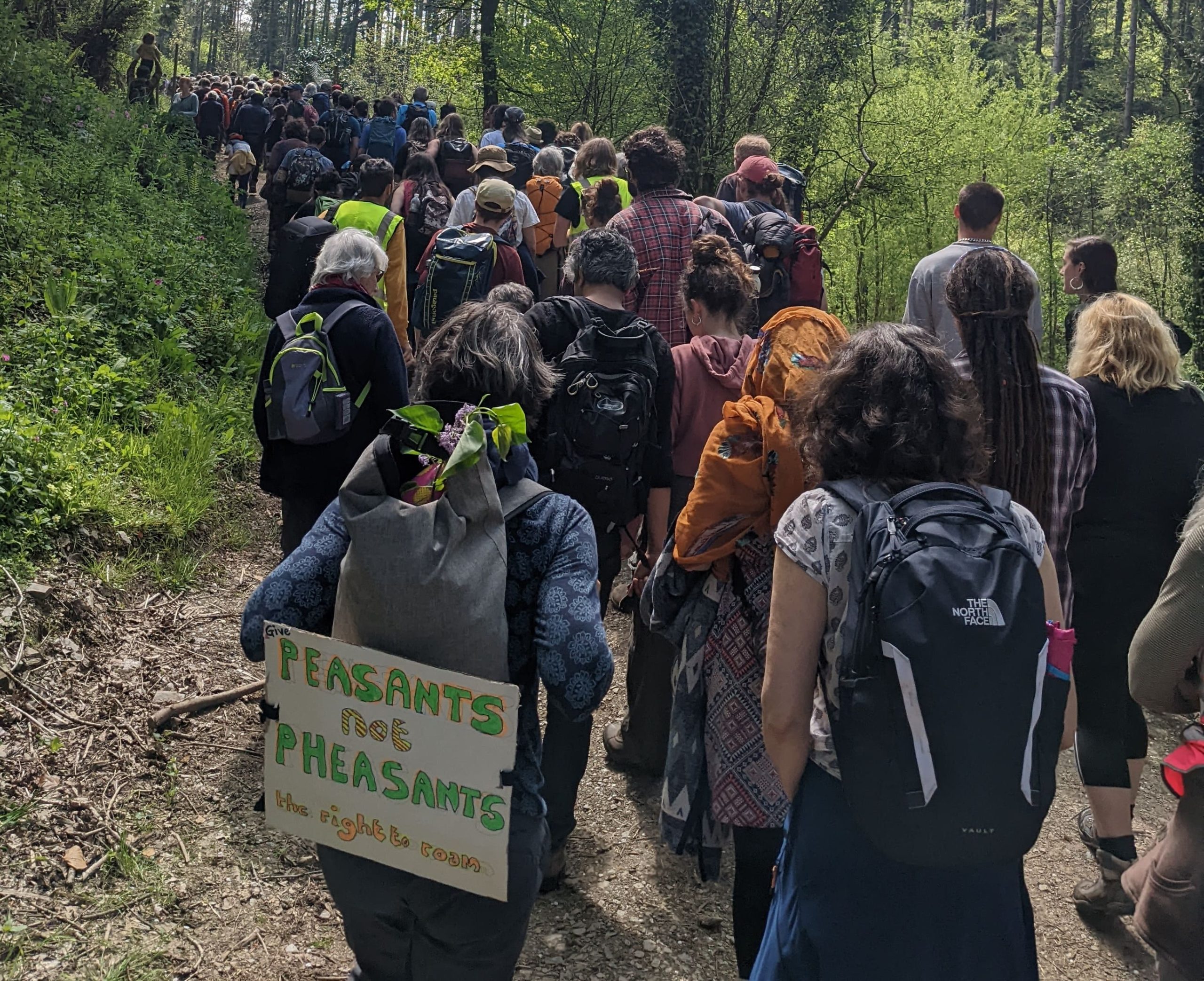 People often say, ‘you can’t have more people in the countryside. They’ll just trash it. They’ll create lots of litter and cause lots of damage.’ Now, often it is the landowners who are the ones causing the greatest damage to the countryside.

Everybody hates litter, but let’s look at the bigger picture here. The Lulworth Estate objected to – as he called it – ‘culturally diverse’ people coming to his land [during the pandemic]. That’s what he said. There was, rightly, fury about that, because of the casual racism, saying ‘I don’t want you townies coming here, you don’t know how to behave.’ But look at how much damage is being caused by the ecosystem here at this pheasant shoot by this landowner, and by landowners like him across the countryside, and that never gets questioned.

On a previous trespass in Brighton last year, Shrubsole told me about photos published in the press of piles of pheasant carcasses being thrown away after shoots. And sure enough, right next to where we are stood, there’s a small quarry, hidden by brambles, that’s being used as a mass grave for dead pheasants. As well as the bloody carcasses, there’s wire fencing that’s been discarded. And there’s even an old washing machine that’s been thrown in there. Shrubsole says:

This is the hidden side of the countryside. Behind the ‘keep out’ signs and the barbed wire fences this is the damage that’s going on, and yet it’s the public who get blamed for littering. We really need to draw back the curtain on that and say that it’s time for all of us to feel welcome in the countryside, and it’s time for us to reconnect to the nature that we’ve been cut off from for so long.

Shrubsole tells me that 50 million pheasants are released into the British countryside every year. And the weight of these birds is more than the biomass of all of the wild birds in Britain put together. It’s an unregulated act by those so privileged that they can do whatever they like to the land – and to wildlife – and not bear any consequences. As we walk together, we pass a giant grain-feed storage bin. With international news headlines reporting a European grain shortage, and with reports of the subsequent food poverty that’s likely to hit the UK, the irony isn’t lost on us.

There’s no regulation over pheasant shooting. You try and re-release a beaver into the countryside, which was here for thousands of years before we killed it off: the amount of paperwork that re-wilders have to go through to reintroduce beavers is insane. And you don’t have to do anything if you want to release thousands of pheasants into your massive shooting estate. 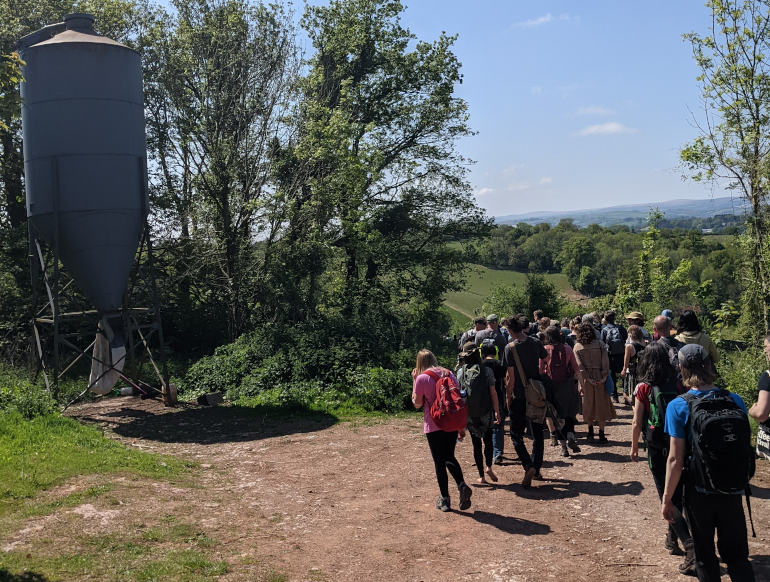 A key step in a greater struggle

Fighting for our right to roam is just a small battle in the bigger fight for land reform. 92% of land in England is off-limits to normal people. And we’re not allowed to swim in 97% of our rivers and waterways.

The Duke of Somerset himself is one of 30 dukes in the UK, many of whom, according to Shrubsole:

benefit from tax breaks on their wealth and have constructed elaborate trust fund schemes to avoid inheritance taxes.

24 of these dukes together own around a million acres of land.

I ask Shrubsole if he thinks the right to roam is enough, or whether he feels that we should aim bigger. He tells me that the campaign is the “leading edge” in the fight for land reform, because it engages a lot of people. He says:

I would like there to be far more awareness of who owns land. Then there’s more that needs to be done to help resolve the housing crisis, and create affordable housing, tenancy, security. There needs to be far more done about land value tax and about the ridiculous farce of farm subsidies being paid out to land owners according to how much land they own, and instead actually being obliged to do something in return for that money if they’re going to get it. And there also needs to be the community right-to-buy as they have in Scotland. So yes, there’s lots more that needs to be done.

Of course, the Tory government is unlikely to willingly hand over this most basic of rights: the right to roam our land. It continues to take away our civil liberties right under our noses, bringing in countless new racist and classist laws.  On 28 April, the repressive Police Bill was finally passed. The new act will disproportionately target Gypsy, Roma and Traveller communities, criminalising anyone living in a vehicle or caravan. And on 20 April, the government announced that it had quashed a review into the right to roam in England and is refusing to publish any results.

However, the right to roam campaign is gathering momentum fast, and more and more people are joining the struggle. As a working class person, I urge you to join us on the next mass trespass. I urge you to be an ally not only to the country’s least wealthy but to BPOC people, too, as we aim to decolonise the countryside of its middle- and upper-class whiteness.