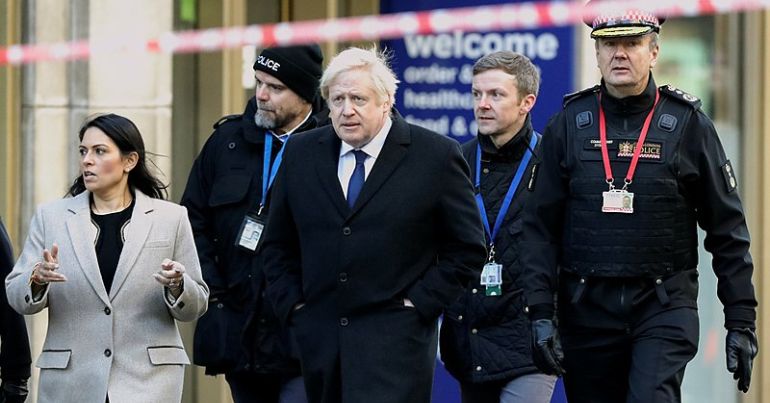 Campaigners, charities, and a union will face the government in the High Court today. Their mission? An injunction to stop the Tory government sending refugees who arrived in the UK to Rwanda.

They will argue that the plan, devised by home secretary Priti Patel, and backed by prime minister Boris Johnson is unlawful as well as entirely brutal.

The Tory line, predictably, is that ‘leftie’ lawyers are interfering with a legitimate process. But the truth is, Patel and Johnson’s problem isn’t with lawyers – it’s with the rule of law itself.

Patel herself previously claimed that those who oppose her plans are leftie lawyers. But this has become a default line for many on the refugee-bashing right:

Priti Patel has said from the start that lawyers (she said “leftie lawyers”) would try to block the plan. But that her department had done all the legal work to take on those challenges 3/

The basic argument reads like a far-right conspiracy theory: lawyers – those who represent refugees, for example – are some sort of crypto-socialist activists undermining Tory schemes, which of course are in the country’s best interest.

The Law Gazette recently took issue with an outlandish claim by Johnson when he said:

When you look at Labour, you see a party that voted consistently against tougher sentences for serious sexual violent offenders. The Labour opposition has consistently taken the side of, I’m afraid, left wing criminal justice lawyers against, I believe, the interests of the public.

Classic right wing drivel, wherein it is the Conservatives (yes, the austerity people) defending the public’s interests against lefties.

And bear in mind the deportations are opposed by the United Nations among others.

The bizarre logic of the anti-refugee camp was captured in the Daily Mail recently. Where else?

In that right wing fantasy land, the government should be applauded. The likes of Patel and Johnson are deporting refugees to a dictatorship to help them. This is a “bold, imaginative scheme” to combat the “vile” trafficking trade which brings people across the Channel to England.

Lawyers, meanwhile, seeks “to impose their political ideology — even against the will of the British public — through the ruthless exploitation of our ramshackle legal system”, or so writes the Daily Mail:

These ideologues care nothing for our national interests, only for the triumph of their dogma and the humiliation of the elected government.

The truth is the Tories will try to fight every battle as part of the culture war. And the Rwanda scandal is no different. They want to frame any opposition to their plans as a left-wing conspiracy carried out to the detriment of the country.

The ‘activist lawyer’ trope was also wheeled out when the Tories were legislating on behalf of British war criminals, which culminated in the Overseas Operations Bill. That legislation aimed to protect veterans of past (and future) wars from criminal investigations by victims of British foreign policy.

Theresa May even wheeled it out in 2016, for example, at the Tory party conference in a bid to appear patriotic:

We will never again — in any future conflict — let those activist left wing human rights lawyers harangue and harass the bravest of the brave, the men and women of our armed forces.

The Tories are doing what any government would do with a large majority: remaking the world in their own image. The assault on desperate refugees is precisely in keeping with that. And to justify it they’ve made up an enemy. In this, and other cases, that enemy is a largely fantasised ‘activist left-wing lawyer’.

But the truth is the Tories’ real enemy is the rule of law itself.