Biden and his fans are cosplaying as antifascist again - Canary 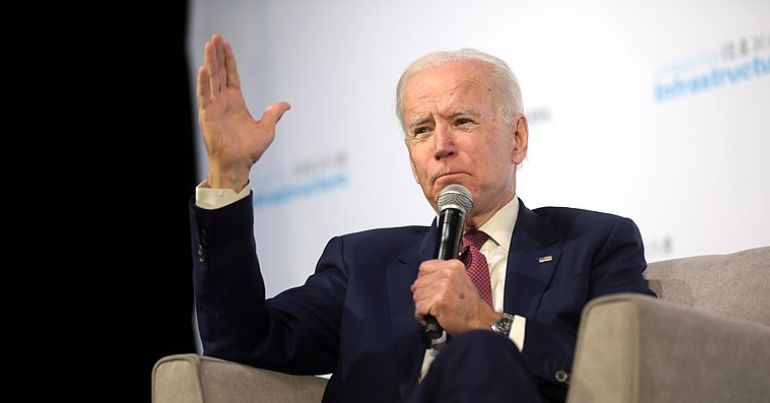 US President Joe Biden gave a major speech in Philadelphia last night. His mission: to speak to the soul of the nation. In his address, he blasted Trump supporters as un-American, attacked Capitol insurrectionists and lauded his own record on topics like extremism and gun control. He described Trump backers as “semi” fascist, which saw some aligned with the ex-president demand an apology.

Biden’s supporters were clearly exhilarated, tweeting their admiration for the president. Some hailed his example:

Others rather strangely compared him to arch-Conservative Winston Churchill:

Remember when Churchill apologized for calling fascists what they are???

One commenter said that the speech drew a line between democracy and fascism:

Anyone who thinks the speech was divisive has betrayed America for a psychopath who terrorized our Capitol & purloined our secrets@POTUS thank you. That was one helluva speech

But American politics have never been so clear cut. The framing of Biden as an antifascist, or even a man of the left, is both highly partisan and factually wrong. And pointing this out is by no stretch of the imagination Trump apologia.

Trump is a vile figure, a buffoon who rode to power on, among other things, a wave of hate. No argument there. But reality defies simple interpretations of his replacement.

Biden may be more palatable to an audience of wealthy white liberals than Trump, but he too is a product of the hyper-capitalist, imperialist American body politic. That is to say the politics of a white settler state steeped in, and built on, class and racial violence. And this is reflected in Biden’s policies.

Biden’s foreign policy has continued in a similar vein to his predecessors. His administration has poured billions of dollars in arms into the Ukraine conflict. Despite assurances, he has overseen a continuation of the humanitarian disaster in Yemen.  He inherited the Afghan war and oversaw the disastrous retreat from the country in 2022, for which he has been fiercely criticised.

His approach to China also reflects a continuation of US foreign policy. Some foreign policy experts have warned that Biden’s approach will echo the War on Terror with Sinophobia sitting alongside the demonisation of Muslims which became standard in post 9/11 discourse.

Support for Israel remains an unquestionable. In July 2022, Biden restated his commitment to the country and announced himself a Zionist:

The connection between the Israeli people and the American people is bone deep, and generation after generation that connection grows. We invest in each other. We dream together.

Despite saying he was supportive of Black America, Biden ultimately rejected one of the movement’s key demands: defunding the police. In 2021, Biden pushed for more police numbers. He even suggested billions in emergency funding meant for the pandemic response be used to employ more officers.

In his comments on the topic, he folded cops in with vastly different kinds of public sector and community workers:

This is not a time to turn our backs on law enforcement or our communities.

On migration – another flashpoint topic under Trump – one US factchecking service claimed in January 2022 that apprehensions at the Mexican border went up 317% under Biden’s first month in office compared to the same period for Trump. The Biden government has also detained ten of thousands of asylum seekers, according to an April 2022 report in The Intercept.

Since coming to power Biden has made some lukewarm criticism of Wall Street. In June 2022, he told an audience of trade unionists that he would not alter any of his economic reforms and vowed to pursue billionaires and firms over taxes:

Yet the fact remains Biden, like any US leader, is a Wall Street president to the hilt. He enjoyed $74mn in support from Wall Street leaders during his election run. More, it is estimated, than Trump himself.

His rhetoric over cancelling student loans, which haunt so many educated Americans, have turned out to be hot air. Some of those affected said the amounts being considered in debt forgiveness would barely register:

It cost me $400,000 of debt for the chance to complete my degree. And the interest keeps accruing. $10,000 is a patronisingly small amount for the staggering cost of education in this country.

Objectively speaking Biden is preferable to Trump clearly. But that’s doesn’t mean he is good. Not when the bar is so terrifyingly low, as the UK experience will also attest.

Biden sounds better than Trump, true again. And he may not be riding a wave of out-and-out fascism. But the liberal capacity for war, violent policing, and unfettered capitalism is hardly something to get excited about.

The truth is that for those being bombed, starved, incarcerated, or murdered by police, it makes very little difference whether it is a bumbling far-right populist pulling the proverbial trigger, or a slickly packaged but equally bumbling centrist.

The only people who get a kick out it are US Twitter liberals, who can pretend for a moment that politics is a sort of live action roleplaying game in which they, naturally, are the good guys.