An eco-defender imprisoned for resistance against HS2 is released - Canary 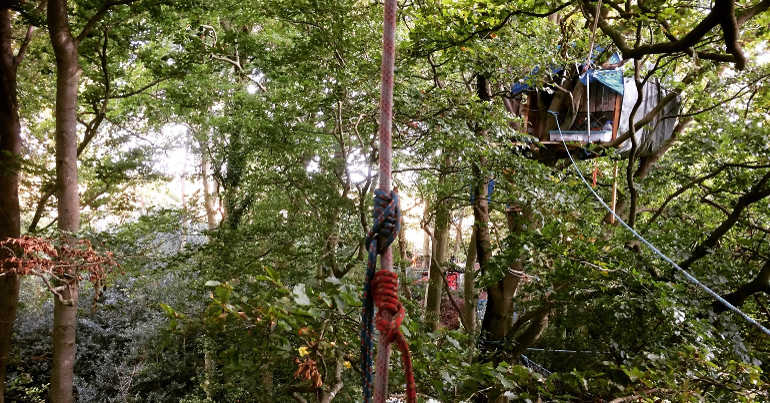 A campaigner against HS2 was released from prison on Monday 5 September, after a successful appeal. Dave Buchan had been sentenced to 100 days in prison last month for breaching a civil injunction.

❤️😘Huge 𝕝𝕠𝕧𝕖 and thank you for everyone who sent Dave messages of support while he was in prison!😍💚 Today he's had a successful appeal against imprisonment & is being released within 48 hours after serving 40 days in prison for protest against ecocidal #HS2. #StopHS2 pic.twitter.com/07ZiQOQkXr

Dave’s imprisonment came after months of intense resistance at the Bluebell Woods Protection Camp where an area of woodland near Swynnerton in Staffordshire – nicknamed Bluebell Woods – is under threat of destruction from the HS2 High Speed Rail line.

Dave’s arrest followed the eviction of campaigners from tunnels below the site. The campaigners had been resisting eviction for 47 days, in what was reportedly the longest tunnel occupation in UK history.

Dave was not one of the people alleged to have locked down in the tunnels. Instead, he was found guilty of contempt of court after appearing late to a hearing at Birmingham Crown Court on 27 July. He was accused of breaching a HS2 civil injunction, and was sent straight to prison.

Dave reportedly said that he had appeared late at the hearing because the only attempt to let him know that he had to be in court was through a Facebook message from HS2. Because of this, he had not been able to arrange legal representation.

The Canary contacted HS2 for a comment on the claims that their summons was served by Facebook Messenger. We had not received a reply at the time of publication.

The HS2 campaigners say that Dave’s breaches amounted to simply:

entering onto HS2 land which was unfenced and where no construction work was taking place.

Civil injunctions are one way in which companies are trying to stamp out resistance and protests outside their premises. The High Court grants a list of conditions that campaigners need to abide by. Typically, these restrictions make acts which would not normally be considered a criminal offence punishable by imprisonment for breaching the injunction.

Civil injunctions are increasingly being used against ecological campaigners. According to a press release from campaigners:

Anti-protest injunctions have also been taken out against Insulate Britain, Just Stop Oil and the Stop the Stink campaign against Walley’s Quarry near Stoke on Trent.

HS2 has recently applied for a wider injunction covering the entire route of its proposed high speed rail line. It is now awaiting the judge’s decision.

The campaigners argue that the injunctions:

are HS2’s way of ‘buying their own laws’ to silence opposition by making trespass imprisonable through the civil courts.

The HS2 campaigners argue that Dave’s imprisonment shows that HS2 will use its planned route wide injunction to try to imprison its opponents:

Dave’s case shows that a Route Wide Injunction will not be used to simply prevent unlawful protests against them, but to imprison people who have committed absolutely no crime and have simply shown opposition to the project, or stepped foot on HS2 land.

Despite Dave’s successful appeal, the fact that he was imprisoned at all should stand as a warning for us all.

A new wave of injunctions to protect corporate power

In the 2000s, civil injunctions were increasingly used by companies as a way to crush dissent. Injunctions were obtained restricting protest by animal rights, anti-militarist and ecological campaigners. Several people were sent to prison as a result. However, injunctions fell out of fashion after several successful attempts by campaigners to resist them through the courts, and campaigners refusing to comply with their conditions. But in recent years a new wave of injunctions has begun to be used against environmental campaigners.

More and more injunctions are being arbitrarily granted by the courts to protect the economic interests of corporations and shield their bosses from protestors who are calling for an end to environmental destruction. It is deplorable that protestors are the ones standing trial for breach of an injunction, whilst the bosses eliciting the destruction of life on earth are being protected by the courts.

Civil injunctions have been used many times over the last two decades to suppress direct action and dissent. We need to keep a close watch on the new wave of civil injunctions being used to repress environmental protesters. It’s important that we support people facing repression, and stand with those who are carrying on resisting in the face of these injunctions.

Featured image is of a treehouse in another HS2 protection Camp at Jones Hill Wood, via Ross Monaghan with permission