Chile Constitution: Rights of indigenous peoples and nature at stake in vote 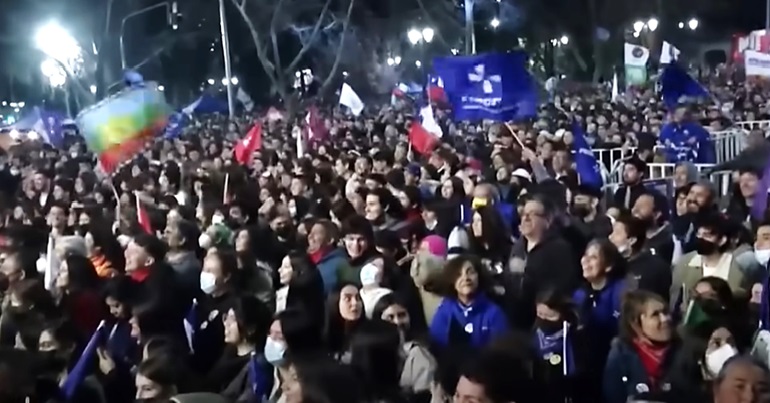 Citizens in Chile are voting on whether to approve a truly world-leading constitution on 4 September. Ahead of the big day, people and communities around the world expressed their support for the principles it would enshrine.

In October 2020, Chileans overwhelmingly voted to replace their existing constitution. It’s a relic of the dictatorial Pinochet era and essentially prioritises neoliberalism above all else. Citizens elected a 154-member group to draft a new constitution, equally made up of women and men.

As the New York Times highlighted, the result is a sweeping constitution that promises changes in multiple areas, such as universal health care, and rights to clean air, water, and much more. Its approval would mean Chile has “more rights enshrined in its constitution than any other nation” on Earth.

On Sunday the Chilean people can vote for a new constitution, replacing the old anti-democratic one written by the dictator Pinochet with a new one guaranteeing rights to health, housing, education, and a habitable planet. I am proud to support this effort.

Progressive International pointed out in mid-August that the Chile constitution has attracted the support of over 200 political and trade union leaders from around the world:

BREAKING (1/4): Over 200 political and trade union leaders — from @RashidaTlaib to @jeremycorbyn, @marcio_monzane to @Marc_Perrone — have launched a global campaign to celebrate Chile's new democratic constitution ahead of the plebiscite on 4 September: https://t.co/rO5LjakTnQ

More recently, western media outlets have highlighted that polls suggest voters may reject the constitution amid widespread misinformation. The Guardian has reported on numerous bogus claims that have circulated about what the constitution will bring, such as the confiscation of private property. Outlets have also pointed to disquiet among industries like mining that benefit from the neoliberal status quo.

Nonetheless, significant support has been evident in Chile at rallies ahead of the vote:

There’s a huge feminist rally in Santiago today in favour of Chile’s proposed new constitution a week before the plebiscite.
The constitution enshrines gender equality and the right to a life free from gender violence (🎥 @isidoradonosok) #Caupolicanazo pic.twitter.com/lw6MUaONZ2

The draft Chile constitution significantly empowers indigenous communities, including in relation to sovereignty over their lands.

Chile is on the verge of making history for Indigenous Rights. If the new constitution passes, over 2 million Indigenous Chileans “would be able to govern their own territories.” A huge act of reparations paid. #Apruebo4deSeptiembre #AprobarEsHumano 🇨🇱https://t.co/oEoSWiCpEC

Chile’s newly proposed constitution sets a precedent for the U.S. and other governments to not only recognize it is beyond time to update our draconian constitutions, but also that integrating Indigenous rights into our core laws will move us towards truly achieving equity and justice.

As an article in the Conversation also noted, the constitution offers “astoundingly progressive” reforms in relation to protections for the natural world. It contains no less than 50 provisions related to the environment, including granting nature constitutional rights. Ecuador granted such constitutional rights to nature in 2008. Its experience shows that they can safeguard precious ecosystems against extractive practices like mining. The University of Melbourne academics who wrote the Conversation article asserted that:

Chile has crafted one of the most progressive and environmentally conscious legal texts on the planet.

Unsurprisingly then, the new Chilean constitution has attracted attention and support among environment-focused groups:

This Sunday, Chileans go to the polls to vote on a historic eco-constitution. Want to know what’s at stake for mining? A thread with 6 key highlights from @olca_chile #ChileVotaApruebo #Chile | https://t.co/X1R19HGn13 🧵1 pic.twitter.com/NTvok0DWha

We stand with the people of #Chile, as they head to the polls to vote whether or not to approve a visionary new constitution. The proposed constitution is one of the most progressive in the world, an achievement of decades of social movement organizing. #ChileVotaApruebo ✊🏾✊🏿✊🏽 pic.twitter.com/Ygu0GRKH2W

In short, a lot is at stake for Chileans in the referendum vote, not least for the country’s president Gabriel Boric. Moreover, the groundbreaking protections the constitution lays out for people, other animals, and the planet overall provides a stunning example to citizens around the world of what a just future for all could look like.