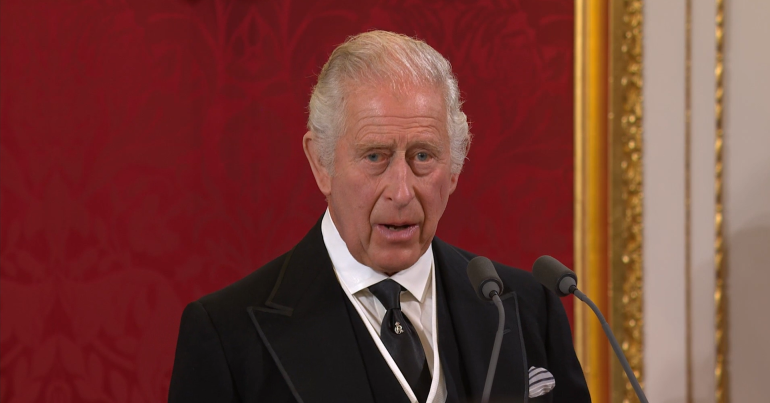 If you read the mainstream media, you’d be forgiven for thinking the whole of Scotland is in mourning as Queen Elizabeth’s coffin arrives in Edinburgh. Thousands are lining the streets to pay their respects to the former ruler.

However, less covered in the media are the thousands who feel disgust at a monarchy that epitomises colonialism, oppression and racism. There were protests in both Edinburgh and Cardiff as Charles Windsor was proclaimed King Charles III.

In Cardiff, people held up signs in Welsh and English saying “It’s colonial subjugation of the Welsh people”, and “Not our King”. Meanwhile, in Edinburgh, a 22-year-old woman was arrested for breach of the peace as she held up a banner which read “Fuck imperialism, abolish monarchy”. Police Scotland wanted to emphasise to The Canary that the woman wasn’t arrested for the banner itself. Presumably, then, the police arrested her because they only allow freedom to protest when it doesn’t offend the majority.

As the Queen’s coffin was being driven through the streets of Edinburgh, police also arrested a 22-year-old man after he heckled the disgraced Andrew Windsor. Once again, the arrest was made under breach of the peace laws.

Arrested for ‘expressing an opinion’

In England, activist Symon Hill was also arrested in Oxford for his part in protesting the proclamation of King Charles. Hill gave his account of the ludicrous arrest in Bright Green. He said:

It was only when they declared Charles to be ‘King Charles III’ that I called out ‘Who elected him?’ I doubt most of the people in the crowd even heard me. Two or three people near me told me to shut up. I didn’t insult them or attack them personally, but responded by saying that a head of state was being imposed on us without our consent.

Security guards then attempted to push Hill before the police came and took hold of him themselves. Hill continued:

I was outraged that they were leading me away, but was taken aback when they told me they were arresting me. I have no illusions about the police’s questionable relationship with the law, but I seemed to have been arrested for nothing more than expressing an opinion in public.

Thames Valley Police confirmed to The Canary that they had arrested a man for the offence of harassment, alarm or distress. The force said:

A 45-year-old man was arrested in connection with a disturbance that was caused during the county proclamation ceremony of King Charles III in Oxford. He has subsequently been de-arrested and is engaging with us voluntarily as we investigate a public order offence.

Of course, anti-monarchy protests aren’t unusual, and nor are arrests surrounding them. In fact, members of the public are often pre-emptively targeted by the police before a royal event even happens. This is, perhaps, unsurprising given that the monarchy is an important tool to brainwash people into believing that Britain is actually great – that we are all united rather than divided. It upholds the false narrative that we’re all British together, and the police are all too quick to silence prospective dissenters.

Perhaps the best example of pre-emptive arrests was during the lead-up to William and Kate’s wedding back in 2011. Five squats across London were raided, and the police made twenty arrests. Others were also arrested as they sipped coffee. Their crime? Supposedly that they would carry out some kind of breach of the peace.

The Canary contacted the Network for Police Monitoring (Netpol) for comment. Speaking about the latest arrests, Kevin Blowe said:

This isn’t the first time that spurious arrests have been made during royal events. In 2011, people dressed as zombies were arrested during the royal wedding while sitting in Starbucks. In 2002, during the Golden Jubilee, 41 people sitting in a pub were arrested. Any time there is a royal event, the police act disproportionately to ensure that opposing voices are not heard on the streets.

The police won’t shut down dissenters

The police should know by now that pre-emptive arrests will never totally prevent dissent. One example of this was when Charles and Camilla’s car was surrounded and targeted by protesters in 2010, as the couple drove into London’s infamous student protests. The demonstrations saw thousands on the streets as they protested the trebling of tuition fees.

The royals were so out of touch with the public that they thought nothing of driving a Rolls Royce, flashing their obscene wealth, into the centre of the city at a time when young people’s futures were being destroyed in the name of profit. People were, understandably, outraged.

Of course, as we gear up for the Queen’s funeral, the majority of the public prefer to believe the narrative that we’re all British together, mourning an old woman that they didn’t know, rather than facing up to the legacy of colonial oppression for which she stood. However, there’s a growing number of people who have had enough of idolising racist oppressors, and who will continue to make their voices heard.