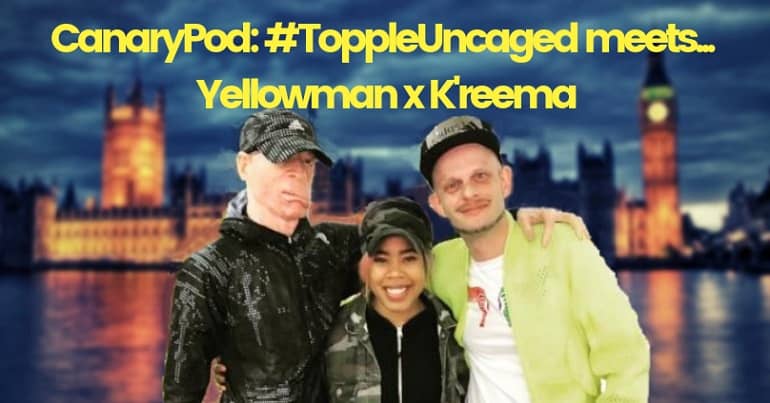 In a special episode, I met the royal family of dancehall music: the legendary Yellowman and his daughter K’reema.

Yellowman has had a career spanning over 40 years. He set the standard for many of the dancehall artists that have had success since the 1980s. Most recently, he released his first album in 15 years. It’s called No More War, and is a masterful blend of traditional roots reggae mixed with RnB, lovers rock and more. The album is extremely conscious, continuing Yellowman’s groundbreaking approach to releasing music with a message. But he still mixes it up with more fun tracks.

Meanwhile, his daughter K’reema is making waves herself. She’s a songwriter, singer, producer, record label executive and fashion designer – all of which are centred around her father’s legacy. Her exquisite voice is showcased brilliantly on tracks like Don’t You Worry, as is her ability to mix up musical genres.

So, I caught up with them for the #ToppleUncaged podcast, just before their final show in the UK. We discussed both their projects, the current music scene, Yellowman’s legacy, touring and more.

No More War by Yellowman via Yellow Baby Records:

Don’t You Worry by K’reema via Yellow Baby Records:

Download Yellowman’s album No More War on your preferred platform.

Also download K’reema’s EP Drop It on your preferred platform.

Read more about Yellowman and K’reema. Also find out about her record label Yellow Baby.