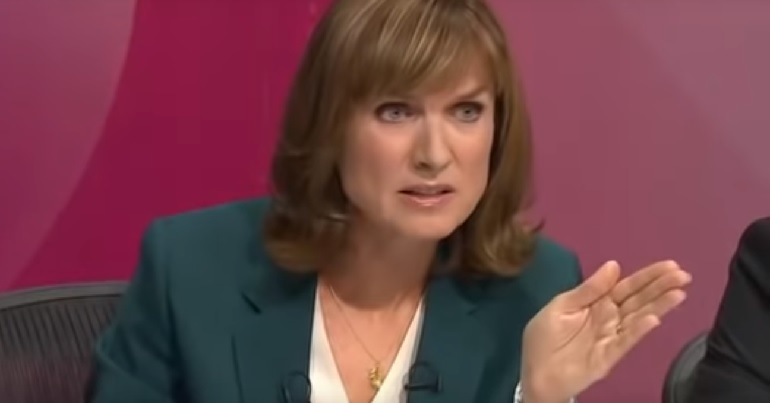 Shadow foreign secretary Emily Thornberry was on BBC Question Time on 5 September. And she raised an important issue that should make all Conservative Party supporters uncomfortable. But that seemed to be one step too far for millionaire host Fiona Bruce.

Thornberry was scathing about Boris Johnson’s appalling start as prime minister. But it was when she mentioned Britain’s foodbank crisis that Bruce felt the need to step in, saying “we’ve heard all that”. This sparked outrage online:

Gobsmacked. Watch BBC silencing discussion on foodbanks in the week School Kids set up 100s of food banks to feed the mates in class who are finding it tough. pic.twitter.com/FvaUo9dL7E

Yes, when will Labour stop boring ppl about poor ppl, foodbanks and all?? It was shocking…

Emily Thornberry: “we want to stop the food banks”

Fiona Bruce: “we’ve heard all that”

#BBCQT
Emily for the first time mentions food banks & Fiona straight away says “yeah we’ve heard all that.”
This is the attitude that most presenters, journalists & commentators have had towards the issues that face the most vulnerable in society.
They’ve normalised inhumanity.

Fiona Bruce didn’t interrupt Kwasi or Tice. And she dismissed a grave point about food banks, almost as if she didn’t care. Having worked with her before, she is very smart but not right for this job #bbcqt https://t.co/lC1IXIFo49

Thornberry: We want to stop the foodbanks-

Bruce: We’ve heard all that.

Appalled? You should be. A dismissal of the fact a number of people growing daily can’t even feed themsleves so that millionaire Richard Tice can shout the same thing for the 15th time.#BBCQT

In April, the Trussell Trust revealed that foodbank use in the UK hit a record high. It handed out 1,583,668 three-day emergency food packages from April 2018 to March 2019. Over half a million (577,618) of these went to children. It noted that this “is an 18.8% increase on the previous year”. And over the past five years, the number of food parcels handed out across the UK rose 73%.

On 18 August, meanwhile, the Mirror wrote:

Figures released today by Meals and More shows up to four million children are at risk of ‘holiday hunger’, with more than two million of these (53 per cent) being under the age of five. This proportion is up from 51 per cent last year.

And it highlighted that:

This is because school holidays put “extra financial pressure on families who are eligible for free school meals in term time”.

It’s a crisis. And we need to talk about it.

As Jeremy Corbyn’s Labour has consistently stressed, Brexit isn’t the only issue British people face today. The country also needs mass social investment to recover from a decade of destructive ideological austerity led by the Tories and enabled by centrists like the Liberal Democrats. Just one policy in this period – cutting public health spending – has led to over 130,000 premature deaths in the UK. And a 2018 UN investigation concluded that “14 million people, a fifth of the population, live in poverty”. Report author Philip Alston said:

Britain is certainly capable of eliminating most, if not all, of its poverty if it wanted to. But it’s clear that there’s a political choice: that it doesn’t want to. It would prefer to offer tax cuts to the wealthy than to remove hundreds of thousands, maybe a million or more, out of serious poverty.