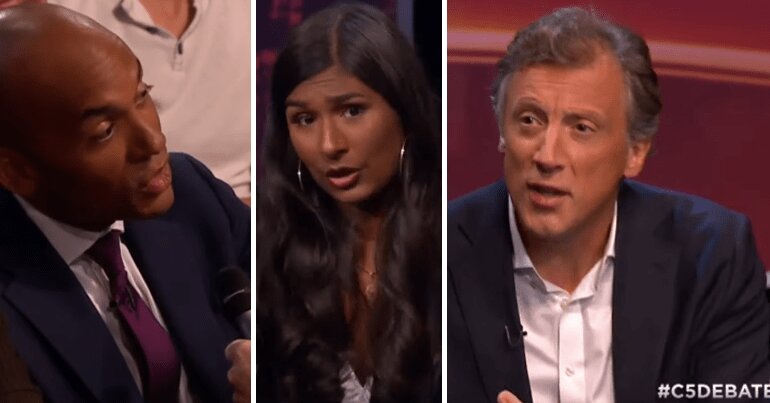 Tensions ran high on Channel 5‘s debate show on 2 September. Novara Media senior editor Ash Sarkar took aim at the inherent biases displayed by the show when she appeared on it.

One of the main forces that’s supposed to hold our politicians to account is our press and our media… And if I may say so, I’m very, very grateful for being invited here, but this show is the perfect example of it. We’re having a discussion about trust in politics where some of the main panelists have distinguished themselves and their careers through dishonesty…

Sarkar went on to say:

we grossly overstate the adversarial relationship between the pundit class and politicians… The big lie here is that we’re set up to have a big old bunfight, we all disagree, we’re having a go at each other. But in the green room everyone is… air kissing and ‘how are yous’ because they’re on the same speaker circuits, they all go to the same cocktail parties, and fundamentally they represent the same establishment interests.

LBC host Iain Dale then cut her off, acknowledging the problem as he did:

To which Sarkar replied:

One: I don’t get invited to cocktail parties.

Again, Dale seemed to acknowledge Sarkar’s point as he joked:

There’s a reason for that.

Sarkar has a point

Sarkar identified a key issue with the pundit class. Many regulars on broadcast media act like they are opposed to each other when really they are ideological bedfellows or even friends.

Take the BBC and its former weekly politics show. Author Alex Nunns analysed 19 episodes. And he found the BBC had brought on pundits well to the right of the political spectrum on every show. By contrast, the public service broadcaster included people on the genuine left only three times. That left 16 episodes without a meaningful leftist viewpoint from any of the three guests.

Sarkar’s right. Often corporate media pundits “all represent the same establishment interests”. This is why real change can only happen through independent media, social media, and grassroots conversations between friends, families, and colleagues. With a general election on the cards, these mediums will prove crucial.