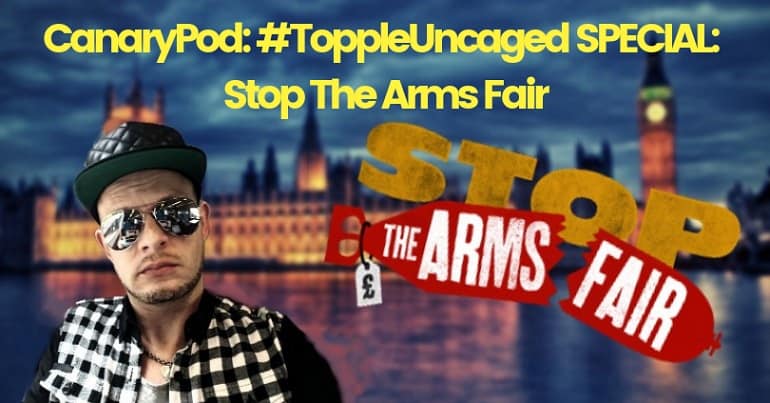 In a special episode, I caught up with two Canary journalists who were on the front line of one of the most important direct action protest of the year: “Stop The Arms Fair”.

Emily Apple and Fréa Lockley, along with Canary colleagues Eliza Egret and Tom Anderson, extensively covered the protests against the Defence and Security Equipment International (DSEI) arms fair this year. As the website for Stop The Arms Fair noted:

DSEI… is the world’s largest arms fair. It allows arms buyers and sellers to network and make deals. It happens once every two years, in the second week in September, at ExCeL – the huge exhibition centre in London Docklands.

The fair is supported by the UK government, and in 2017 direct policing costs were just under £1m. Meanwhile, protests against DSEI have been happening for around 20 years. This year, Canary journalists were constantly reporting from on the ground, witnessing not only the extent of the protests but also the actions of the police.

So, I chatted to them for the #ToppleUncaged podcast. We discussed DSEI, the police presence this year, the global ramifications of this arms fair and what more can be done to combat this nefarious industry.

Refuse to Kill by Lowkey via Going Underground:

The Rhyming Guide to the Arms Fair by Potent Whisper:

Read The Canary‘s full coverage of Stop The Arms Fair.

Find out more about the campaign.

Read more info on the military industry from Campaign Against the Arms Trade.