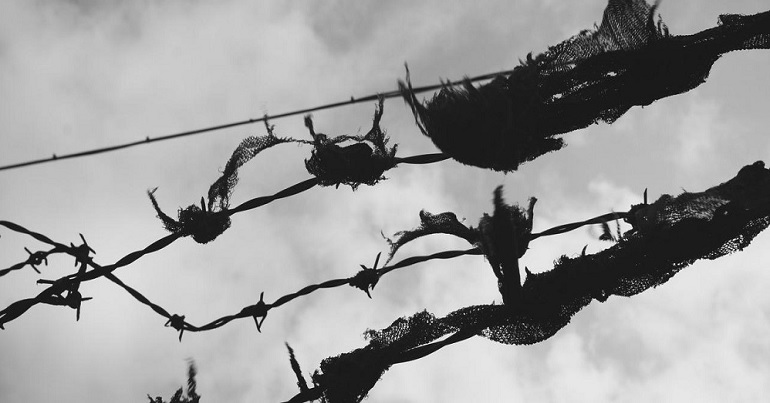 A formerly homeless artist has launched his latest exhibition. It’s a bold and challenging installation, showing the raw and personal thoughts he has on himself and his life. And it’s shining a light into the reality of being homeless in the UK.

David Tovey is a photographer, painter, installation artist, and performance-maker. He’s exhibited in locations such as the Atsa Festival Montreal, Somerset House, Tate Modern, and Tate Liverpool. He’s also the founder of the UK’s first One Festival of Homeless Arts. His latest work My Solitude is currently on display in Gloucester. The Canary caught up with Tovey to find out more about what drives him.

Tovey describes My Solitude as a “snapshot into my mind, portraying personal experiences and emotions during specific times in my life”. It charts all manner of experiences: mental health issues, addiction, terminal illness, homelessness, and suicide. The exhibition uses photography to chart Tovey’s experiences. It’s a collection of photographs taken over the past six years that try to describe who Tovey is, and how he came to this point in his life:

But Tovey is unsure whether viewers will even ‘get it’:

It may be extremely hard to explain to the viewer, as most of the time I don’t even know who I am. I know I’m alive; well I believe I am – but that’s just because I’m breathing, Does that actually mean that I’m alive? I’m not sure, you see, so the photos describe this. They’re blurred, over exposed, broken, damaged but also perfect and poetic all at the same time. You see they’re a second in time, a blink. A passing out, a hit. A punch, a snapshot. I guess what I’m trying to say is I’m pretty fucked up mentally and I hope that this exhibit will give someone a view point of what its like to live with head problems, addictions, alcoholism, mental health, terminal illnesses, and so on.

My Solitude does not only consist of photography. Tovey has also installed some large-scale charcoal mixed media pieces and short films which can be watched via VR code on the posters in the exhibition. But perhaps the most interesting piece in My Solitude is a park bench. It’s moving between three locations around Gloucester. Tovey hopes that people will “sit and contemplate but also meet a stranger on it”. The bench is particularly personal because as Tovey describes in this video, his life “was saved” while he was on a park bench:

I sit in my chair, filled with despair…

Very public personal reflections about his life are a hallmark of Tovey’s work. From A Soldier’s Story, which reflected on his experience in the armed forces, to My Solitude, he uses his own life as a starting point for commentary on wider issues. But it’s not always been easy for him to find the resolve to do this. He explained that when he first caught the public eye through an article in The Independent he was “nervous” as he was essentially ‘coming out’ as homeless:

The article was how I told friends and family about being homeless. I was extremely nervous about it being published as I was putting myself in the public eye, open to be judged and stigmatised against. But when it came out I had letters from all over the world saying how my story gave them hope, and I know it saved several people’s lives with them reading about me. That’s when I decided that I had to keep telling my story so I could stand up for the people who are stigmatised and judged for just being poor or having an addiction.

There’s no one could be so sad

And ‘standing up’ Tovey has been. From his first photo exhibition called Pulling the Positive from the Negative in an underpass near Charing Cross station where homeless people congregate, to founding the One Festival of Homeless Arts, he is constantly pushing back against negative stigma surrounding homeless people and rough sleepers via his own, deeply personal experiences.

There’s often a misconception that homeless people and rough sleepers have addiction and mental health issues because of being homeless, not in spite of it. And Tovey believes it is vital to break down these barriers, which all too often stop people getting the support they need:

I’m sick of seeing so many people in pain because of being judged for something completely out of their control, then being shunned and down trodden for the rest of their lives because of it. What gives people the right to judge someone for that? How fucking dare they. I volunteer at two shelters, teaching art to guys who are so broken from being on the streets that they’re too scared to even talk now because of the way they’ve been treated. And then we have the right-wing media stoking the fires and blaming the poor for everything that’s wrong in society. This is bullshit. I would like to see how the people who judge and stigmatise these broken guys would survive on the streets. They wouldn’t be able to. Until the media change their attitudes we will never see a change.

Tovey believes that the arts have a crucial role to play in this. After the last time he tried to end his life in January 2015, he turned this experience into Man On A Bench, a street fashion show on London’s Southbank. He dressed models in clothes made from discarded material and clothing because he believes:

We can take rubbish and re-purpose it and create beauty, we can do the same with homeless people: pick them up from the streets, help them with their problems, retrain and create some confident amazing humans. It worked with me.

This show led to press interviews, which in turn got politicians involved. He’s now working on the charity Shelter’s ‘Big Conversation’ commission. He’s confident that art really can make a difference.

Tovey is my kind of artist. As someone who has been homeless, an alcoholic, and been sectioned due to his mental health, I find his use of his experiences via art to try and improve the lives of others inspirational. But ultimately it’s what the public think of Tovey’s work that will make the difference:

I would like them to take away some understanding, some compassion, and hopefully some empathy towards people who may be going through a rough time in life. But also take away some hope that life can get better if the right social structures are in place. If someone leaves the show and goes and says hello to a guy sat in the street and has a conversation and swaps names with each other then I’d be happy. Because its always starts with a hello.

My Solitude is running from 10 to 30 March at Gloucester Cathedral.

– Find out more about Tovey and also My Solitude.