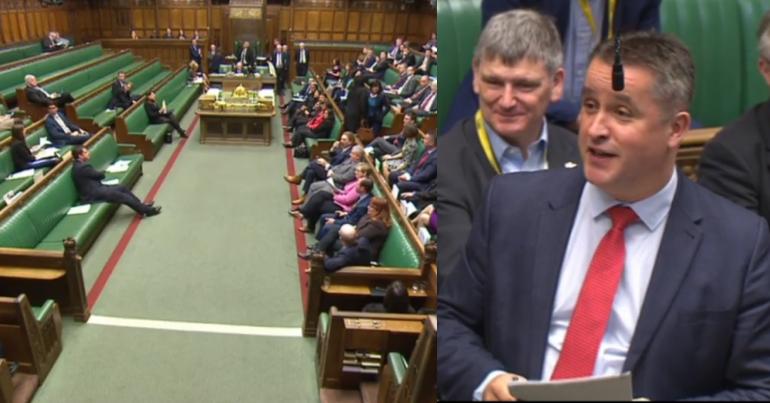 Theresa May is probably hoping we’ve all been too distracted by Russia to notice the fact that her government received a massive blow on 16 March. But human rights groups are celebrating after a bill supporting reuniting refugee families passed its second reading in the House of Commons.

Opposition MPs and rebel Conservatives joined together to gain a total of 129 votes in favour of the principle of the refugees family reunion bill. 42 MPs voted against the bill.

MPs from across party lines joined in support of the changes put forward by SNP MP Angus MacNeil, who claimed the current system was “inhumane”. But turnout for the debate was considerably higher on the opposition benches.

The passing of the bill, alongside the support from Conservative rebels such as Anna Soubry, will be a blow for the government, who has said it will oppose it at later stages.

What does the bill seek to achieve?

The private member’s bill can be broken down into three key points:

The Red Cross has detailed restrictions in current legislation that stop children over 18 from joining their parents with refugee status in the UK. And refugee children cannot sponsor their parents to join them in the UK under the current law.

It is estimated that changes in the law would mean an additional 800-1000 people would be eligible for refugee status.

Introducing the debate in parliament, MacNeil thanked MPs from all parties for uniting behind the bill. He said:

This shouldn’t be a bill about party politics…It’s about compassion…. humanity as well.

If I have any criticisms of what I’m trying to achieve, it is that my bill is so small. My bill is so little and is actually unspectacular. So unspectacular that we should have no problem at all in passing this bill.

Former Lib Dem leader Tim Farron chastised the Tories for trying to “talk down” the bill. While the SNP’s Alison Thewliss accused MPs of “filibustering” and uttering “despicable falsehoods”:

Sitting in @HouseofCommons listening to despicable falsehoods being uttered by Tories against refugee family reunion as they try to filibuster @AngusMacNeilSNP’s Bill. Shame on them. #FamiliesTogether

Conservative MP Ranil Jayawardena was one of those arguing against the bill. The MP said the aid contribution of the UK must be praised. But he claimed the bill was simply “virtue signalling“.

Jayawardena argued that the changes could act as a pull factor for refugees. He also suggested the bill could lead to sexual assaults and terror attacks.

The MP faced opposition during his lengthy contribution. And he was met with cries of shame at the end of his speech.

“A good day for humanity”

The government is threatening to whip MPs in order to block the bill at a later stage. But campaigners and human rights groups have celebrated the bill moving forward.

Oxfam and Safe Passage UK were among those championing the result. Laura Padoan, UNCHR’s spokesperson for refugees, claimed it was a “good day for humanity”:

'It's a good day for humanity. This is for the refugees!' HUGE thanks to @AngusMacNeilSNP for seeing the refugee family reunion bill successfully through its second reading. We did it! #FamiliesTogether pic.twitter.com/OWWCBbjUd2

Well done everyone, we did it. The Bill is through to the next stage. Well done to @AngusMacNeilSNP for bringing the Refugee Family Reunion Bill and getting cross-party support.

Today I am supporting the #FamiliesTogether Bill to change the unfair Home Office rules which prevent refugee children bringing their close family members to join them in the same way an adult can.

Labour respects the right to a family life. pic.twitter.com/Zh5BGQoOOL

The strong support for the bill shown by the rebel Conservative MPs today will worry the government. Already fractured on issues such as Brexit, the government will struggle to whip MPs into line. If the opposition maintains a united front, they may be able to push the bill all the way.