Groundbreaking new theatre show brings a 90s band to life, even though it didn't exist - Canary 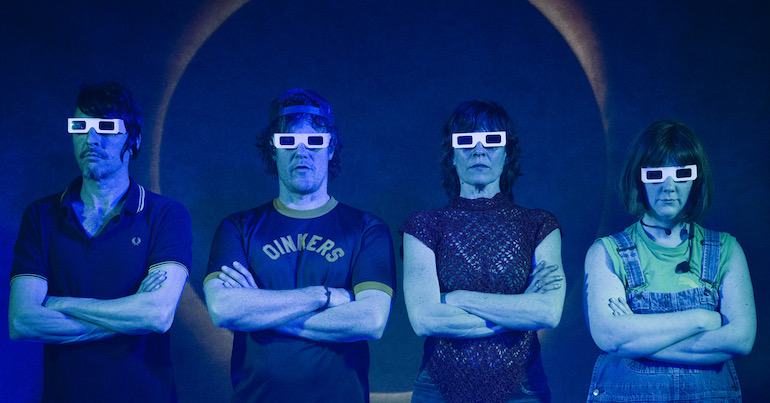 Endless is a new comedy show that explores the rise and fall of ‘N:Dless’, a fictional 90s dance group. It’s sometimes hard to recall the days before Simon Cowell-manufactured pop dominated the charts. But this show charts a decade where consumerism hadn’t yet taken control of festivals, and free parties were still free. Merging an innovative mix of live theatre, music and film, the show also documents a generation that knew how to party.

“Themes of a rock and roll nature”

Endless is the latest play from comedy masters Trifle Gathering. Director and writer Kyla Goodey and Sally Crooks (who plays youngest band member Eggy) have a rich history of producing theatre that:

Their latest show delivers this through a visually stunning blend of live music, comedy, pop videos, and documentary interviews. N:Dless is the band that never quite made it, but didn’t stop trying. It’s clear from the outset that they split up. As the countdown to a reunion begins, the play explains why. It also explores the deeper undercurrents of friendship, creativity and family dynamics along the way. Musical egos and fragile insecurities mix with the totally surreal. With a stunning sleight of hand, the show leaves you convinced that the band did exist and that you always were their biggest fan.

“I only popped out for a lemon”

Audiences witness the intimate, often ludicrous conversations between Sarey (Mary Woodvine), Malcolm (Dean Rehman), Dave (Joe Carey), and Eggy (Crooks). But as decades and years skip, the audience is also moved seamlessly from watching the band perform live at a festival one minute to viewing a reflective documentary about them the next. It could be confusing, but strong performances delivering a powerful script ensure that these transitions are effortless; as does the comedy.

What sets this apart as a piece of theatre is the stunning mix of film and live performance. The N:Dless documentary, in particular, is standout. 90s legends like Simon Ratcliffe from Basement Jaxx and Chumbawamba’s Boff and Harry recall their memories of N:Dless, alongside other lesser-known 90s dance ‘stars’. This level of knowing self-awareness adds another poignant layer of comedy, not least because audiences also witness the band’s unique method of ‘writing’ profound lyrics. And this, in turn, makes seeing N:Dless perform hits like Ripe for the Restroom even funnier too. Where the classic line “I only popped out for a lemon” came from, though, remains a beautiful mystery.

“Coming of middle age music documentary for the stage”

Audience members who danced through the 90s will recognise many familiar characters in this play. The talented cast effortlessly brings long-forgotten stereotypes back to life. From Afghan hats and a didgeridoo to full hands in the air dance numbers, it’s a breath of theatrical fresh air to laugh through these memories. But the play also holds equal appeal for all age ranges. The 90s was a time largely before the internet, mobile phones and the proliferation of people self-documenting their every move. So for those who didn’t dance through it, the play offers a window into, and back to, this time. It also charts a generation that knew how to party – not in pricey clubs but in fields and warehouses across the UK. And that infectious energy shines through.

The richly textured light and shade of Goodey’s script doesn’t hold back. The best comedy is always bittersweet, and she’s a writer who has perfected this interplay. The shift from the highs to lows of the characters and the band’s history make the comedy moments funnier, and also creates truly thought-provoking theatre.

Outstanding acting and beautifully observed characters alongside the multi-media elements give this show a unique quality that extends beyond the decade it records. It’s definitely a show to catch if you can.