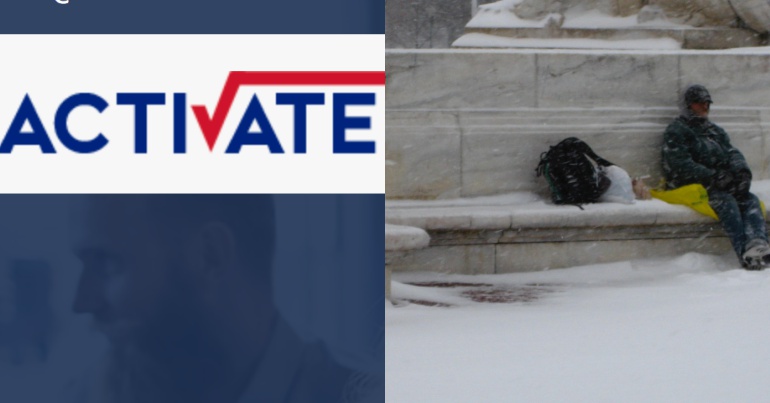 Severe weather is still battering the UK and Ireland. Thousands don’t have power. Transport is in chaos, and roads are closed. Entire communities are cut off. At least ten people have died. But the biggest indictment of Conservative Britain is that homeless people have died in these storms.

And yet, despite everything, the kindness of strangers has been in evidence everywhere in an attempt to limit further tragedy. Unless you’re a young Tory, it seems. Because in the face of all this, Activate UK – the “united platform for young conservatives” – has sunk to an all-time low.

In the midst of one of the biggest storms for years, Activate tweeted:

But people on Twitter were swift to challenge them:

You are not making any sense. Are you trying to joke about that poor and elderly people will die of cold because they can't afford to pay for heating? Homeless people dying on the streets of UK – shame on you.

The truth is that a man died, sheltering in a tent from the cold and snow. Another homeless man died in a shelter. The death toll reportedly stands at 13, and may rise. Not surprisingly, many were swift to cut down Activate’s ‘joke’:

Yes, very funny that. Do you also find this story hilarious? https://t.co/ikKRXnWd4y

Others pointed out just quite how ridiculous and immature Activate sounded:

My 13 year old went round the neighbours today to see what they needed, then did a 45 minute round trip walk to Aldi to get their groceries. She went to about 90 doors.

A better use of her time than mocking poor people on Twitter.

There’s actually a very serious point here. Activate UK presents itself as a “grassroots” organisation for young conservatives. And it supports a Conservative Party that is currently two points behind Labour in the latest opinion polls:

But even this backfired, because a block from Activate quickly became a badge of honour:

Not all superheroes wear capes

What Activate and its ‘supporters’ missed (or are blatantly too dim to recognise) was the true beauty of spirit that shone through and continues to shine as the storms rage on.

In hospitals around the country – the same hospitals left decimated by Conservative funding cuts, staff slept overnight or did extra shifts to ensure patients were cared for:

Please help us get #ThankYouNHS trending today for all the NHS staff who have:

And all so they can care for our loved ones pic.twitter.com/Z44Ny4QaQ5

Taxi companies, meanwhile, offered to help the elderly for free. Others went out to offer hot drinks and blankets to people stuck in cars:

Also heard from incredible volunteers in Milnrow braving the cold to take blankets and supplies up to drivers – many of whom are travelling with babies and families. https://t.co/QYlasHoWdY

Acts of kindness were seen everywhere.

Activate appears not to realise that the word ‘socialist’ isn’t an insult. Because it means we care for each other. We are happy to help each other. A simple fact that Activate, and the Conservatives, may never understand.

– No one should be rough sleeping in this weather. Call Streetlink if you see someone who needs support.

– Support Help the Homeless, which gives grants to homeless charities across the UK.