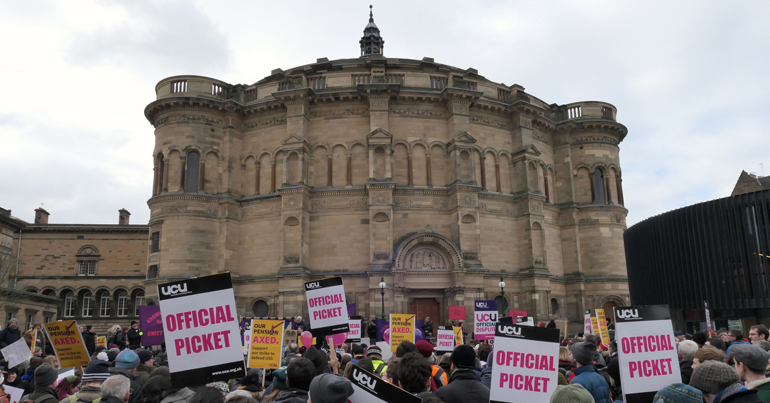 Universities have threatened to further dock pay of striking workers in a move that the University and College Union (UCU) warned could “prolong industrial action”.

The strike is in response to changes in university pension schemes. The adjustments could result in a yearly loss of around £10,000 per year.

UCU members are currently engaged in Action Short of Striking (ASOS). ASOS is work that disrupts the normal flow of business but isn’t severe enough to be classified [pdf, p16] as an actual strike. Several universities have announced they will be docking pay for staff who fail to reschedule cancelled lectures. The University of Kent has stated that it will withhold 50% of pay for ASOS. And the University of St Andrews took more drastic steps [pdf] stating that failure to reschedule classes would result in 100% of payment docked.

But a spokesperson for St Andrews told The Canary claimed:

No pay is being deducted from staff who are carrying out all their normal contractual duties and any suggestion to the contrary is utterly false.

The law is on the side of the universities in this instance. Docking pay for ASOS is technically legal.

Punishing the “most vulnerable employees”

Meanwhile, Kent University is accused of punishing “its most vulnerable employees”. PhD student and teaching assistant Leon Schoonderwoerd claimed that almost twice his monthly salary was being docked:

The move has been criticised by UCU who warned that the confrontational approach taken by certain universities could backfire:

Universities imposing overly punitive measures would annoy members and do nothing to help progress talks due to begin on Monday.

Universities that wish to exploit the law and punish their staff as much as possible are storing up problems for the future and risk prolonging the dispute.

Action short of a strike highlights just how much universities rely on the goodwill of their staff who go the extra mile. Universities will need that goodwill when this dispute is all over, so it seems foolish to find ways now to maximise the punishment of their staff.

This latest move by certain universities is a blow to the efforts of UCU members. But there are signs that the strike action is working. The University of Sheffield backed down on its initial plan to dock pay. Meanwhile Cambridge University vice-chancellor, Professor Stephen Toope floated the idea of the institute adopting its own tailor-made pension scheme if further talks were unsuccessful.

The Canary contacted Kent University for comment but had not received a response at the time of publication.