The strikes in universities are about more than just pensions - Canary 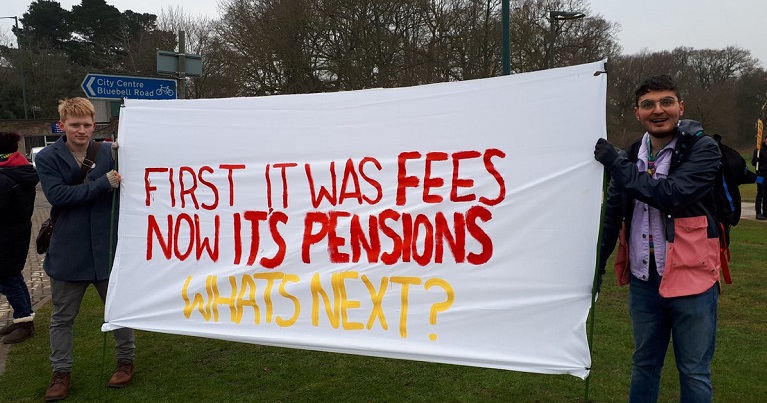 Higher Education has been in the headlines again recently. This time it isn’t because of the never-ending debate about free speech and oversensitivity on campuses. Instead, it’s about the start of the biggest strike in the university sector’s history over staff pension changes. And it’s also been about the baffling proposals from the Government to vary tuition fees based on potential future salaries.

An attack on education

Over the last week, the Conservatives and university bosses, represented through Universities UK (UUK) have been effectively attacking the university system.

UUK has proposed pension changes that would see staff pensions based on market performance, rather than being a guaranteed income. As a result, staff could lose out on around £10,000 a year. The University and College Union (UCU) argue that UUK are refusing to enter meaningful negotiations over the dispute, so staff are going on strike in dozens of universities through February and March.

As for the Conservatives, in an apparent attempt to woo younger voters, Theresa May announced a review on tuition fees, six years after the disastrous £9k fees were introduced. May is considering introducing different fee levels for different courses, based in part on how much graduates can expect to earn in later life.

This will likely lead to two things. Firstly, it will embed the idea that the primary purpose of education is to produce ’employable’ young people. It could also turn universities into more of a market, where students are savvy consumers rather than learners.

Marketisation is the problem, not the solution

These proposed changes to fees and pensions would essentially inject competition, markets and capitalism into every level of universities. Because the government appears to assume, as many others have done before it, that somehow this will make public services more efficient and effective.

Education is a public good

The current funding model for universities essentially encourages them to compete with one another and become slick business operations. Ones that rake in as much money as possible and spend masses on the pay packets of senior staff.

But our universities should be accessible to all and focus on actually educating students and delivering research. That means we need to scrap tuition fees which price poorer people out of education and saddle students with a lifetime of debt. It means paying staff well, in work and retirement, as well as ensuring decent working conditions. It means curbing obscene pay at the top.

The pensions strike over the next few weeks is a crucial part of that. If staff are defeated, it will not only impact those involved but also the whole education system. A victory for the bosses will be a victory for the market in education. A victory for staff will be the start of a new fightback on the frontline for economic justice.

– Read more articles from The Canary about higher education.

–  Find out how you can support the pensions strike.