Despite ‘outrageous and regressive attacks’, the DUP is refusing to give Irish people language rights - Canary Workers’ Co-op 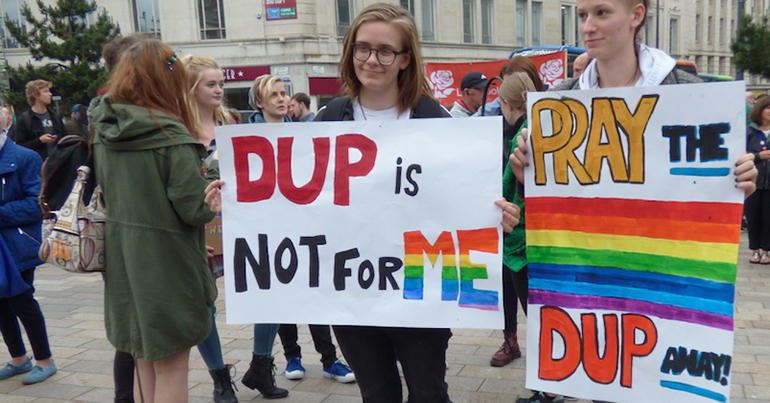 The DUP has stated it would never contemplate signing up to a stand alone Irish Language Act (ILA). But the Eamonn Mallie website leaked documents that appear to be at odds with the DUP position.

Theresa May and Irish prime minister Leo Varadkar travelled to Belfast on 12 February hoping to restore power-sharing in Northern Ireland. But two days later talks collapsed with the DUP and Sinn Féin blaming each other.

The Eamon Mallie website published draft documents that appear to show the DUP was going to agree to an ILA. The documents leaked on Mallie’s website also show evidence of email confirmation that Arlene Foster gave Sinn Féin a hard copy of the draft.

It is unclear why the DUP was not “contemplating bringing in an Irish language act”, given similar Acts exist for Welsh and Scottish.

Furthermore, it was agreed [pdf, p11] in the 2006 St Andrew’s Agreement – an agreement that restored power-sharing in Northern Ireland – that:

The Government will introduce an Irish Language Act reflecting on the experience of Wales and Ireland and work with the incoming Executive to enhance and protect the development of the Irish language.

constantly asked to justify why our rights are needed.

Mac Giolla Bhéin also said that the Irish language has been subject to:

a number of outrageous and regressive attacks.

He also highlighted education minister Peter Weir’s rejection of expanding the Irish school sector. This is in addition to communities minister Paul Girvan’s decision to cut an Irish language bursary known as Líofa.

DUP in the media

The DUP has denied that a draft agreement was in place. In an interview on BBC Northern Ireland’s The View, DUP deputy leader Nigel Dodds MP denied several times that the DUP had such an agreement in place stating:

I have no knowledge of that, I would be highly surprised if that happened.

While the previous week on The View, DUP MP Jeffrey Donaldson stated the draft was:

the latest iteration in a whole series of… documents that were exchanged between the two parties.

A DUP spokesperson told The Canary:

The talks collapsed without agreement because there wasn’t a fair and balanced deal. The DUP stands ready to form an executive without any preconditions. That’s our preferred outcome. However, we are now focused on delivering a budget for schools, roads and hospitals through Westminster and ensuring there is a sensible Brexit.