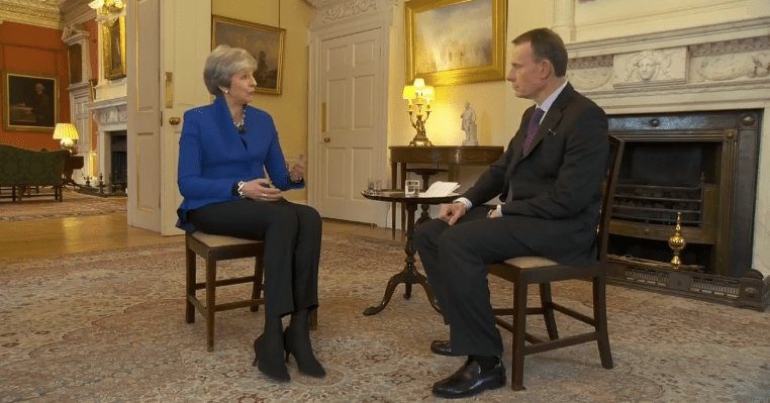 Viewers can’t stop talking about the stunt the BBC pulled against Jeremy Corbyn on 4 March. On the Andrew Marr Show, Theresa May took part in a pre-recorded interview straight from Downing Street. This stands in contrast to Marr interviews with Corbyn which happen live. Not only that, but not a single supporter of the Labour leader appeared on the hour-long show.

Cosy interview with Theresa May

The Marr Show flagship interview was pre-recorded from No 10. That helps the Conservative leader in a number of ways. The setting is not only comfortable for May, but statespersonlike. She also avoids any surprise questions from the Sunday paper stories.

The interview resulted in criticism on social media:

Why does @theresa_may get to do a prerecorded party political broadcast aided by @AndrewMarr9? She's pushing one of the most damaging things that's happened to the UK in more than 70 years and therefore should be challenged live. #Marr might as well be Sunday Brunch

So Theresa May another non live recorded interview with #marr wow!!! What is that?

Joking apart this is not an interview in any meaningful way. It's a presentation by May mediated & assisted by a presenter. It's like something from Mugabe's Zimbabwe, not a mature democracy. Seriously @BBC this shames you. #marr

A spokesperson for the BBC told The Canary that May took part in three live interviews in 2017. They futher stated:

It has long been a tradition of the programme to interview the Prime Minister of the day at Downing Street which is pre-recorded.

Others challenged the complete lack of substance in the interview itself:

It takes some skill to be interviewed for twenty minutes on the most complex and controversial issue facing the country and say absolutely nothing new or interesting, but Theresa May managed it there. #marr

Not a single supporter of the Labour leadership

Viewers tuning in to the BBC on Sunday morning may well expect a balanced view. But the BBC bombarded them with right-wing perspectives. This left an array of people branding the show a “party political broadcast” for the Conservatives:

There now follows a party political broadcast by the Conservative party… https://t.co/eGkPNrWp3Q

The UK guests included Conservative prime minister Theresa May, former Conservative work and pensions secretary Iain Duncan Smith and former Conservative election candidate Iain Dale. None of the guests could in any way be said to reflect progressive viewpoints or the Labour leadership. The others were close ally of Tony Blair, Peter Mandelson, and deputy editor of the New Statesman, Helen Lewis.

Responding to The Canary, the BBC claimed:

We take impartiality very seriously and maintain balance across the series.

But there is a similar pattern on the BBC’s Sunday Politics. Author Alex Nunns counted how many right-wingers appeared on the show during the second half of 2017.

In 19 episodes, the BBC brought on pundits to the right of the political spectrum on every show. In contrast, the public service broadcaster included people on the genuine left only three times. This left 16 episodes without a meaningful leftist viewpoint from any of the three guests.

The BBC needs to sort its act out. It’s not just that the programmes are politically biased. It also risks failing to understand political developments because the official opposition is severely underrepresented. Jeremy Corbyn’s Labour took 40% of the vote at the 2017 general election. It’s time our public service broadcaster reflected that.

Watch the interview with May here: