Solidarity with homeless people is increasing. It must not melt away when the sun returns. - Canary 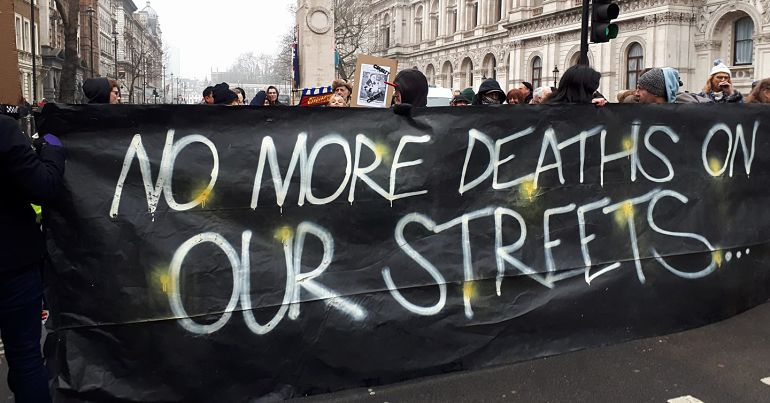 On 3 March, a protest organised by the grassroots group Streets Kitchen marched across London in solidarity with homeless people. The group chanted “no more deaths on our streets” in reaction to multiple cases of rough sleepers dying in 2018.

It started with a blockade outside Downing Street:

"Why don't you go home!" – is probably not the smartest question for an angry motorist to ask a group of homeless campaigners. Whitehall 3/3/18 #NoMoreDeathsOnOurStreets @streetskitchen pic.twitter.com/nH98Qh9ynw

The protest ended at a building near Great Portland Street that Streets Kitchen has occupied and set up as a homeless shelter.

We are gathering in solidarity with our homeless friends today because people are dying on the streets and those with power are still failing to respond adequately to the situation. Our recent involvement in setting up a night shelter with activist squatters shows just how quick and simple it is to give those in need what they need. Last night we saw 30 people fed and roofed. We don’t need money, we need buildings.

The march and occupation made it onto Channel 4 News:

The bitterly cold weather has shown the perils of homelessness and has sparked the public into action across Britain.

In Bristol, people tied warm clothes to lampposts with notes stating “I am not lost”:

It’s already 0 degrees in Bristol tonight but along Hotwell Road I spotted these scarves to #keepbristolwarm / #kbw – I absolutely love this city pic.twitter.com/2z15WvmKYW

Was rushing through Bristol to get home and out of the cold when I saw the street in front of me was filled with hats, gloves and scarves for those who don’t have a home to rush to. Each with a label: “I am not lost. If you need me take me.” Overwhelmed. #kbw #keepbristolwarm pic.twitter.com/RbgItMHBKp

Across Britain, Mosques have opened their doors to rough sleepers:

Thank you to this Mosque for opening its doors to the homeless during this cold snap. The true spirit of religious worship. https://t.co/jwfJXKcvRN

The Al-Manaar Mosque in West London called on taxi drivers to pick up rough sleepers and transport them to a warm bed:

This is one of our local mosques Al Manar, preparing for the homeless in the freezing temperatures. Muslim taxi drivers where urged to bring homeless to mosque if they saw any. #muslamics pic.twitter.com/zRFtl8v2qr

Don’t let it thaw out

These acts of solidarity and kindness are just a snapshot of what has been happening across the UK during the freezing conditions in 2018.

However, homelessness is not just a cold weather issue. No one should have to sleep on the streets at any time. Britain is the fifth largest economy in the world. And it is estimated that over 200,000 homes lie empty in England alone. Under Conservative rule, rough sleeping has increased 169% since 2010. Meanwhile, the fact that the Rough Sleeping and Homelessness Reduction Taskforce has reportedly not even met since its creation in 2017 makes a mockery of the government’s plan to eradicate rough sleeping by 2027.

It is estimated that only 2% of people without a permanent home are registered to vote. This means that come election time political parties often forget about homeless people. It is therefore up to everyone to make sure the voices of the homeless are heard. Don’t let the solidarity thaw out when the sun returns.

– Streets Kitchen need your donations. If you have camp beds, sleeping bags, heaters, duvets or anything else which you think will help, take them down to the occupation in Great Portland Street.