Another rough sleeper has died. Society must turn a blind eye no longer. - Canary 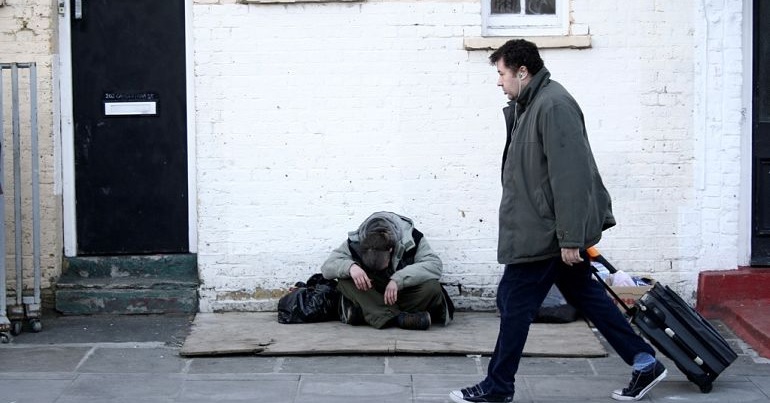 Yet many in society continue to turn a blind eye. The number of people sleeping on the streets of Britain has risen 169% since the Conservatives took control of government with the help of Nick Clegg’s flexible ‘principles’ in 2010. Yet, despite this meteoric rise, the current government is doing little to effectively combat the issue. The rough sleeping and homelessness reduction task force has reportedly not even met once since its creation in 2017. This inaction cannot continue.

The government does not give out rights and entitlements, such as housing, unconditionally in the UK. In Britain, people have to find their own shelter and money to live on. Those who struggle to contribute to the economic machine face limited compassion, and are generally ordered to alter their behaviour or face sanctions. As George Orwell wrote, we have only two paths available to us, “serve the money-god or go under”.

In this sense, the capitalist system in Britain is like a cold-hearted mafia boss. It punishes and makes an example of those who don’t abide by its core principles. In that sense, rough sleepers are the ultimate economic traitors. They stand in complete contrast to the capitalist system’s ‘ideal’ citizen who pays taxes, owns a home and makes a pilgrimage to Ikea every few months.

In the first season of US TV show The Wire, Omar and his boyfriend rob Avon Barksdale’s stash house. In response, Avon and his crew murder Omar’s boyfriend. They leave his tortured body out in the open for all to see to ‘send a message’. This is a brutal, shocking act. Yet, on deeper reflection, there are echoes of it in our own society.

The presence of rough sleepers on the street sends a message to people about how society treats those who have fallen through the cracks. They are an example of what happens to those who don’t conform. As house prices soar, wages stagnate, people pack themselves into expensive trains and wait weeks for a doctors appointment, that person lying on the street corner is a reminder of what happens to those who revolt. It is not pretty. In fact, it’s deadly.