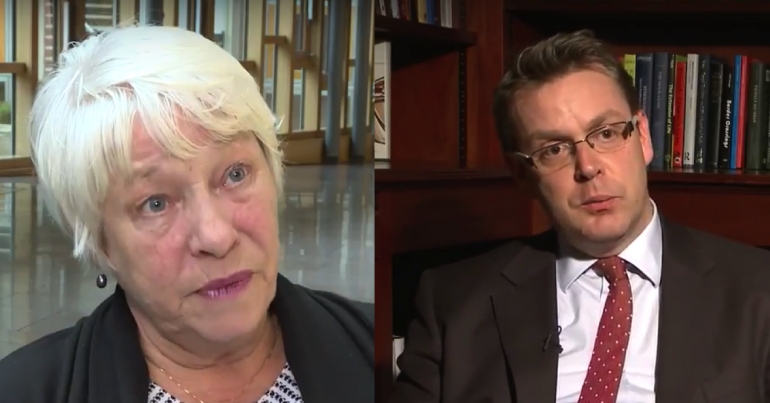 In the run-up to the Scottish Conservative Conference, professor and MSP for Glasgow Adam Tomkins decided to lecture us on poverty. But another Scottish politician hit back and called his comments a “sick joke”.

Tomkins says we have to get serious about poverty

Tomkins argues that the Conservative Party has a “moral duty” to lift the poor out of poverty. He said it has to do more than just increase benefit payouts to tackle poverty:

focusing on benefits alone without addressing the causes has failed. There is no mystery surrounding the causes of poverty. But we will achieve more only if we have an honest and robust debate about the social wrongs that drive people into poverty.

Sandra White is the MSP for Glasgow Kelvin. She was angered by the statement, and said:

The Tories lecturing anybody on poverty is a sick joke.

It is the Tories in office that have pushed families across the country into poverty through their cruel austerity agenda.

If Adam Tomkins wants to look at the root causes of poverty then he should look closer to home – to the vile, abusive use of sanctions that leaves welfare claimants destitute, or the botched Universal Credit roll-out that’s driving families to foodbanks.

This is a party that wants tax cuts for the wealthy and a Bedroom Tax for the poor, and who’ve been busy shutting down jobcentres across the city Mr Tomkins is supposed to represent.

many of the powers needed to tackle poverty – to introduce a £10 Living Wage, to end insecure work and to stop the endless cuts to welfare – are sadly in the hands of a UK government with no interest in using them.

White previously blasted Tory MSPs (including Tomkins) for supporting the ‘rape clause’. The clause’s supporters wanted victims to prove they’d been raped to receive tax benefits for a third child if that child had been conceived as a result of rape.

National Energy Action (NEA) and climate change thinktank E3G published a report showing that Britain has the second highest rate of excess winter deaths in Europe. And we could prevent the 3,000 deaths that result from fuel poverty each year. As Pedro Guertler from E3G said:

This epidemic is entirely preventable and E3G and NEA are calling on the UK Government to reinstate public capital investment in home energy efficiency to fix the cold homes crisis.

There is a wealth of research showing how austerity is driving poverty. The Joseph Rowntree Foundation has underscored that nearly 400,000 more children and 300,000 more pensioners are living in poverty under the current government. The Institute for Fiscal Studies (IFS) stated that these worrying increases in child poverty are linked to benefit cuts.

The IFS also predicts that, in four years’ time, Tory welfare policy will result in 5.2 million (37%) children living in relative poverty. As The Canary previously reported, since the Conservatives came into power in 2010 there have been an extra 1 million people living in poverty.

Looking at all of this evidence together, it’s obvious why White was so irked by Tomkins’s comments. For poverty to end, so too must austerity.

– Read more articles from The Canary on poverty and austerity.